Counterfeiting, Knock-Offs and Trends in Lingerie: What’s the Difference?

There are lots of opinions on copying in the fashion and lingerie world, but not all copies are the same. Generally speaking, they can be broken down into 3 categories: counterfeit goods, ‘knock offs’ and trends. So what’s the difference between them and what is it acceptable (or not) for a lingerie brand to do? 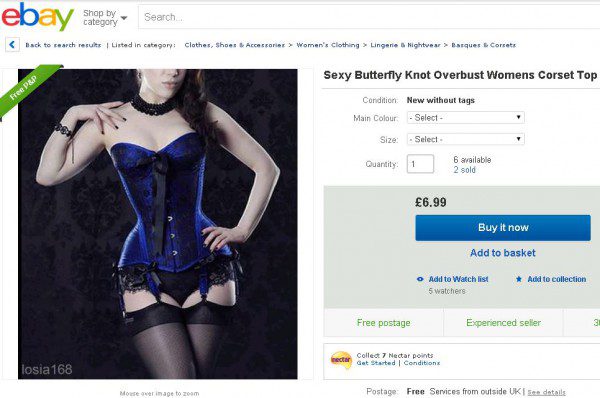 Corsets for sale on eBay for £6.99 each. Pictured is a Morgana Femme Couture corset that costs £364 (including the garters).

Counterfeiting is selling one product whilst leading customers to believe that it is another. In its worst form, that means a store selling you a product stating that is by Brand A when it’s actually by Brand B – you have been outright lied to. In my experience however, this is pretty rare when buying lingerie.

Another type of counterfeiting is using images that show a different product, and this is more common, especially on sites like eBay. In this case, you’re sold a product online being told, correctly, that it’s made by Brand B but unaware that the product photo actually shows Brand A’s (probably much nicer-looking) garment. The retailer might not be lying about the brand in the text that they use, but they’re still misleading you. 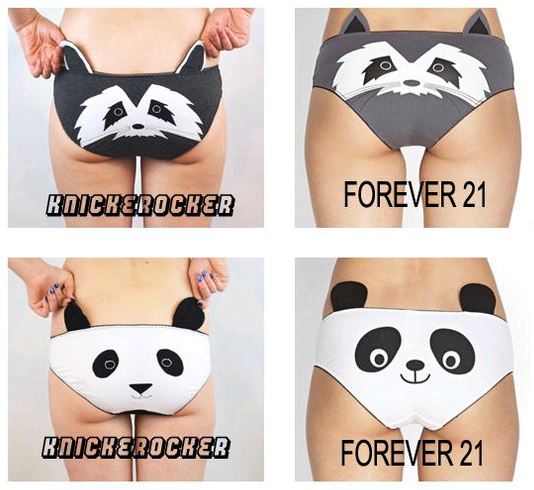 Often, when people talk about brands copying other brands, this is the type of copying they mean – knock offs. Unlike counterfeiting, in this case the brand is not making any claims (either through text or imagery) that the product is anything other than it is. They’re selling it as Brand B and it is Brand B, and the photo shows Brand B. The controversial bit is that it looks just like a design by Brand A.

Whether knock-offs are acceptable or not is a tough one because opinions are so divided. I’m not even 100% sure what my own opinions are, though I don’t agree with exact copies.

The first thing to consider is how similar is the copy? Is it an exact copy or does it copy only elements of the design, like the cut-outs on the bras at the top of this post? How big or intricate does a design element (such as these cut outs) need to be to make it ‘belong’ to a particular brand, and other brands that use it be copying?

For example, someone had to be the first one to put a bow between the cups of a bra or ribbon ties at the sides of knickers, but nowadays so many designers do it that it can hardly be classed as copying. Now that so many people are adding ‘strappy’ details above bra cups is it copying any more, even if the strap placement is identical, or is it just a generic design trend?

The second thing to consider is whether the copy offers something considerably different to the original design. Are they selling a similar-looking product in the same size range and at the same price, or are they catering to a different market – one with a lower budget or a bigger cup size?

In order for a lingerie or fashion brand to win a legal case over copying, they usually have to prove that it has caused them damages i.e. a loss of profit. If their lingerie costs £100 and the copy costs £10, how many of the customers buying the copy would have bought the £100 version if the £10 one didn’t exist? Not many. And as the brand doing the copying, if the law seems to be on your side are you really doing anything wrong?

Three bras with the same cut-out detail at the gore, but all clearly different designs. From left to right: Lost In Wonderland, Karolina Laskowska, Janay Intimates.

As more and more brands create their own version of a popular product, it starts to become a trend. If you’re the only brand copying someone’s design you might be accused of creating a knock-off, but if you’re one of ten – or a hundred – it’s less likely anyone’s going to say anything. Unfortunately for the original designer this might seem like a double blow; they’re being copied not just once but many times, and it also becomes more acceptable to the masses with each new copy that comes out.

However, this is just how fashion works. The industry thrives on trends and wouldn’t exist as we know it if no one ever copied anyone.

It’s also pretty impossible to define the exact moment copying becomes a trend. There’s a lot of crossover and there are garments that some people would call a knock-off and others would say are just following the same trend.

The difference that I see between knock-offs and trends is in how similar (or rather, how different) the copies are. Copying a trend is not the same as copying an exact product. The designer doing the copying here takes the general idea of the trend and puts their own stamp on it – the end product might be similar, but it’s also clearly different.

What is your take on copying in the lingerie industry, and what do you find acceptable or unacceptable?

Read more: Copycat Lingerie Brands: A Cheaper Alternative or Something to Avoid?

We were taught in school that your design has to be 30% different in order to avoid legal problems. Forever21 and asos are both obviously failing at that number. Also it looks really bad legally if your design comes out the season after the” copied” item. Sometimes it does happen that companies come out with the same design at the same time. It’s hard to tell sometimes. I have some styles that I’ve seen other companies make too. Are they copied? Don’t know. Probably just a coincidence. I really hope knickerrocker is pursuing Forever 21.

[…] on the blog I’ve discussed what the difference is between counterfeiting, knock-offs and trends, and whether it’s ever okay to produce (or buy) ‘copycat’ lingerie. Copying is […]

I think it’s definitely possible for 2 designers to come up with a very similar design at the same time. Especially if they’re following general trends of the moment then they could easily come up with something similar. But some designs are just TOO similar to be coincidence!

I Googled ‘cartoon raccoon face’ to see if Forever21’s (or should I say Knickerocker’s) design was just a very common way to draw a raccoon but nope, 100% copying there! I hope she is pursuing them too, but it can be prohibitively expensive for an indie designer 🙁