Knock-Off Lingerie Vs. The Original: What’s the Difference in Quality?

Previously on the blog I’ve discussed what the difference is between counterfeiting, knock-offs and trends, and whether it’s ever okay to produce (or buy) ‘copycat’ lingerie. Copying is rife within the lingerie industry (and within the wider fashion industry too) – here are two knock-offs I’ve simply stumbled across without even looking for them this month alone: 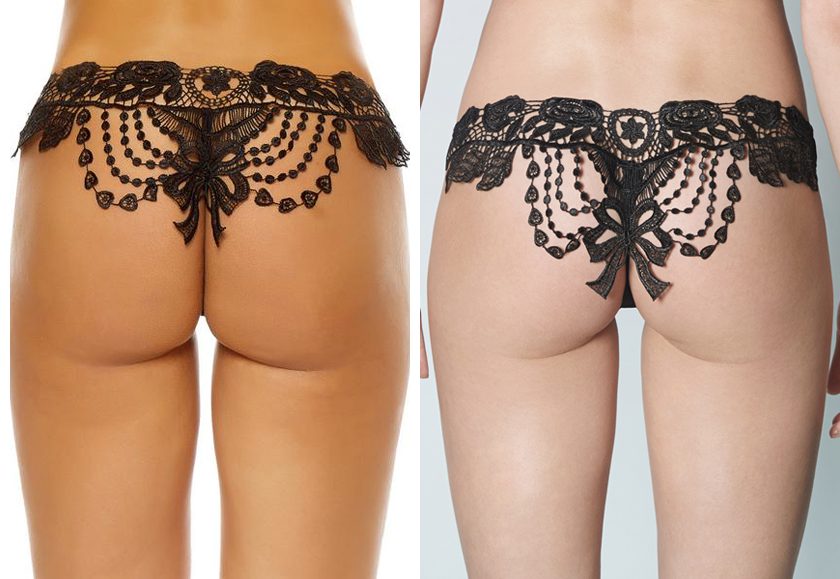 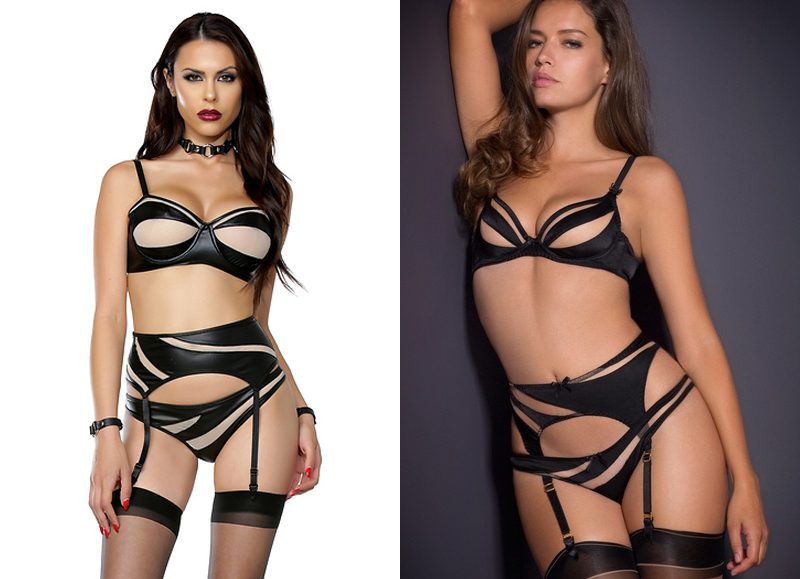 Evidently, the knock-offs are much, much cheaper. It’s practically never the case that luxury brands copy inexpensive ones, and that’s part of the reason they cost more – they’ve spent time developing novel designs and money hiring talented designers (or paying themselves) to do it, and the cost of that is recouped in the price of the product. Knocking off someone else’s design doesn’t require that expense – you can just ship it off to a factory that cares more about money than ethical business practises and tell them, “copy this”.

In fact, and I am just guessing here, the product may even be taken apart and used to create a sewing pattern, because why spend time drafting one from scratch when you have the result of all that work by someone else right in front of you? Creating patterns is time-consuming for brands that care about the fit of their products, often requiring multiple rounds of sewing samples, model fitting, tweaking the pattern to improve the fit, and re-sampling and repeating until the fit is just so.

Of course, these aren’t the only reasons knock-off lingerie is cheaper. Probably the first reason that springs to mind for the lower price is ‘lower quality’, which can be anything from poorer fit for the reason described above, to cheaper fabrics and inferior construction. But just how much lower in quality is a knock-off compared to its original?

I could have picked any knock-off lingerie to focus on for today’s post and I chose two Be Wicked sets for three reasons. Firstly, simply because I own some of the originals which made a comparison easy. Secondly, because whereas many lingerie brands from whom I’ve seen knock-offs do mostly otherwise create original work, Be Wicked seems to be copying other brands left, right and centre. I tweeted some comparison pictures earlier in the year showing clear likenesses to Agent Provocateur, Ann Summers, Dita Von Teese, Lascivious and Dirty Pretty Things creations in Be Wicked’s current range, and those were just some of the ones I recognised from brands I’m familiar with.

And thirdly, I wanted to see these Be Wicked lingerie sets up close because I had a sneaking suspicion the products in the photos were not even Be Wicked designs, but the original by another brand! They were just too similar – too identical – that I struggled to see how Be Wicked could have created such an exact copy for such a tiny fraction of the price. Would the lingerie I received actually be what was shown in the picture, or something very different?

Agent Provocateur’s famous Annoushka range is made from delicate French Leavers lace, so called because it’s made on huge, expensive Leavers machines that each have tens of thousands of moving parts. The resulting lace isn’t cheap, and Agent Provocateur charged £150 for the knicker alone. Be Wicked’s Kate or BW1642 style on the other hand costs roughly $30 (~£23) for the full set (price varies slightly between stockists; Be Wicked don’t sell direct to the consumer themselves). The lace pattern looked like a perfect dupe, so was it? 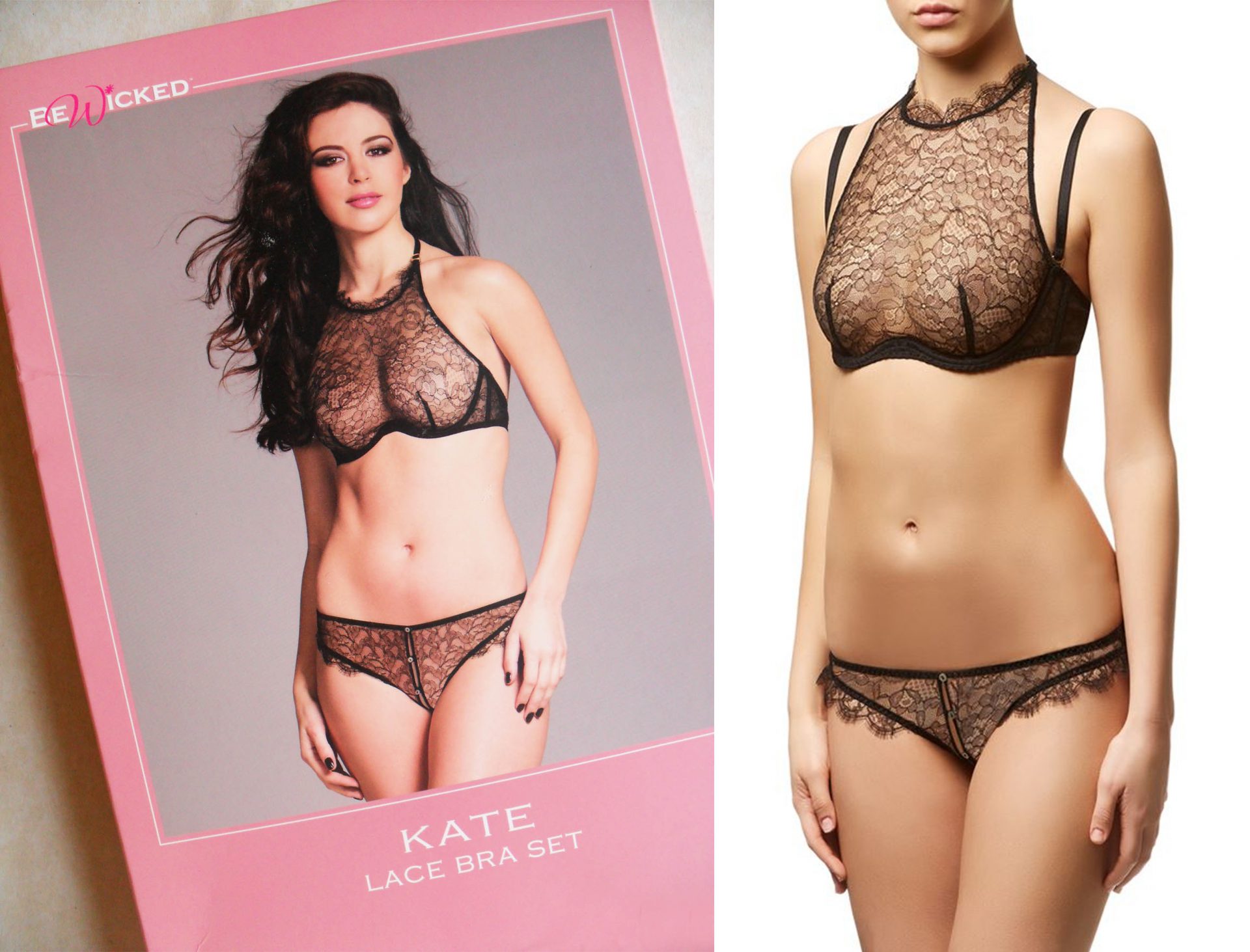 Left: The photo on the Be Wicked packaging
Right: Agent Provocateur’s Annoushka set 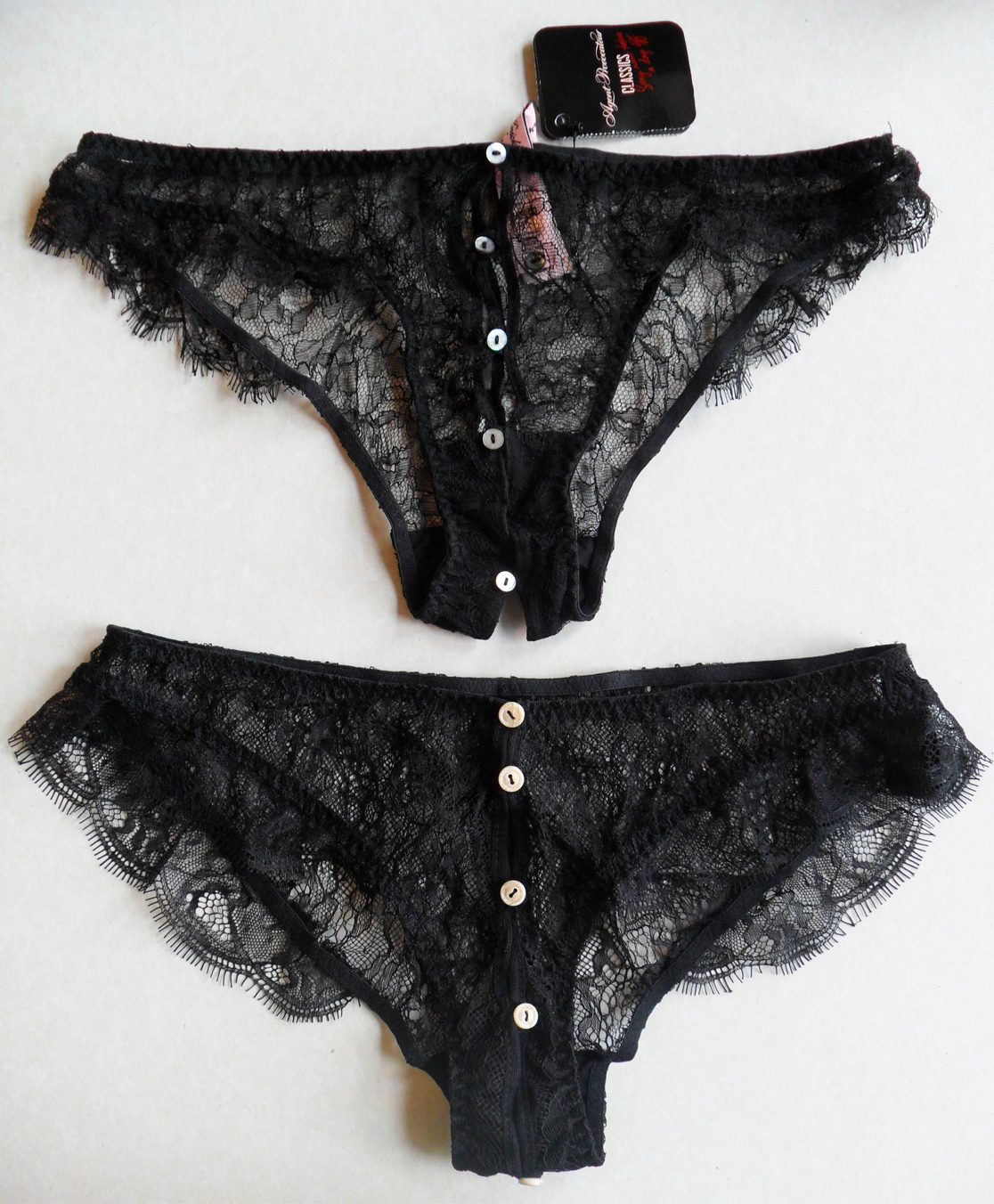 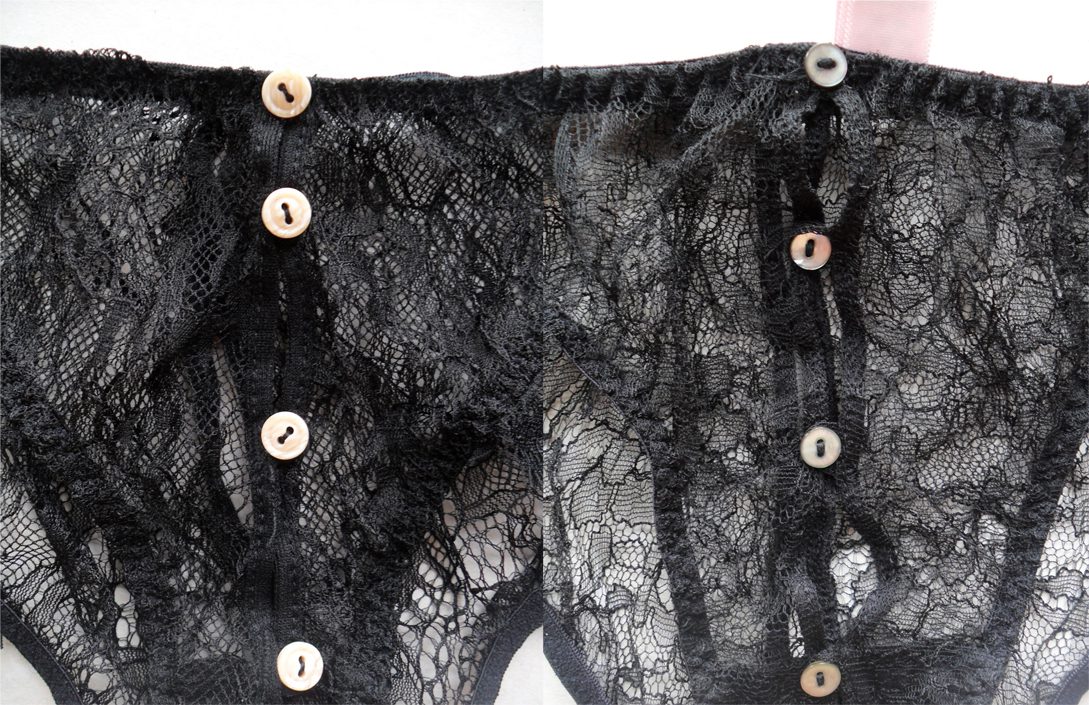 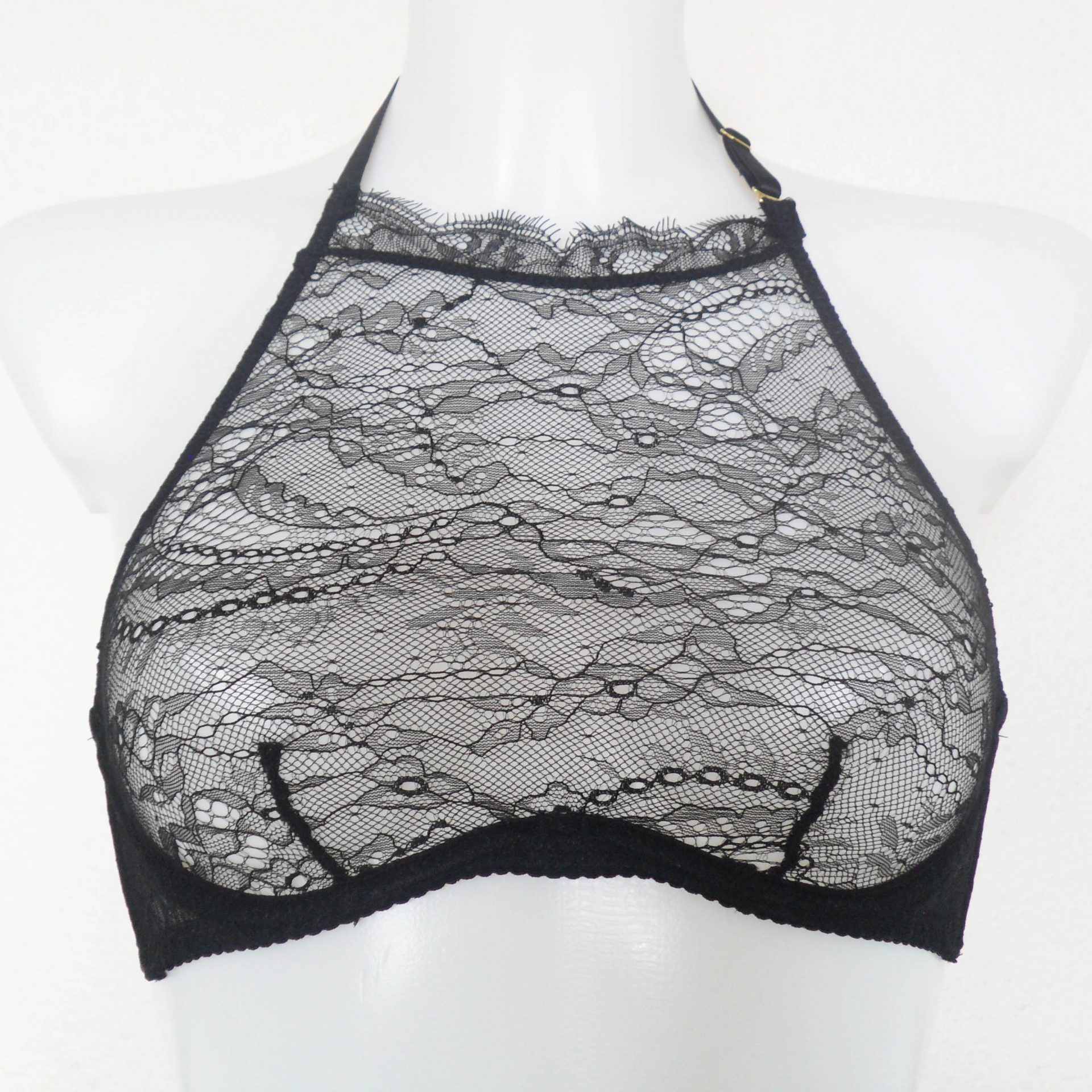 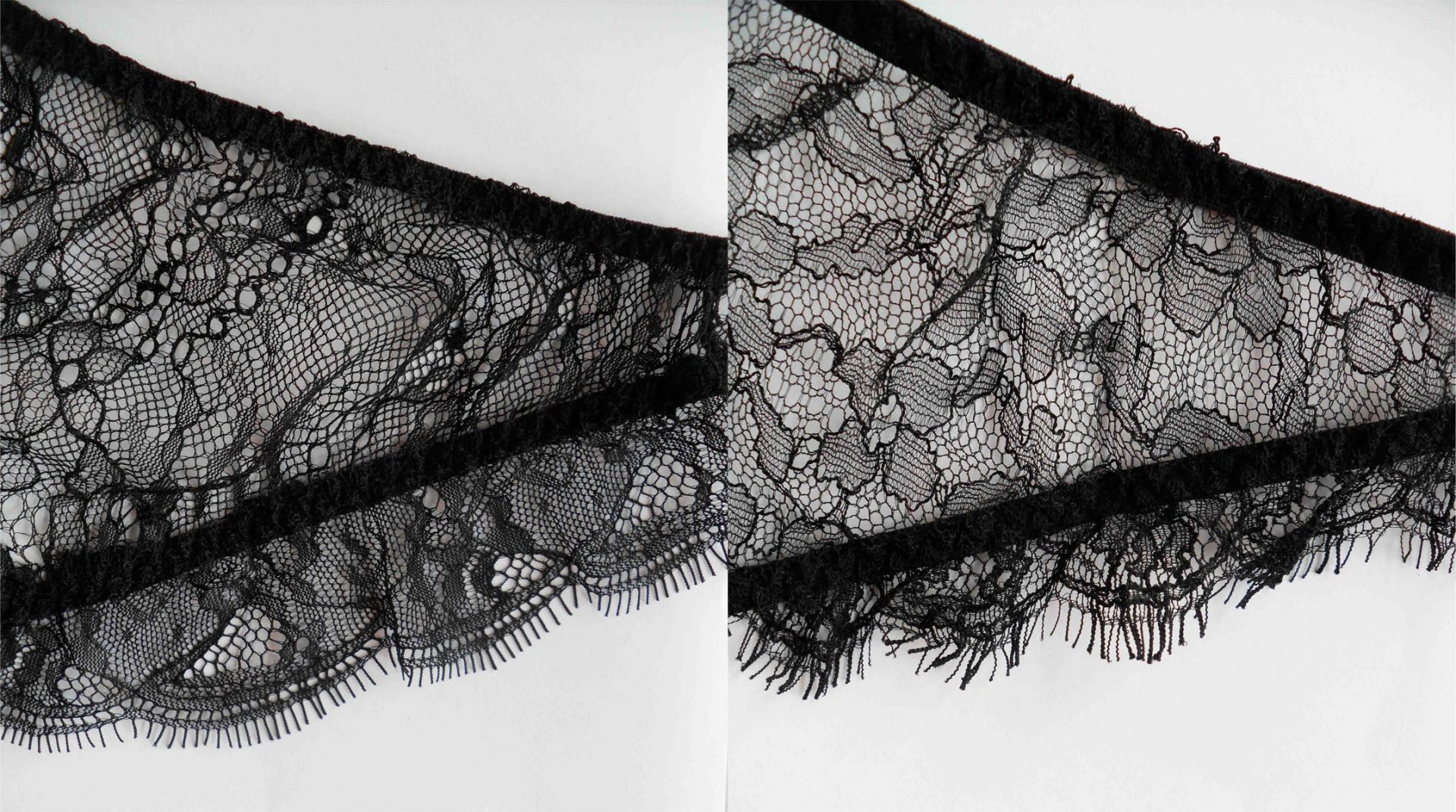 No, it wasn’t. It was pretty, but it definitely wasn’t the same lace as the product on the packaging. See those ‘chains’ of circular holes? Not in the brand’s photo. There are more differences if you look closely but even just based on the lace, I’m positive that the lingerie I received is not the same as what’s in the product photo. But let’s put that to the side for a moment and get back to the main point of this post – what are the quality differences between the original and the copy?

Not only is the lace pattern different, but you can see that the eyelash trim is plainer-looking on the copy. The buttons on the Be Wicked set are, again, nice but not as nice as the luminescent pearl buttons on the original.  The differences are more than just what’s visible in a photo too – I asked my fiancé for his non-lingerie-expert opinion and though he couldn’t tell which was the expensive lace, he immediately noticed that only the elastic on the Agent Provocateur knickers had a softer, plush backing for comfort.

A note on this section: the light pink colourway of Dita Von Teese’s Star Lift bra set is from 2013, and the design has changed a little since then. For example the lace insert is left sheer on the back of the Star Lift thong I own in purple but was overlaid onto the satin on Von Teese’s light pink version, hence I wouldn’t highlight this as a quality difference between the two sets I’ve photographed – Be Wicked have simply copied the older design. In the interest of a fair comparison I will only be talking about quality differences between the Be Wicked set (RRP approx. $30 or £23) and the older Dita set (RRP £50 for the bra and thong). 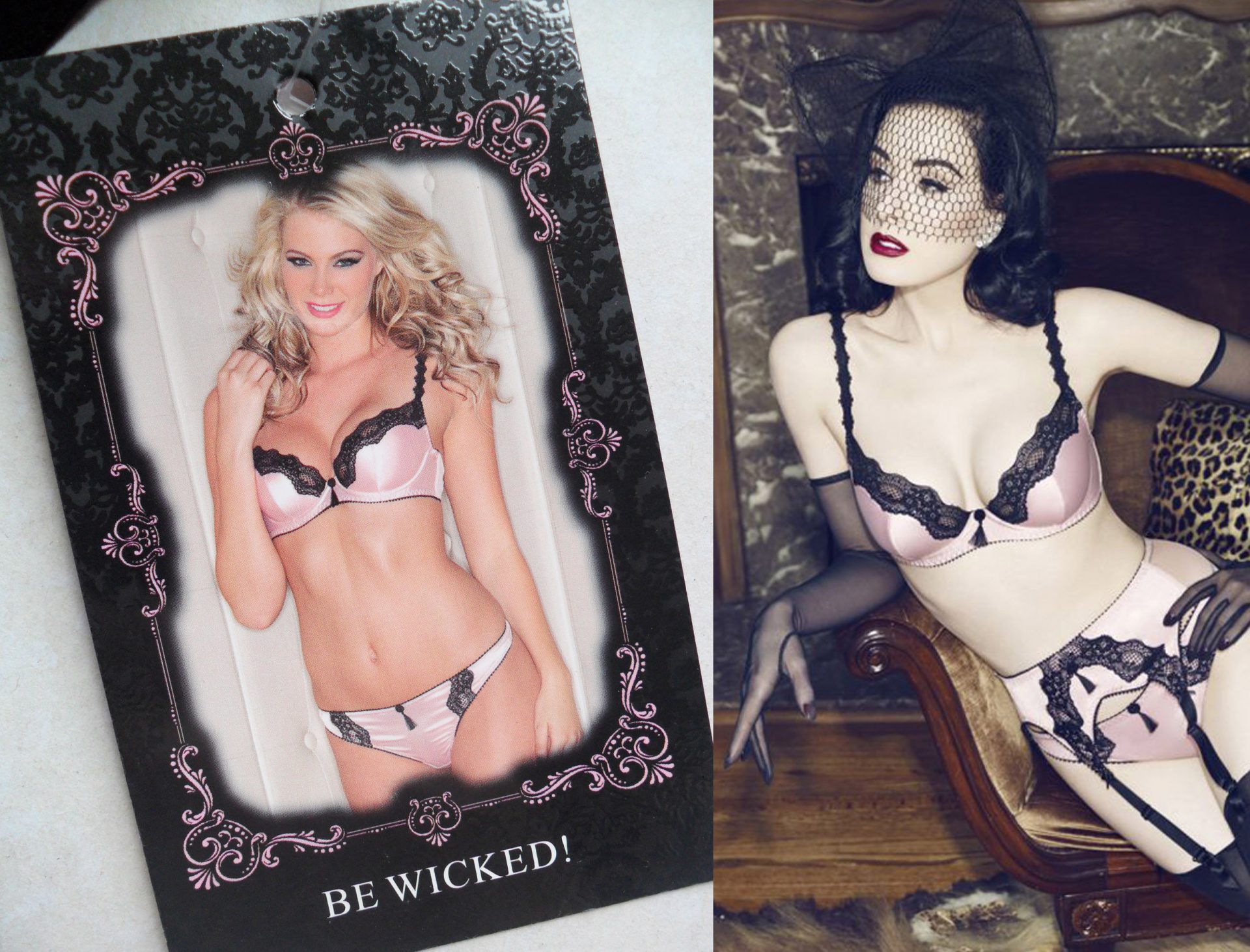 Left: The photo on the tag of the Be Wicked set
Right: Dita Von Teese’s Star Lift set in light pink 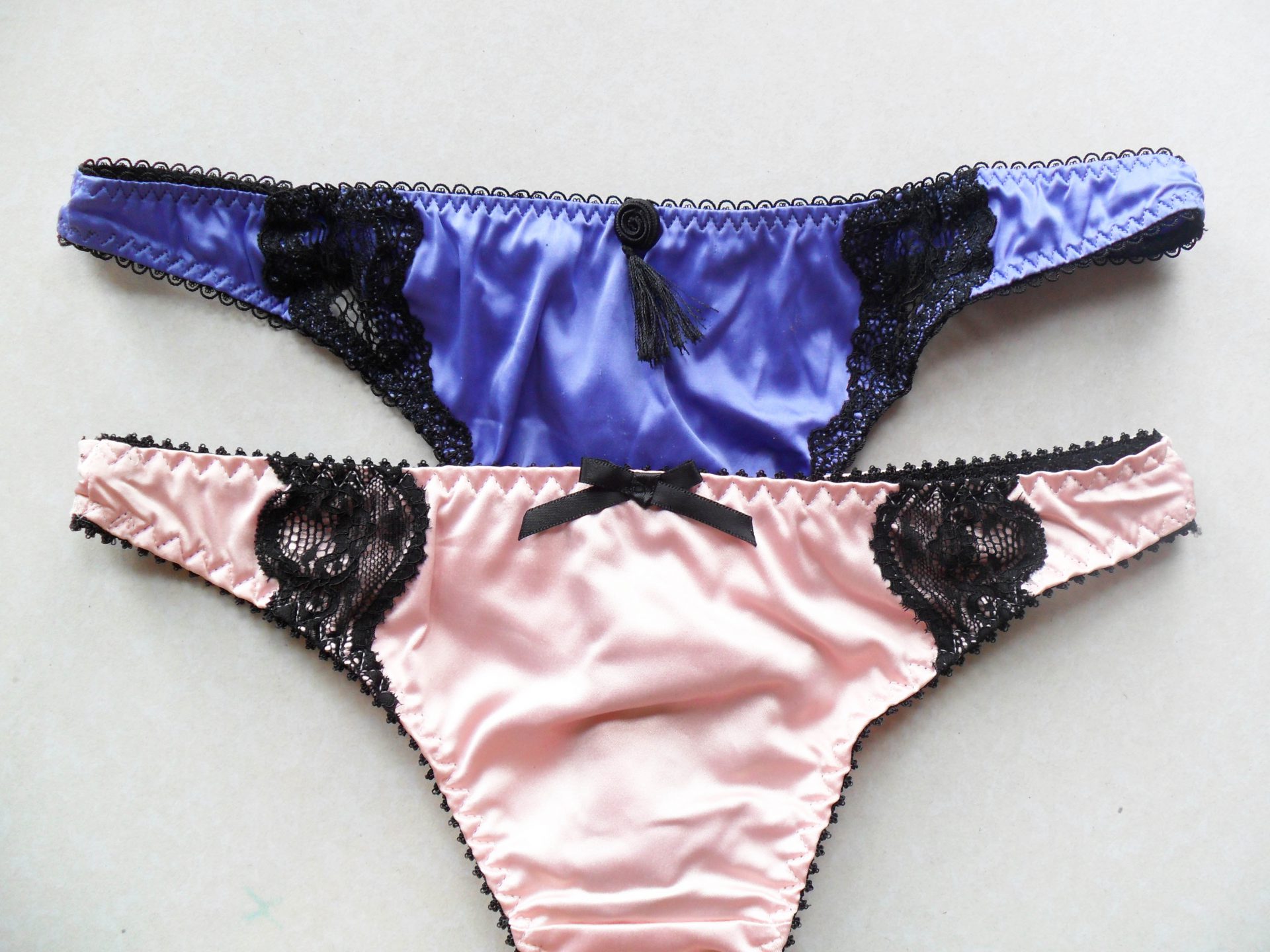 Underneath: Dita Von Teese
Laid on top: Be Wicked 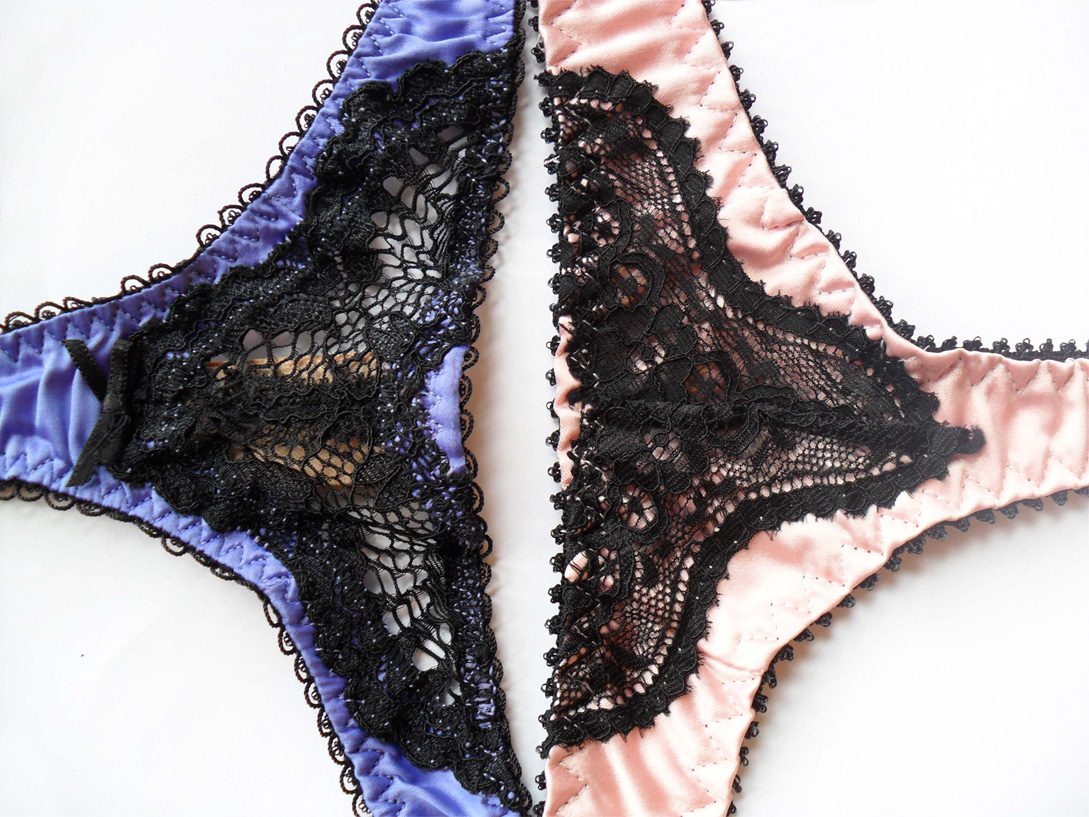 It doesn’t require eagle eyes to spot right off the bat that the Be Wicked set has ribbon bows in place of tassels – again, this is not what is shown in the product photo. What if I’d bought this set specifically because I loved the tassels? As for the satin bow that is on the Star Lift set, a little one at the back of the thong, that’s nowhere to be seen on the copy. It’s little details like these that make pricier lingerie pricier, but also nicer.

Speaking of finer details, the strap elastic on both sets is quite pretty, but I would say it is a bit more detailed and expensive-looking on the original. (Also notice how the Be Wicked elastic, which is asymmetrical, doesn’t look the same as it does on the hang tag photograph, where it has a symmetrical shape). 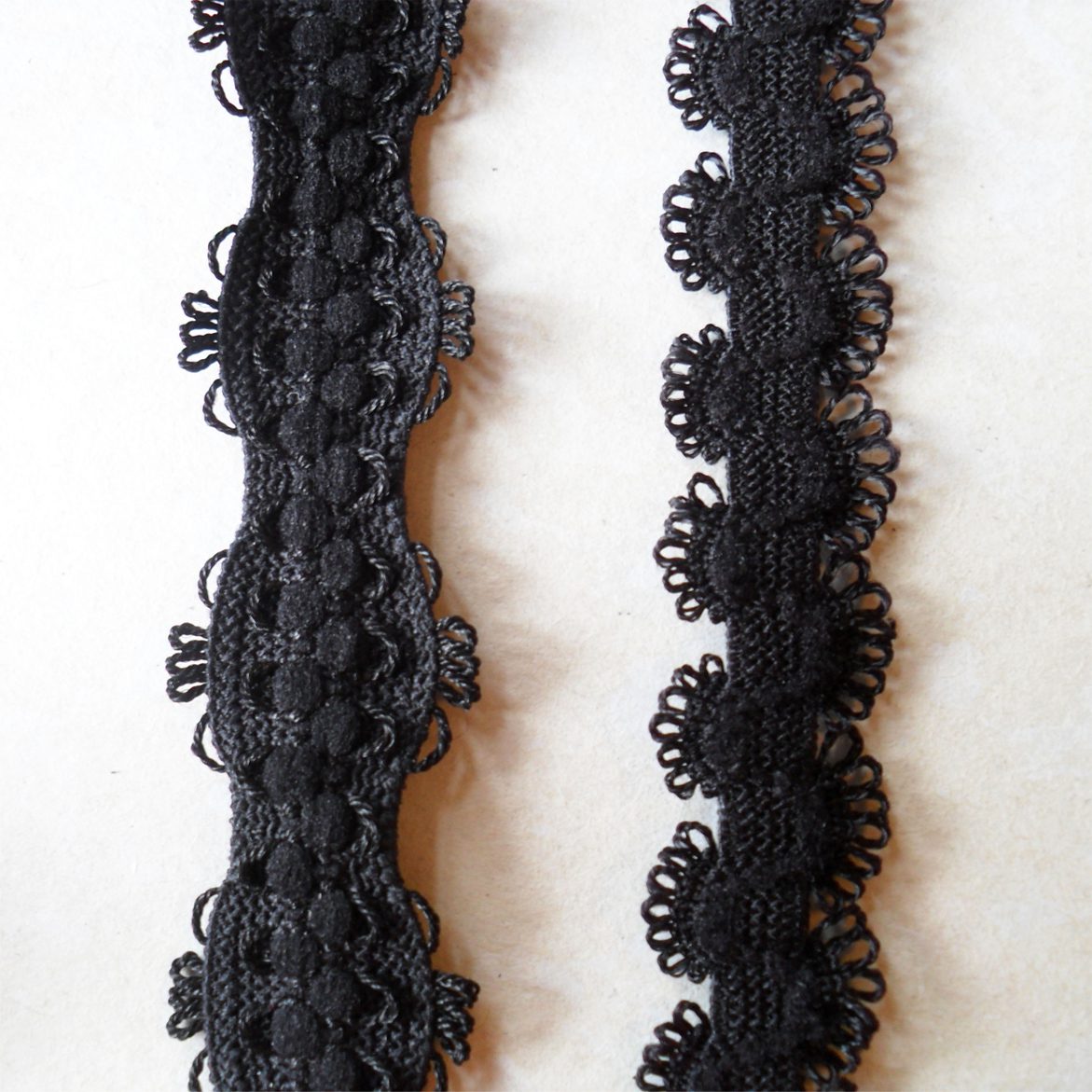 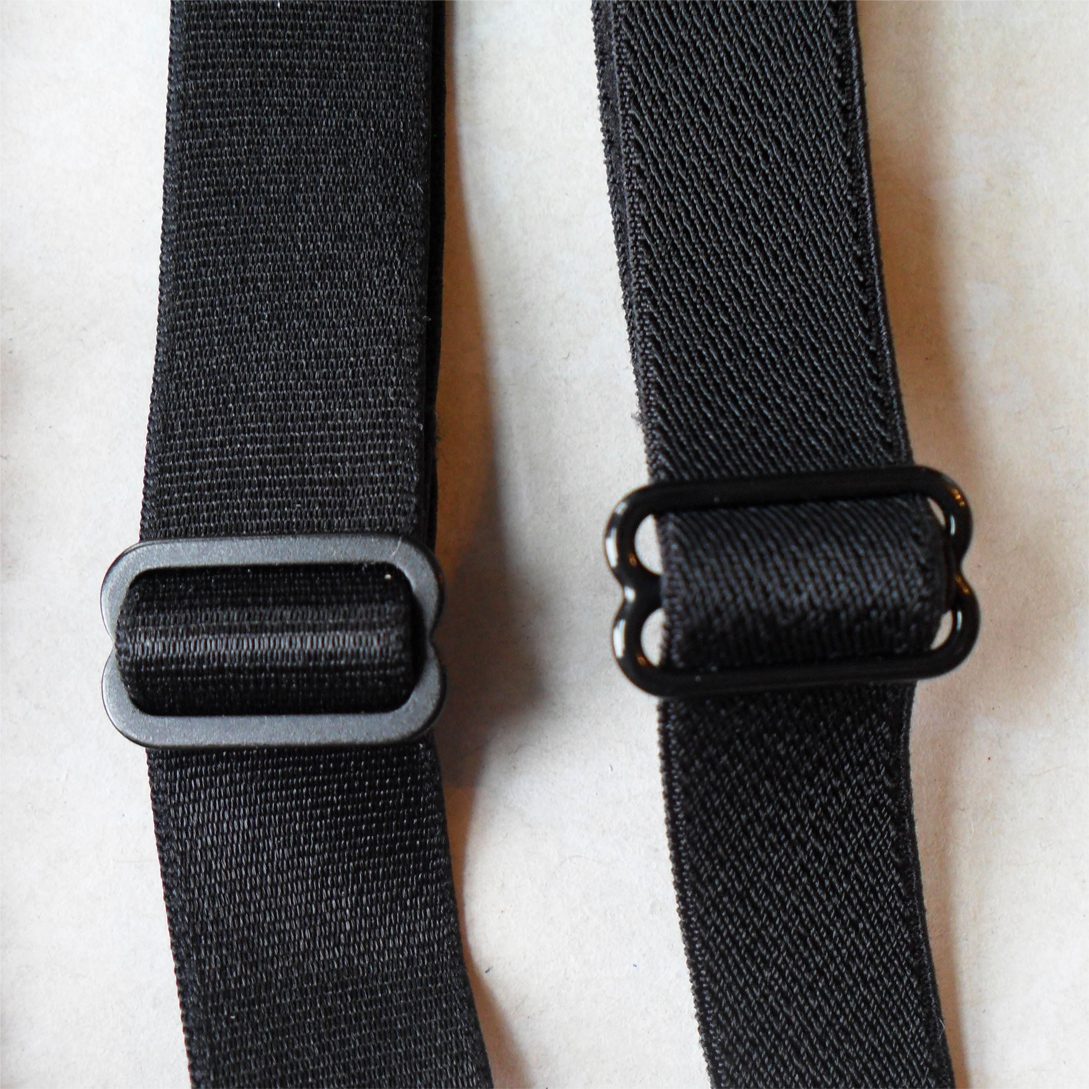 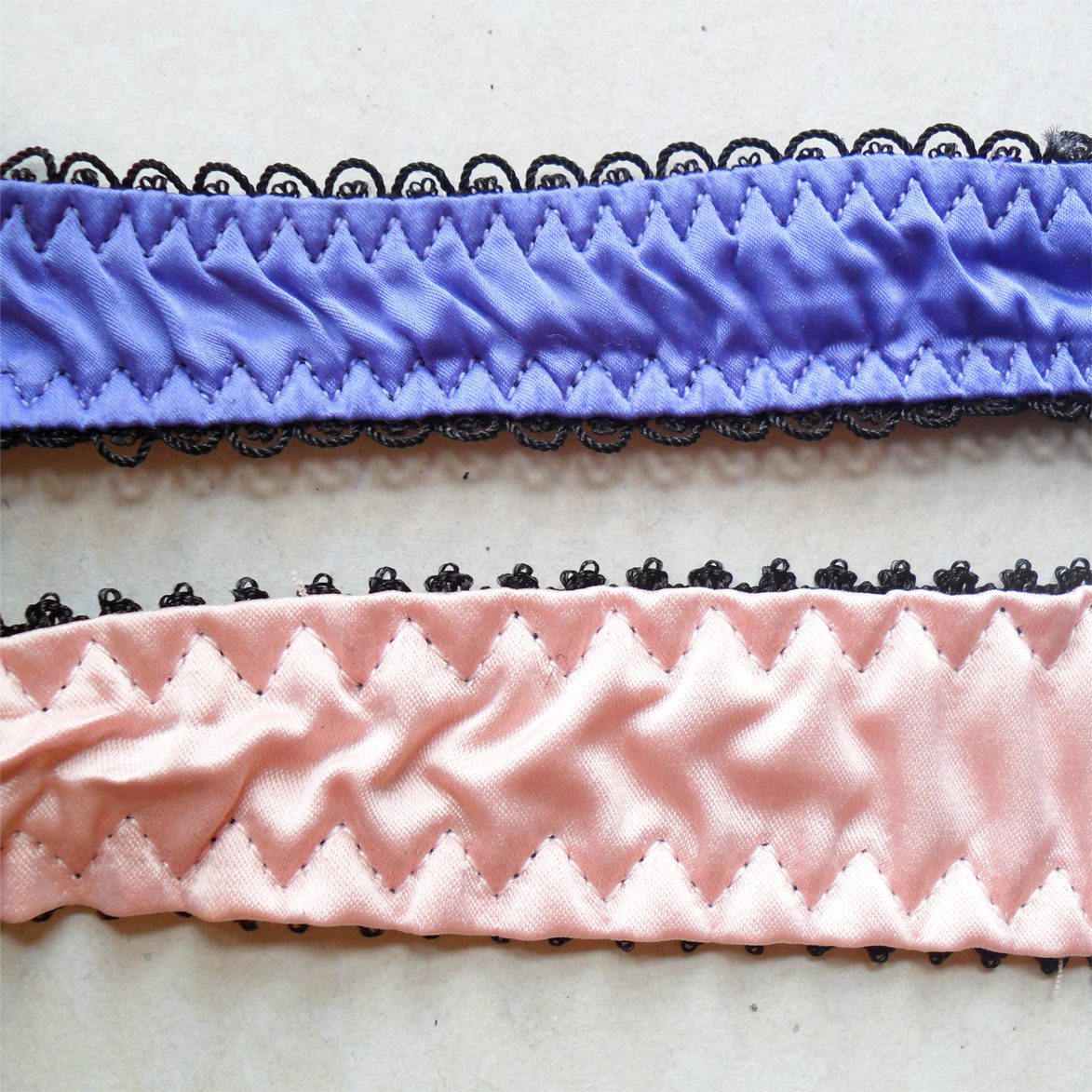 The quality of lingerie isn’t just about how pretty it looks though, it’s also about how well it’s made. The sliders on the straps of the Be Wicked knock-off are of a cheaper variety and, more importantly, not quite the right size for the elastic. Not only does this look messy, it affects the function too – a slider that doesn’t grip the elastic tightly will slowly let it slip through, so that you find yourself adjusting the strap length more often.

You can also see that less care has been taken when sewing the picot trim. It is perfectly aligned on the original set, but on the Be Wicked thong it looks hastily applied – it’s uneven, being visible in some places and barely poking out from under the satin in others. Cheap lingerie may cost less, but the real price you pay is a lack attention to detail. I didn’t even receive the detachable shoulder straps that were supposed to come with the Kate bra!

I should also mention that the Star Lift bra comes in regular band-and-cup sizes, whereas the Be Wicked copy comes in S, M, L and XL so you are not going to get such a precise fit.

Maybe you don’t care about all that. Maybe messy picot edging, slightly too-large sliders, plainer buttons and an imperfect fit are all things you can put up with to ‘get the look’ for a fraction of the price. I have to hand it to Be Wicked, these are very good copies. The Kate set in particular is not as different to the Agent Provocateur one as I had expected, and if it were an original Be Wicked design I would have said it was well worth its £23 price tag. But, it isn’t original, and as I wrote in a previous blog post:

…by buying the cheaper copy you’re fuelling an industry that makes its money from other people’s hard work. Brands like Agent Provocateur spend a fortune on design, striving to come up with new and original ideas every season, and when another brand replicates that exact design it takes some of the originality away from the original brand or designer. Plus, it’s just not nice…

In Be Wicked’s case in particular, they’re not only knocking off other brands but deceiving their customers too, with product images that don’t show the same lingerie you’ll end up receiving. No wonder the Kate set looks beautiful for being £23 in the photo, if you’re actually being shown a £310 one! As always, when something looks too good to be true, it probably is.

What are your thoughts on knock-off lingerie? Does the lower price make up for the reduced quality? And even if it does, where do you stand on the ethics of buying designer copies?

As a lingerie imported and wholesaler we spend massive amounts of time and effort fighting counterfeits of the brands we look after, mostly these come from China via Alibaba and others, and are then sole on eBay and Amazon etc as well as other websites, these counterfeits not only damage our branding with their cheap quality, but also are sometimes even dangerous being made from highly flammable materials that would not be used by a reputable EU/US based business.

Luckily there are many tools available including eBays VERO program that you can use to fight the frauds.

Thank you for writing this! It is definitely something close to my heart and something we deal with on a very regular basis. It is so sad to see knock offs of pieces you pour your heart and soul into creating, but even more so the part that I find the hardest to deal with – is the ethical issue of who actually made these fakes? As a small independent brand transparency about production is at the centre of what we do – the humanitarian crisis of the workers who sew fast fashion is plagued with huge brands trying to make cheaper and cheaper clothes. If these big brands cant seem to monitor who sews their clothes – can you imagine how the workers sewing fakes are treated? There is no way of knowing if the workers are paid at all, how old they are, if they get breaks or are forced to work for many more hours than they legally should. This for me is the absolute worst part. The more we can speak about it – from all angles – the better!