Disclosure: I received this set free of charge from Comptoir Des Dessous to review. All opinions are, as always, 100% honest.

Comptoir Des Dessous is an online, French lingerie retailer with a rather interesting backstory. The site was initially co-founded by two sisters who had previously built up a brand of lingerie stores dotted throughout France, that were so successful they were sold in 2008 to the Etam group. Comptoir Des Dessous stocks literally thousands of items from dozens of brands, and I was instantly drawn to one of them, Impudique.

Impudique (which translates to ‘indecent’ or ‘unchaste’) is a new discovery for me, and it was lingerie love at first sight! The brand was founded by Charlotte Catanzaro, daughter of French fetishwear and lingerie designer Patrice Catanzaro. The inspiration from her father’s work is clear, but the fetish aspect has been toned down – there are ouvert cups and straps galore, but the shiny vinyl of Patrice Catanzaro’s designs has been replaced with a much more wearable sheer mesh.

I genuinely do love and would wear every look in Impudique’s debut collection, Audacieuse, so it was incredibly tough picking something out to review. In the end, I mixed and matched – this Mia bra is supposed to be paired with a 2-in-1 thong and skirt combination, but the tattoo pattern of the Hannah knickers was just too awesome to pass up! My order arrived from France in a little under 3 weeks, with a flat-packed Impudique box in the parcel so that I’d have a nice way to store it or present it were I buying as a gift. 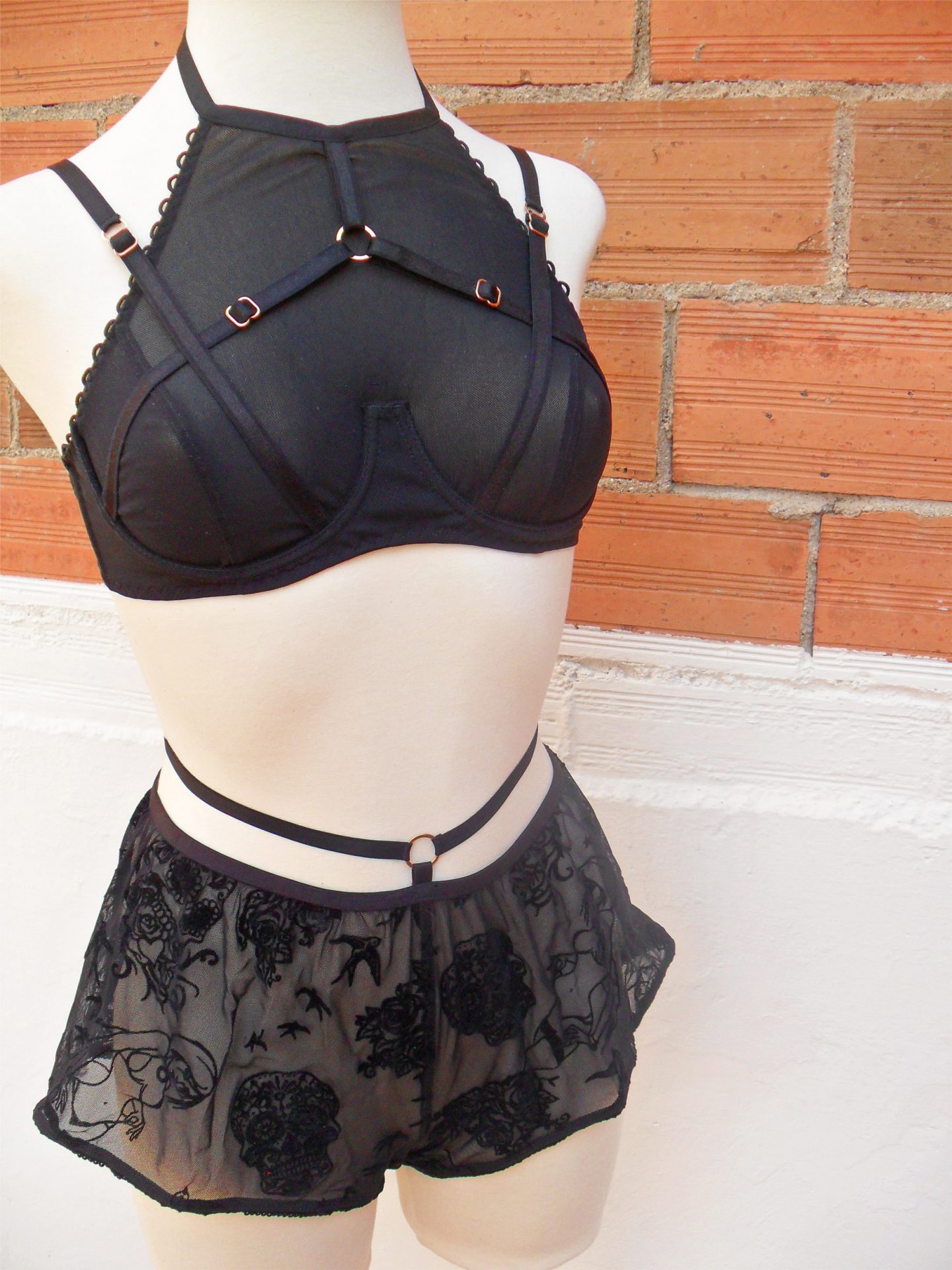 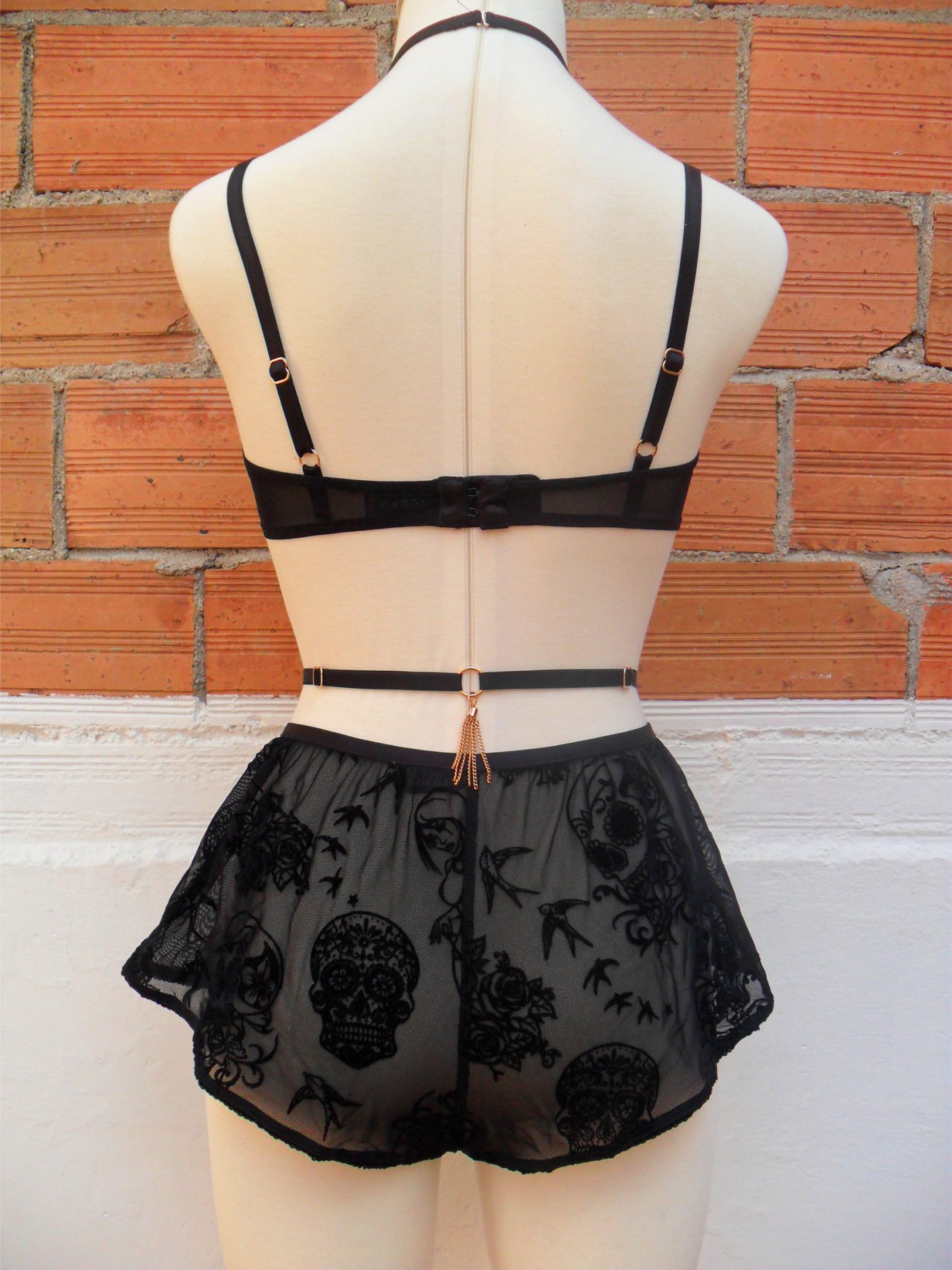 The Mia bra is an on-trend, high-necked style, made from a single panel of sheer mesh with a cupless bra laid over the top of it. The strapping details are simple but effective, with metal hardware in a bronze-gold colour. My only small quibble would be that the back of the bra is plainer than I would have liked, or expected at this price point, but I do like that they’ve used a satin hook-and-eye which looks a little more luxe than a standard matte one would.

It’s the French knickers though that are the stand-out piece here, made from stretch mesh topped with skulls, swallows and pin-ups in flocked velvet. Not only is the fabric really eye-catching and unusual, but I also love the waist strap detail which is finished with an adorable little metal tassel at the back. Overall, definitely a design I haven’t seen anywhere before! 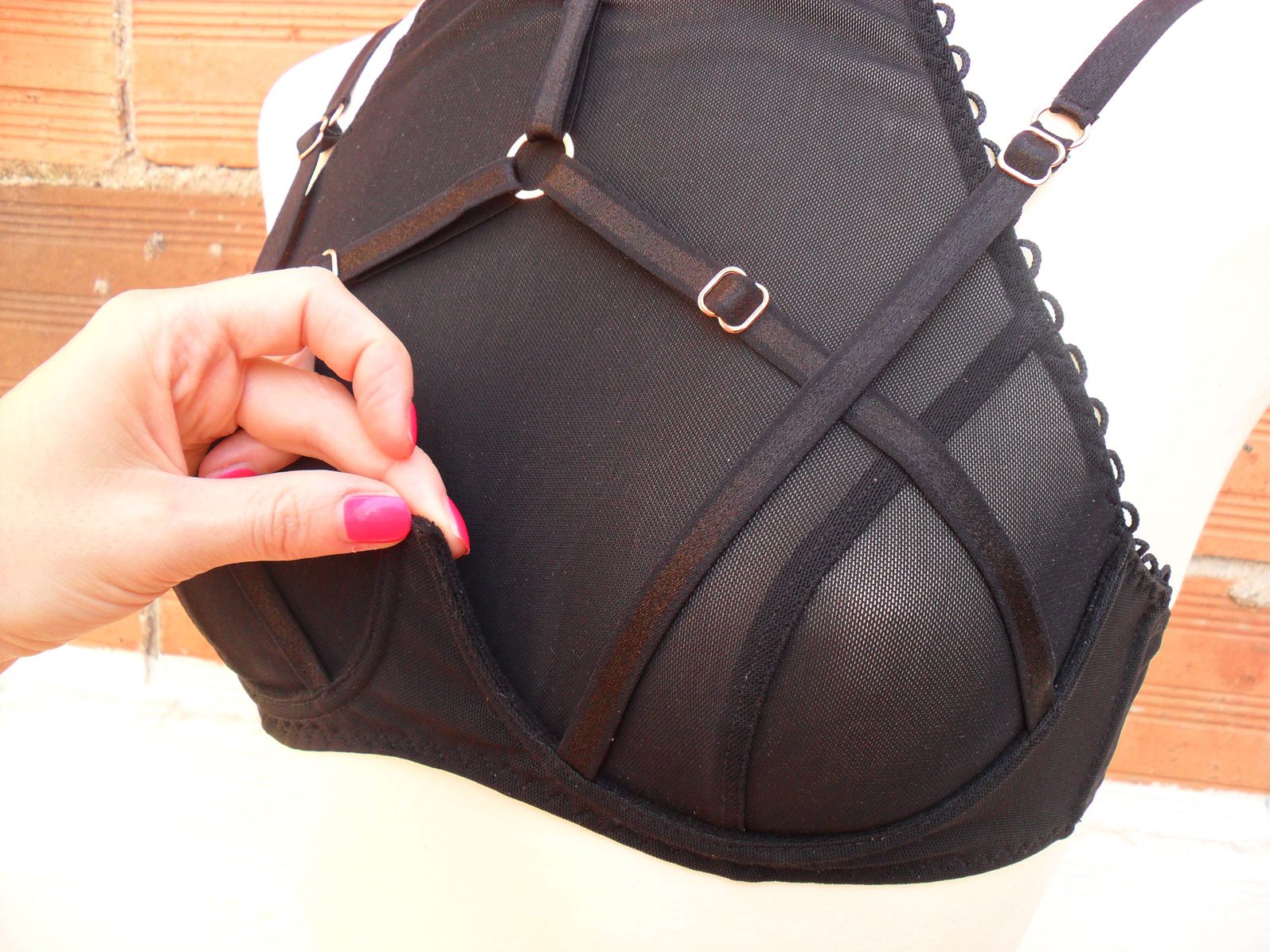 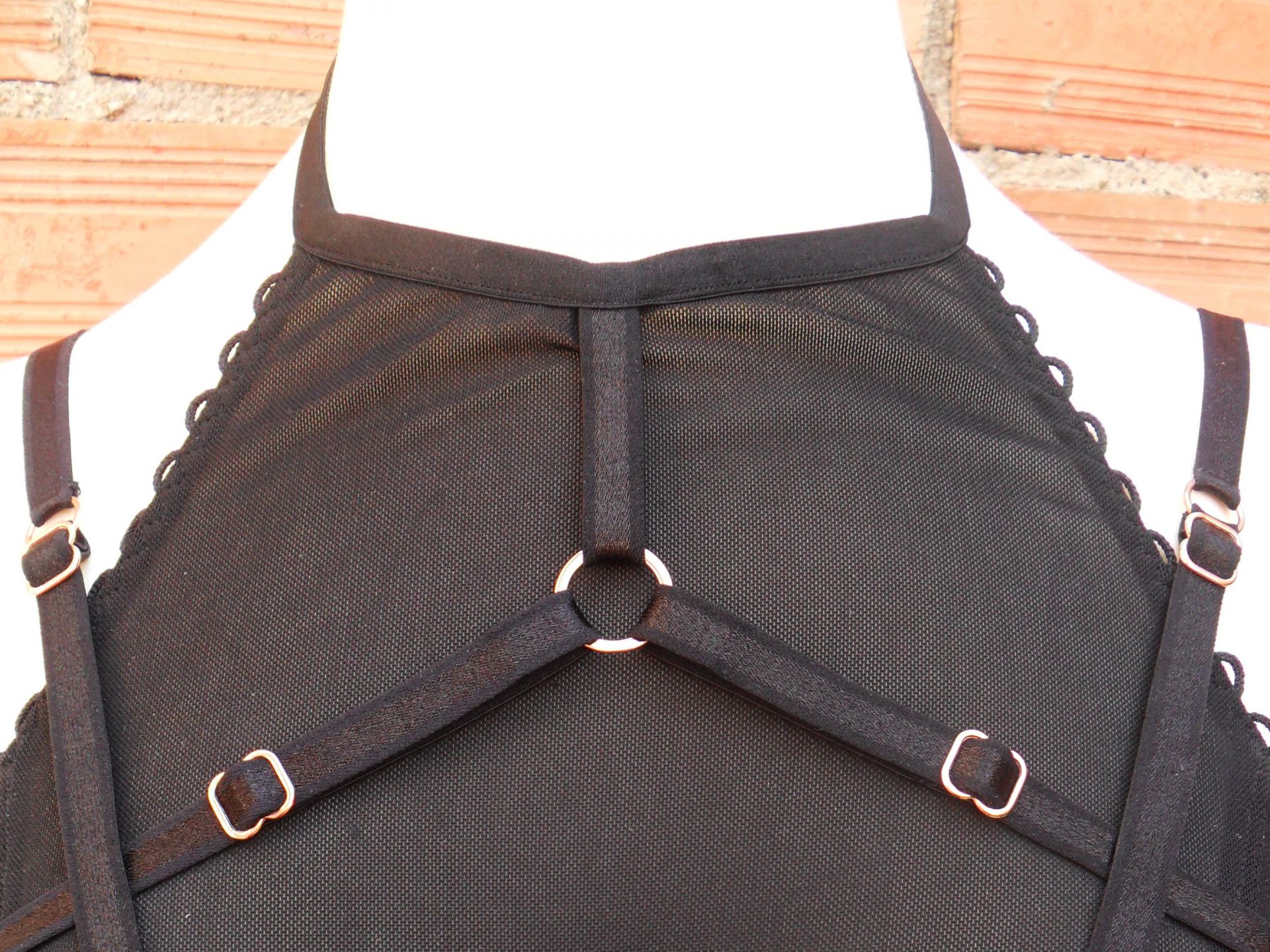 Impudique lingerie is made in France. Both pieces here are made from single-layered stretch mesh, with satin elastic trims and pretty picot edging. The bra, as I’ve mentioned, has the underwires layered over the mesh, which I like because it makes it comfortable to wear – the floating wire ends don’t rub because there’s a layer of soft mesh between them and your skin.

All of the strapping details except the neck one are fully adjustable so you can get your perfect fit. There is one defect at the neckline – the decorative strap has been placed off-centre. I’m not sure it’s as apparent in my photo above as it is to me in the mirror, but the distance from this strap to the edge of the mesh is a full centimetre longer on one side so the strap doesn’t hit the neck right in the middle.

That aside though, the set is well put-together with neat, secure seams. The knickers don’t have a gusset and have some raised seams in that area, but due to the loose style, they don’t really touch the body anyway – I haven’t found them uncomfortable to wear. 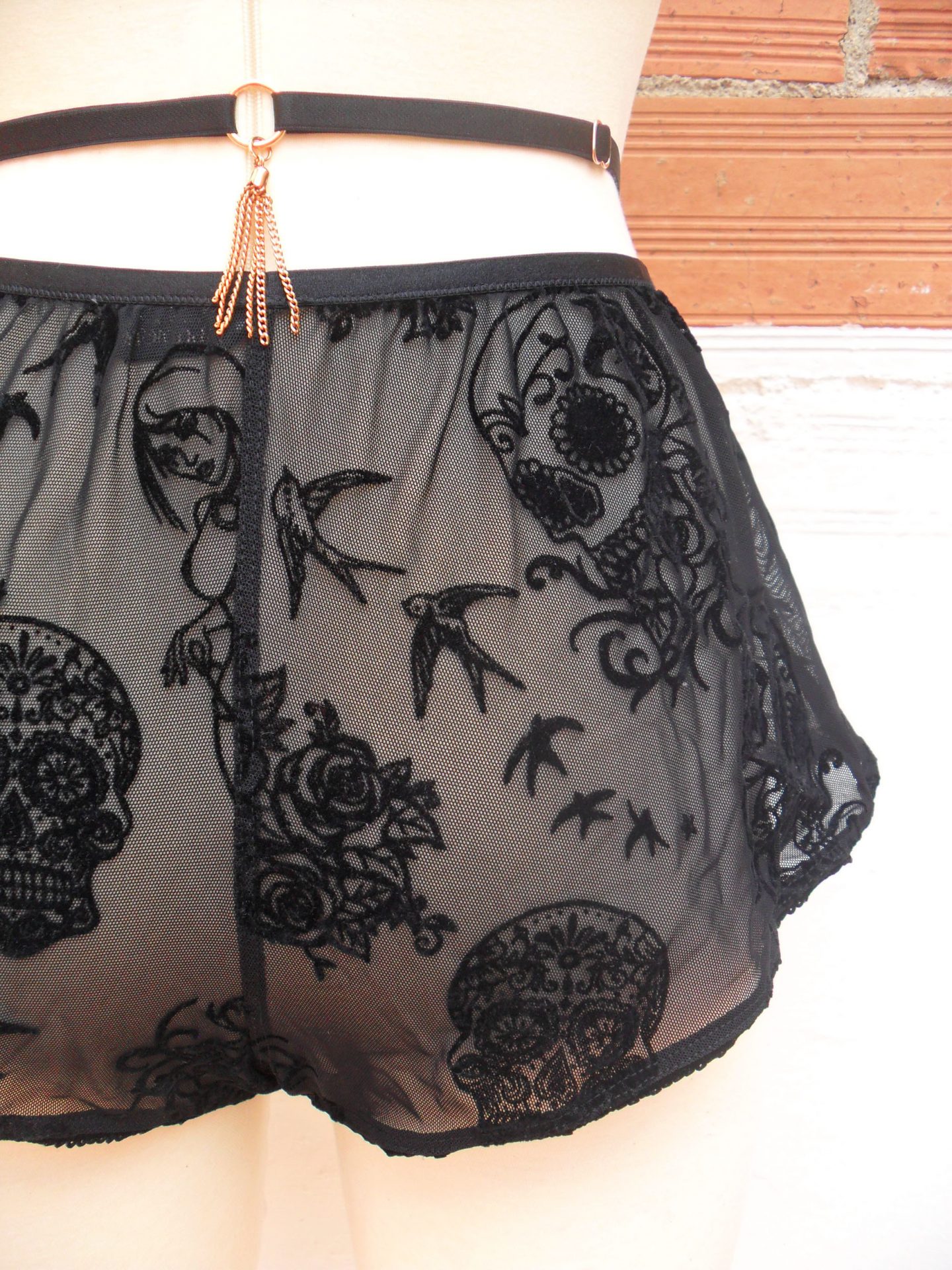 I was pleasantly surprised to see that this bra is sold by actual bra sizes – it seems like the kind of design that would come in S/M/L. I received a French 85D (UK 32D) which is my usual size right now when a 30DD is not available. The fit is excellent, partly because the band and underwires are just the right size (yay for non-S/M/L sizing!) and partly because the strapping is so adjustable.

I do wish though that the neck strap were also adjustable, as the mesh wrinkles on me and pulling it up at the neckline smooths that out. And note that this bra isn’t designed for support! With the underwires it feels a little sturdier than a bralette would, but the soft mesh doesn’t offer any lift.

The French knickers I received in an XS, equivalent to a UK 8. I am a UK 6, but again the waist strap here is so adjustable that it really doesn’t matter. I do have a shorter torso than the model, so they come up higher – on me, the ring sits right over my belly button – and I think it makes my body look even shorter, but hey that’s just me! I’ve never found this particular cut of knicker flattering on myself, but these ones are pretty so I wear them anyway. 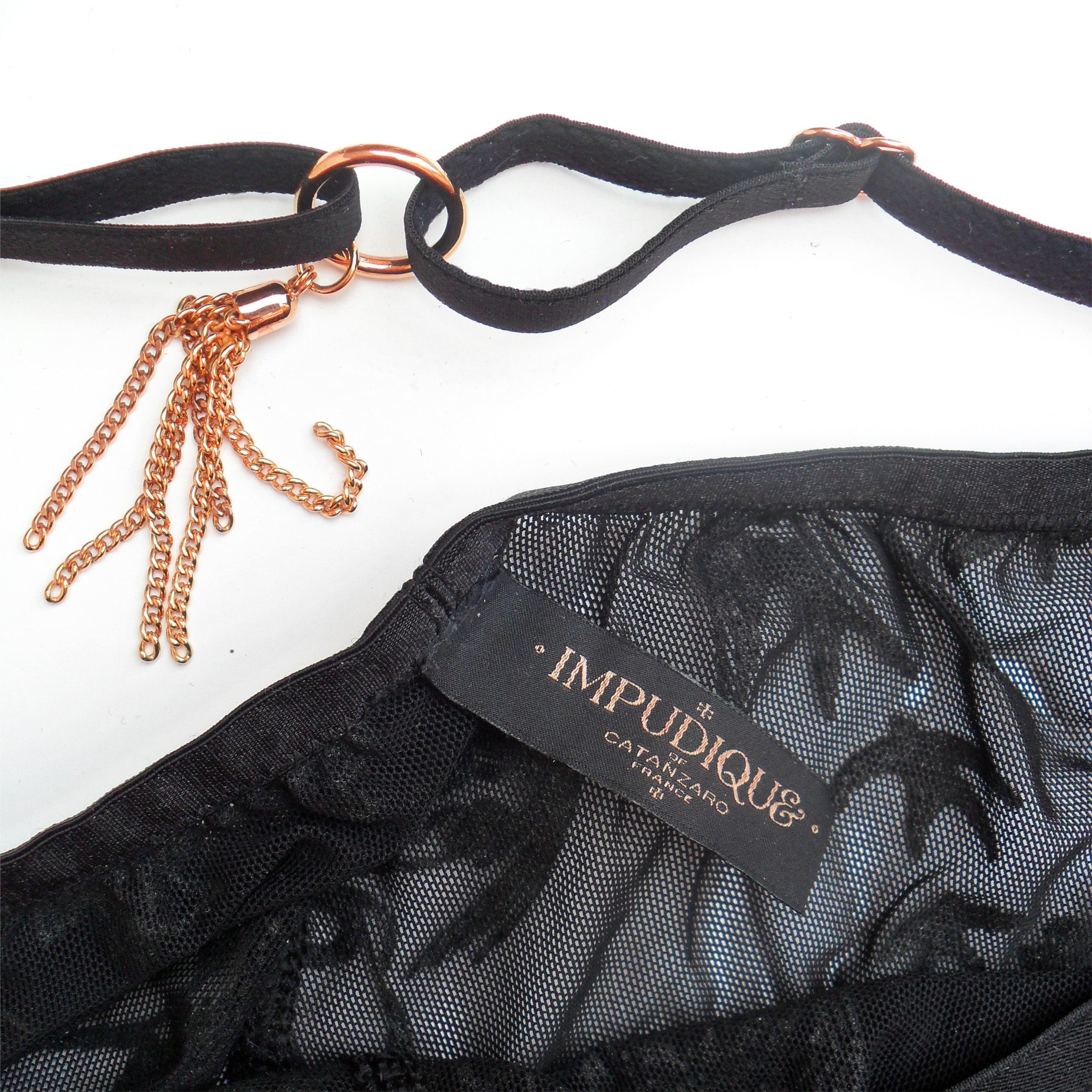 I’ve had this set for over 3 months now and lost count of the number of times I’ve worn it – it really is one of my favourites right now! Yet so far, I swear it could pass for brand new. Even the labels haven’t deteriorated (they’re fancy woven ones).

I have been hand-washing the set, as I always do, but according to the care instructions you can machine wash it if that’s your preferred method of lingerie care. The only thing that worries me is the velvet flocking, I don’t know how well that would hold up to machine washing. 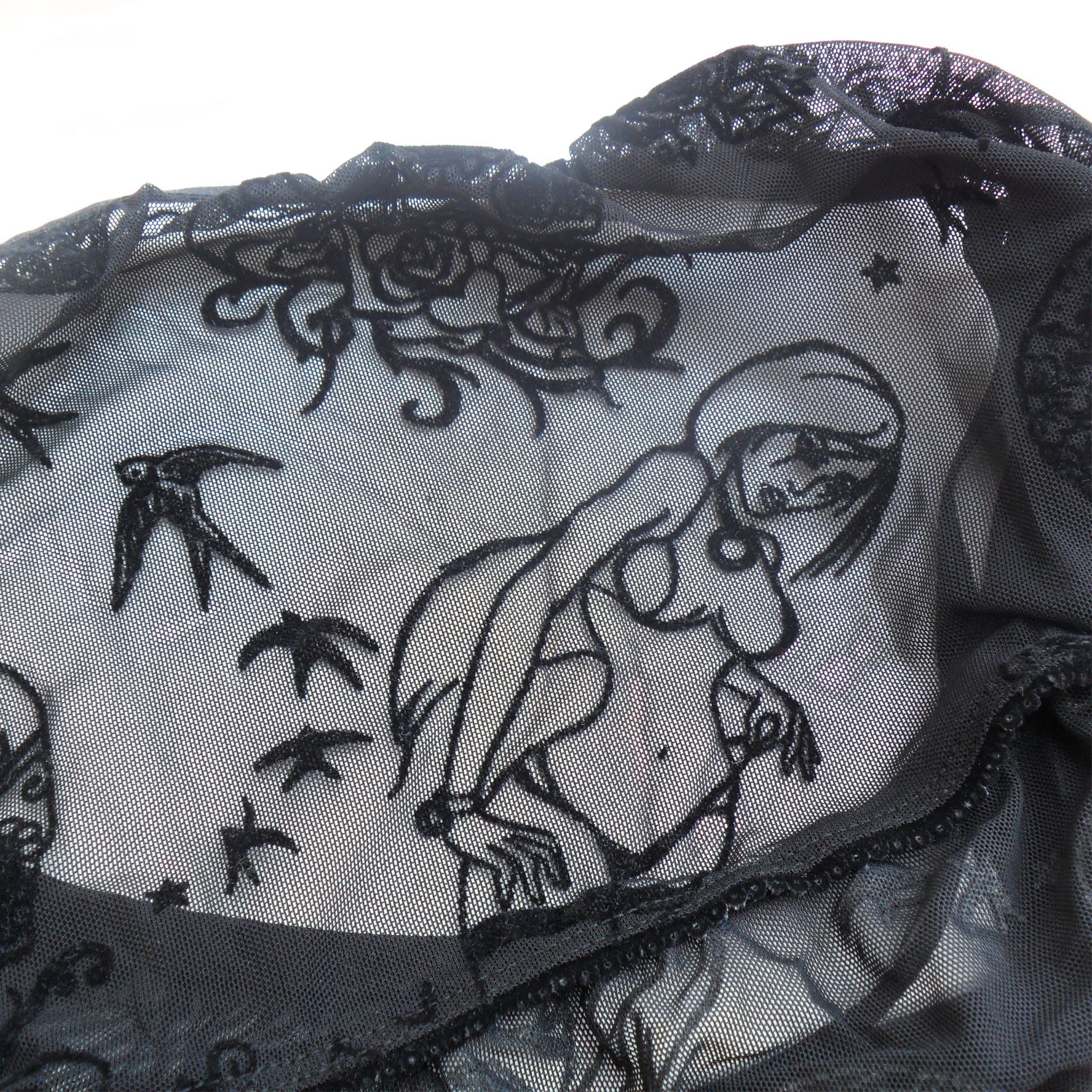 However, I still really do love this set and I would happily buy something else by this brand. Strappy black lingerie is everywhere and yet there’s something in this brand’s aesthetic that makes it stand out. Impudique reminds me of Bordelle in a way, but at a slightly more accessible price point.

I’d love to treat myself to some more Impudique, and one of the pieces I have my eye on is the cupless Elena bra. I’m also a fan of the Hannah bra – check it out if you love the knickers and want a matching piece with the same fabric.

I’d love to know what you think of this Impudique set, and the rest of their debut collection! What’s your favourite piece?

I’m Charlotte Catanzaro, I am delighted to read such an article on my creations and I appreciate your honesty.
I will take into account your remarks for the future and pay particular attention to the little details you are talking about which distress you.
To answer to your question, my favorite set is Mia Bra and his high waist Panties.
You can see all my collection Audacieuse to my website : http://www.impudiquebycatanzaro.com
Audaciously
Charlotte

Hey Charlotte, thanks for stopping by! Glad you appreciate the review. It’s a shame about the neckline on this bra but I still think the set is lovely, I’ll have to pick up your Elena bra or Lara dress at some point too 🙂