It’s hard to be an American with a lingerie addiction. I’ve often lamented with other lingeristas how the limited number of lingerie storefronts in America means we face the perils of online shopping more often than not. So when I found out I’d be living in Paris for six months, I was elated not just to try the pain au chocolate and brush up on my French, but also to shop in one of the lingerie capitals of the world. Cheap wine, great food, and lingerie – what more could a girl ask for?

I knew I was about to discover a whole new world of lingerie, and what I found was even better than expected. Below are three of the most striking differences between the lingerie markets in France and the United States.

Quite simply, the number of lingerie stores I saw in France far outweighs the number I see in the United States. Not just in Paris, either – even in smaller cities such as Aix en Provence and Rouen, a lingerie shop is always just around the corner, often in the form of chain stores like Intimissimi and Oysho.

In my experience, even America’s biggest cities such as New York and Chicago don’t stack up to Paris in the number of lingerie shops they have. Sure, you can find something at H&M or a department store, and you can discover small boutiques if you really seek them out. But if you’re looking for a store that’s exclusively focussed on lingerie that doesn’t cost a fortune, Victoria’s Secret nearly has the market cornered. Because there are so many more lingerie chain stores in Europe, you’ll definitely find more lingerie storefronts there. 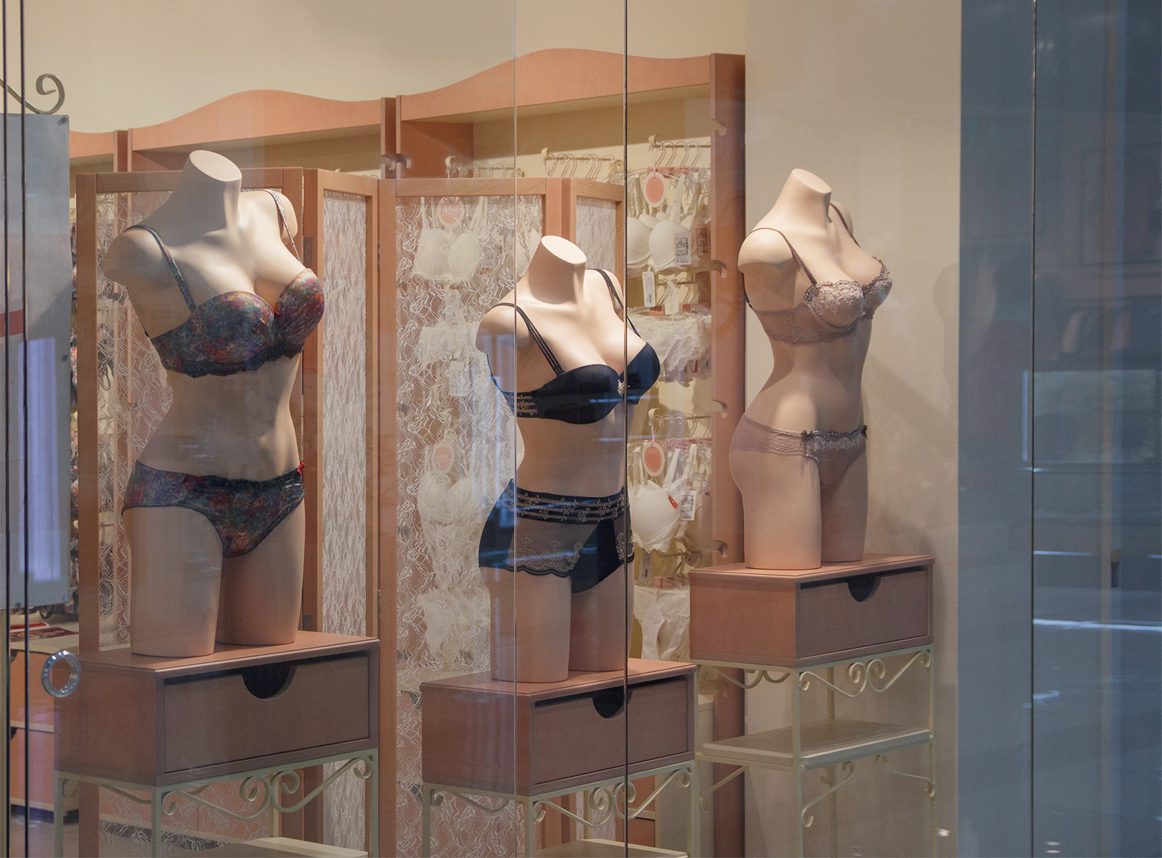 The most significant difference I noticed in French lingerie stores was the diversity of sizes. In the U.S., I can sometimes find one bra, maybe two on a lucky day, in my size of 32E / 32DDD. Oftentimes I can’t find any at all, with most stores (in my experience, especially small boutiques) only stocking up to a D cup.

In France, I quickly realised that this wouldn’t be the case. I consistently found sizing up to F cups, sometimes even G or H, cup sizes which may as well be imaginary in the U.S. for all the attention we give them. And I didn’t need to search high and low through the stacks either – non-core sizes were right there, behind the core ones! It seems France has come to terms with the fact that breasts do, frequently enough, go beyond a D and even a DD cup.

I was also pleased to notice that not only were these sizes available, but larger bra sizes weren’t built the same as smaller ones. Stores like Etam would make a bra in nearly the same style for an A and an F cup, but the DD+ ones would have thicker bands and more coverage to provide greater support. Being a size 32E (85F in French sizes) no longer felt like an anomaly which most stores couldn’t account for.

Of course, this isn’t a hard-and-fast rule: stores such as Princess Tam Tam, a favourite of the young French women at my university, didn’t have much in the way of DD+ sizing. I also want to note that while there were more bra sizes represented in France, there weren’t as many sizes available for underwear and other lingerie. Generally, I only saw XS-L underwear, and since European sizes are considered a size smaller than American ones (a U.S. size Medium would be a European size Large, etc.), it’s fair to say that plus-sized lingerie is lacking in most stores. 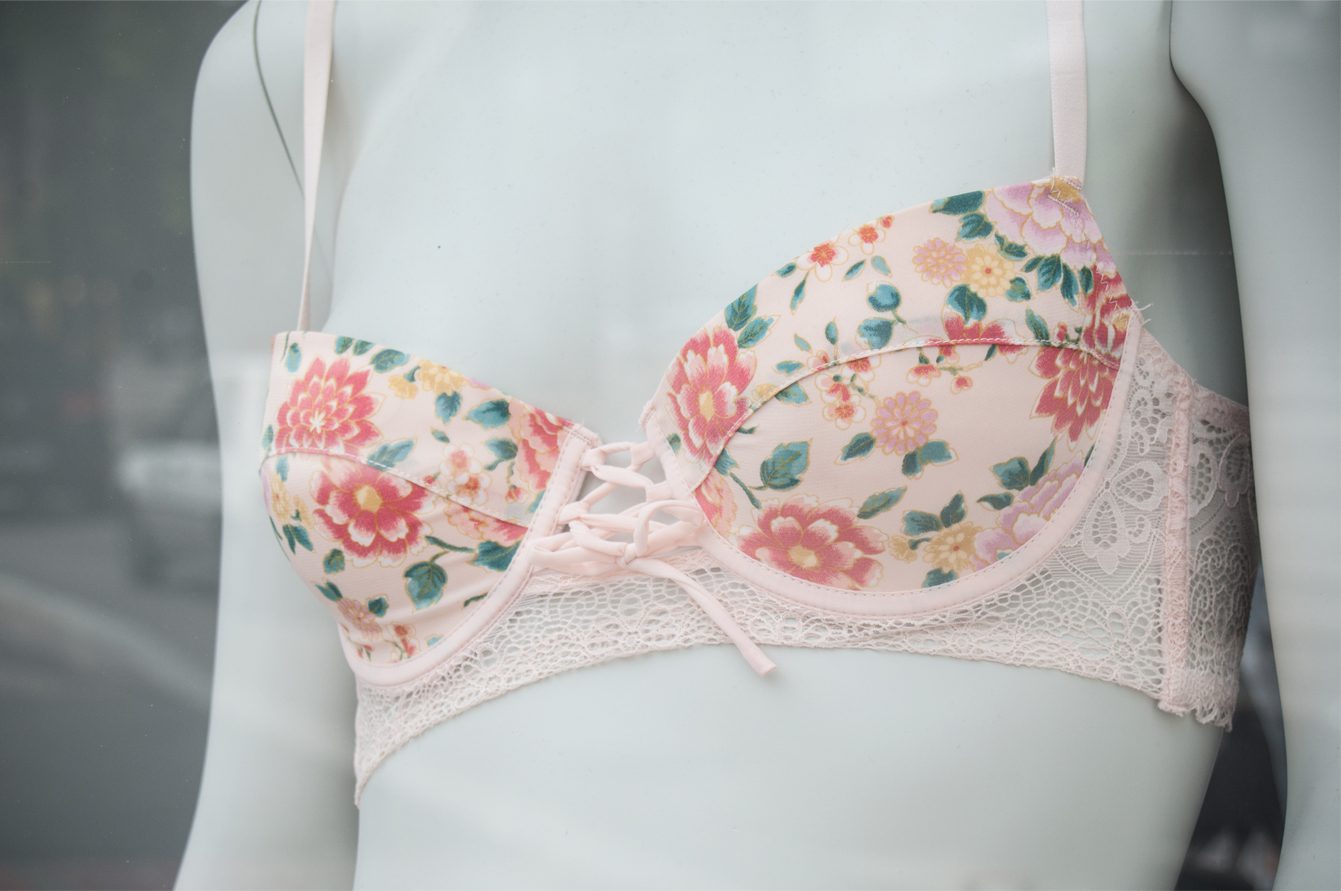 It’s no secret that Americans dress more casually than the French. Fashion is a big part of French culture, particularly in Paris. While I was there, I lived with three generations of French women, and if there’s one thing I learned, it’s that French women take the old adage ‘you can never be overdressed’ quite seriously. What might not be as obvious is that this rule applies even to the clothing you can’t see.

In Paris, I found a multitude of affordable bras that were simple and stylish. Often, they were molded bras in lace, perhaps with a bow or another small, unobtrusive detail. True to French style, they were subtly sexy.

Sure, you could find flashy bras anywhere. You could find bras that were completely plain. But the majority of the designs I saw were a middle ground, something comfortable and simple enough to wear every day but that you would also want to wear on date night.

Meanwhile, on the other side of the Atlantic, informal fashion prevails. Americans’ casual approach to clothing extends to lingerie. Very few Americans I know care about lingerie outside of a purely sexual context; even my friends who dress to the nines don’t consider lingerie part of an outfit in the same way that French women do. In America, underwear is about practicality far more than it is about fashion. Of course, that isn’t a problem – but it would be nice for American women to have the choices French women do, in terms of sizing and style.

All in all, I was continually pleased by the French lingerie selection. Along with croissants aux amandes and walking along the Seine, I miss being able to pop into a lingerie store and find something cute in my size in a matter of minutes. American fashion retailers could take a cue from the French on this one.

[…] although I am getting a similar ‘simple, casual’ sort of vibe which I associate with American lingerie brands. That’s not necessarily a bad thing, if simple and casual is what’s most popular over […]