How much uplift does a quarter cup bra really give you? What’s more supportive, a triangle-cupped bralette or a bandeau? And what difference do seams really make on a bra? Welcome to my bra style guide, which will hopefully answer all of these questions for you!

Before I start, I want to point out that this is not at all an exhaustive list of bra styles, and the ones I have covered are somewhat generalised – things like padded triangle bras exist for example, and different strap styles or band widths can all affect the support the bra gives.

Kiss Me Deadly has done a great post showing what bralettes, quarter cup bras and cupless bras look like on the same person, which I recommend you check out if you’re interested in those styles, but this guide is more about what shapes bras will give you under clothing. 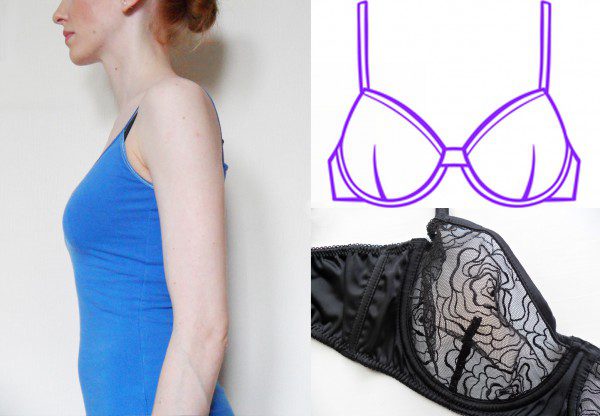 When the seams only come part-way up the cup on a bra (typically one seam at the centre-bottom), they’re more for shaping than for any kind of support. The bra cup is made from a single piece of fabric and this seam allows the bottom of the cup to be deeper.

Depending on where exactly the seam ends, this style of bra can have quite a rounded shape or a more pointed one. It will provide lightweight support and lift, but nothing heavy-duty! 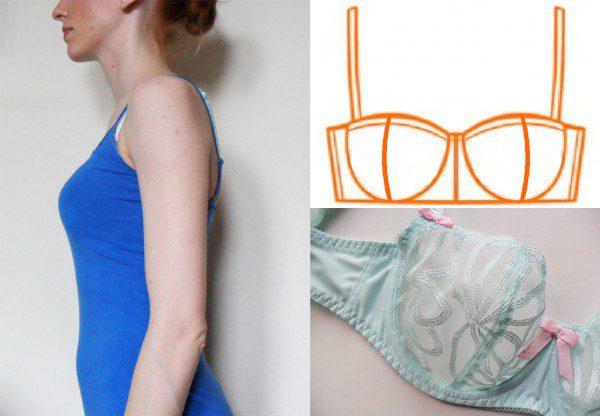 Unlike part-seamed bras, on vertically-seamed ones the seams go all the way from the base to the top of the cup – there may be just one central seam or a few of them. The cups are made from 2 or more pieces of fabric which are folded or overlaid where they join at the seam, and this strip of thicker fabric is stronger than the single-layer fabric around it.

That makes vertically-seamed bras very supportive, particularly if they have multiple vertical seams. The straight up-and-down seams are also very uplifting as you can see if you compare this photo to the one above. 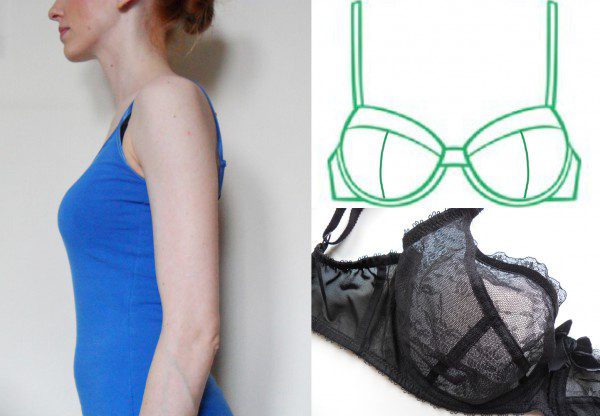 As the name suggests, this cup style is made from 3 pieces of fabric – two at the bottom and one at the top. The bottom section has a vertical seam which provides support and uplift.

However, there is also a horizontal or diagonal seam that goes across the breast. The more horizontal that this seam is, the more rounded a shape the bra will have. A three-part cup offers a lot of support but slightly less uplift than a purely vertically-seamed one. 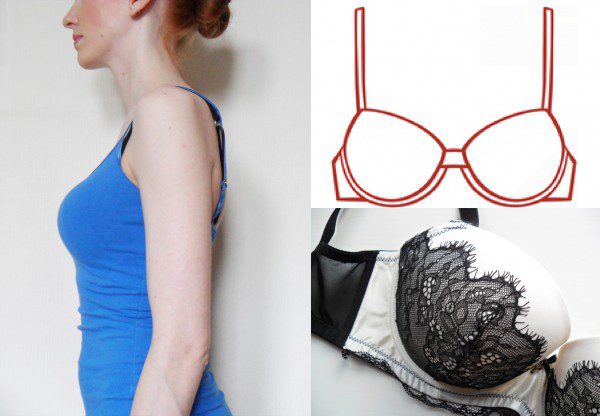 A moulded-cup bra (or contour-cupped bra) has a layer of pre-shaped padding sandwiched between the front and back layers of the cup, usually some sort of foam. It’s a very structured bra, as you can see when it holds its rounded shape when not worn!

If you want a very smooth, rounded shape, moulded cup bras are the style for you! None of the other bras on this list give quite the same shape. However, because the cup is pre-shaped rather than moulding to your own breast shape, you are more likely to have fit issues than with many other bra styles. 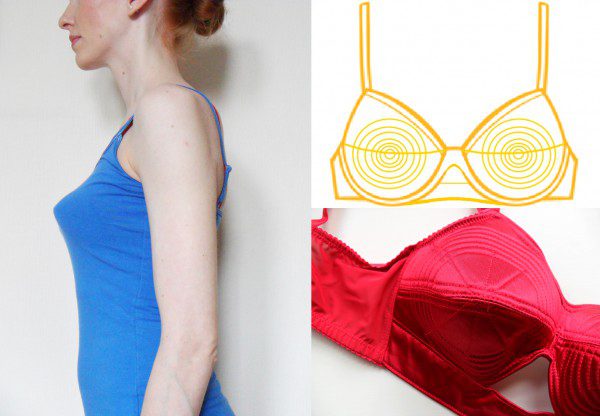 A bullet bra usually has ‘whirlpool’ round seams that go all around the top and bottom of the breast and gradually get smaller, coming to a point. The bra may also have straight seams all around the cup that converge in the centre, adding to the pointy-ness. Because this point is so unlike a natural breast shape, it’s likely that you won’t fill it out completely, in which case you can buy special bullet-bra pads to prevent the tips of the cups from collapsing.

You can also get bras that only have the straight seams, often with a horizontal seam, which have a rounder shape and slightly less exaggerated point. I believe these are called cone bras but don’t quote me on that! (Any vintage lingerie experts want to clarify?)

Although a bullet bra will always look pointed, it’s much less exaggerated if you’re wearing something looser than this stretchy top. 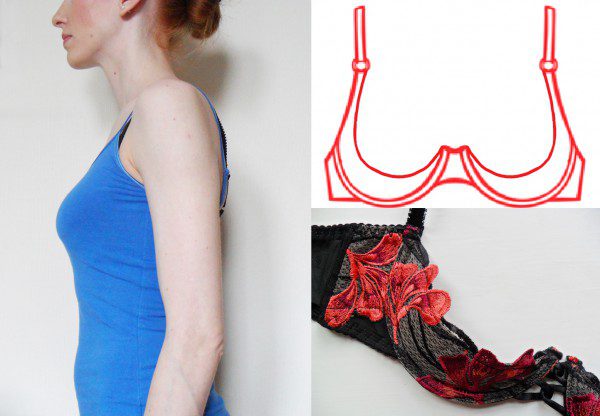 A 1/4 cup bra is exactly that – a bra with only about a quarter of the fabric of a full-coverage bra. The fabric stops below the nipple, and may or may not be moulded.

You might think that a bra like this couldn’t possibly be supportive, but as the picture above shows it actually gives more uplift than the triangle and bandeau styles below. In fact, this quarter-cupped bra gave a more projected shape than the part-seamed bra at the top of the list!

This is because the majority of the support in a bra comes from the band and the underwires. Adding a sling of fabric to that (rather than a cupless bra, which has no cup fabric whatsoever) means there is still something there to physically support the weight of your breasts and lift them up. 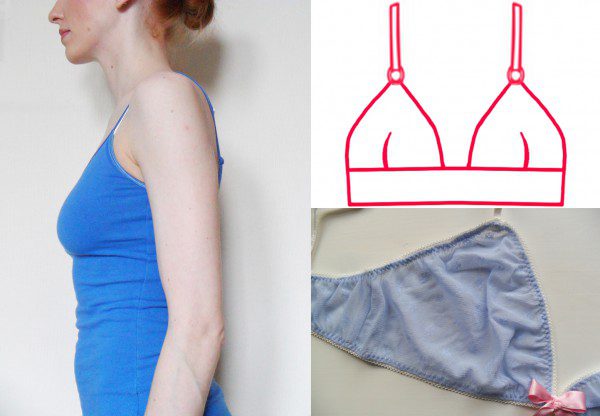 A triangle-shaped bralette has no underwires. Typically, the cups will have a part-seam to allow for a deeper shape, though the bra in this example is seamless. With minimal structure to it, this bra style offers next to no lift.

As I just mentioned, a lot of the support in a bra comes from the band, so look for a triangle-cupped bra that has a wide, firm band if you want more support.

This particular one has a very narrow band and is the closest thing I’ve found to a natural, bra-free shape.

A bandeau is, essentially, a tube of fabric. It might have a fastening at the back or it may not. Many bandeaus are strapless. As with a triangle bra, you can find bandeau bras with a band of firmer material just under the bust which can help them to stay in place better. You can even find bandeau bra styles that have underwires, though the vast majority don’t.

What most separates a bandeau from the other bra styles on this list is that it doesn’t have separate cups, so rather than supporting, lifting and shaping specific areas, it just provides all-over compression. For that reason, this bra style typically gives a flatter shape than anything else. 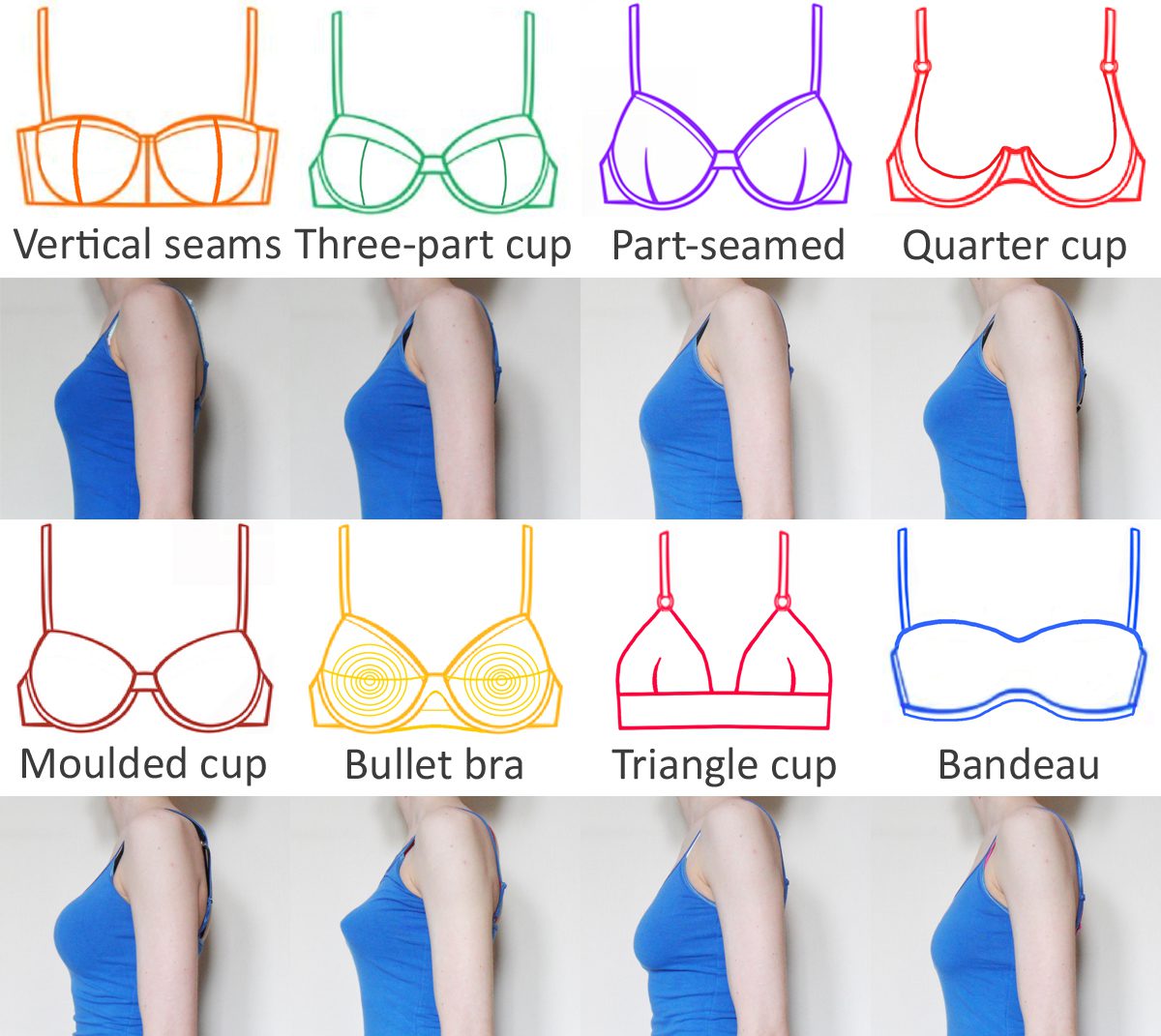 If you’re interested in trying new bra styles, or are looking for one that will give you a particular shape and level of support, I hope you’ve found this comparison useful!

Are there any other bra styles you’d like to see compared? What style do you wear most often?

An interesting article. With reference to the bullet bra the effect is unique and probably best under vintage style clothing to complete an effect. Our experience of bullet bras and cone bras is, as you suggest, that the cone bra is more rounded to the extent that the bust can seem to be “flattened” to some extent. I also understand that, certainly with regard to What Katie Did products, that the bullet bra has a rigid band whereas the cold bra comprises a stretchy material more similar to “modern style” bras.

how about the full coverage bra , the one that Calvin Klein make does it best on all shape breast , I’ve this once before , hope I could find same comfort as is regardless of its brand

Note spelling error as should read “cone bra” rather than “cold bra”.

I don’t really agree with some bits. I get a much more uplifted shape in some balconettes (3 part cups), especially bras by Cleo or Polish brands, than halfcups (vertically seamed cups), even if they’re Polish.

A lot depends on your breast shape…

Someone mentioned breast shape coming into it on Facebook too. I didn’t want to make this post any longer (it already took about 8 hours to research, photograph & write!) and I only have myself to photograph the bras on rather than a variety of breast shapes. However, a follow-up post about the styles that work best for different breast shapes sounds like an interesting piece
Old columnists have written about the topic a little already, have you read these?
https://www.estylingerie.com/blog/2013/03/31/bra-styles-for-different-breast-shapes/
https://www.estylingerie.com/blog/2013/08/04/my-journey-why-shape-influences-bra-fit/
Regarding 3-part cups specifically, as mentioned these styles are very generalised for this article. A taller bottom section and/or a more diagonal cross seam should both make the bra more uplifting. If you think about it though, a 3-part bra is essentially a vertically-seamed one on the bottom only, and then has less lift on the top half because the seams don’t continue upwards.

This is awesome! My favorite, appearance wise, and going by your photos and chart, is the triangle cup. I think it best compliments the natural shape of the breast.

Being a Trans Woman I found this article very informative.

Thanks, happy to have helped 🙂

Have you read this very recent article over at The Lingerie Addict about fitting yourself for a bra (and knickers) as a trans woman?
https://www.thelingerieaddict.com/2015/06/lingerie-shopping-for-trans-women.html

Great topic with useful information. I also read an article on how to choose the right bra type according to your body shape. [link removed]

Interesting, thank you. Could you write something about bras that don\B4t hurt at the shoulders? I don\B4t wear bras when possible, because I always get terribly tensed shoulder muscels, never found a comfortable bra.

Good topic, I will add it to my to-write list 🙂

To summarise though, bras shouldn’t hurt your shoulders when they fit correctly. I wore a bra that was a little big in the cups for me recently and compensated by shortening the straps, which made the cup lie flat but my shoulders were in AGONY by midday!

So there are 2 things to check: first, are you wearing the straps too short to make up for bad fit elsewhere? And secondly, is the band tight enough (because if it isn’t, the weight it should be supporting gets put on your shoulders instead)?

[…] flex more than others. So if going wire-free is not for you, it’s definitely worth trying out different bra styles and different brands until you find one you […]

Thanks for sharing the guide.

[…] lack of seaming on the front panel does mean that there’s no ‘forward projection’ in this bra; […]

Thanks a lot, looking forward to your article about it!

How about a photo comparison of front views? For a lot of busty women like me, the goal is to find a bra with side support to keep the bust in the torso’s frame, creating a narrower look.

Hi Paula, I agree that could be a useful post but not one for me to create I’m afraid. As a 30E I don’t really find bras pull my bust inwards because it’s already quite narrow. I don’t think you’d see much difference between the bras on me from a front view.

If anyone is reading this comment and wants to write a guest post along these lines though, you’re welcome to get in touch! 🙂