6 Reasons Your Bras Can Get Stained or Discoloured

I’ve written before about the importance of avoiding the tumble-dryer, and shared some tips on how I keep my own lingerie in great condition, so today I wanted to focus on one specific aspect of bra care – avoiding stains and discolouration.

Have you ever bought a white bra only for it to take on a grey-ish tinge within a few months, or do your shiny new bras quickly develop dirty marks that have them looking old before their time? Bras do have a finite lifespan – they won’t last as long as, say, a quality leather jacket – but with the right care even an everyday favourite can last a few years before it starts to noticeably deteriorate.

Whether replacing your bras regularly isn’t an option financially, or you simply want to keep your underthings looking as nice as possible for as long as possible (who doesn’t?), here are six things to avoid to prolong the lifespan of your bras… 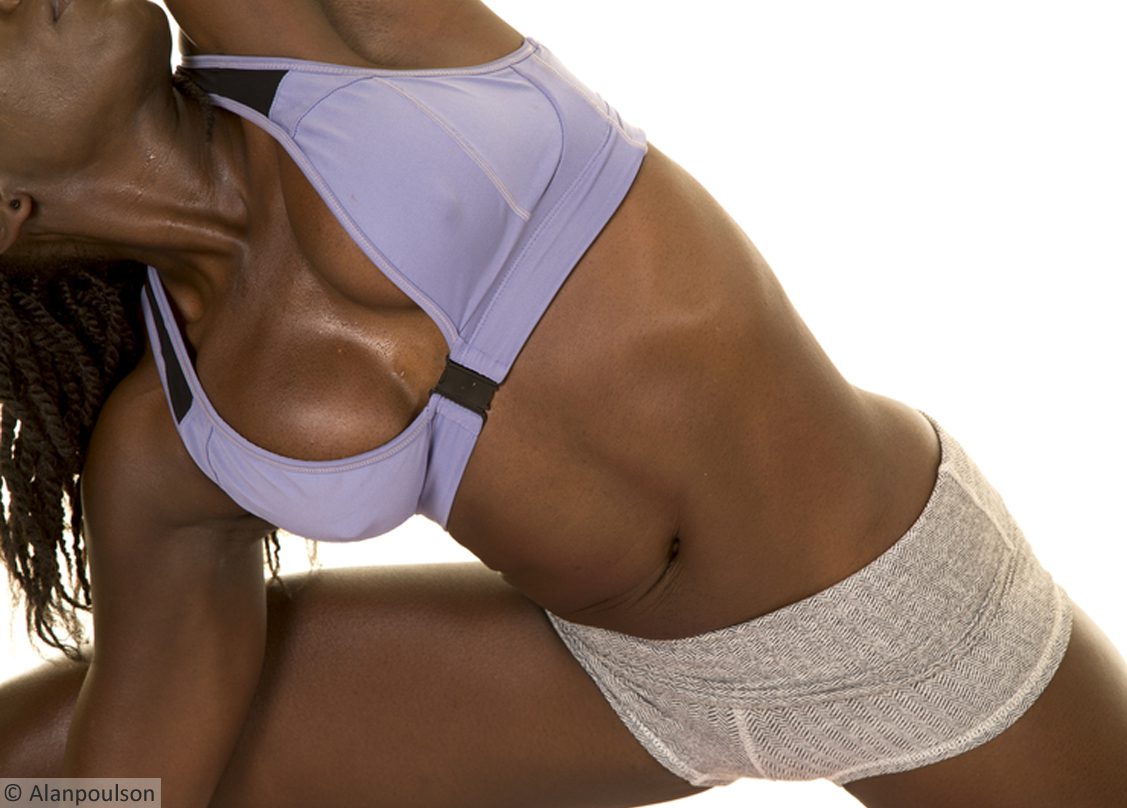 We’ve all heard of sweat stains on shirts, but did you know that it can happen to your bra too? Common areas for sweat stains to appear are at the sides where the band wraps around below the armpit, and along the underwire which sits in the crease between your breast and your torso.

Sweat itself is colourless, but when it mixes with aluminium from antiperspirants or with naturally-occurring bacteria on your skin’s surface, it can turn yellow. If you’re noticing yellowish marks on your bras, you could try switching to an aluminium-free antiperspirant. If you know your bra has sweat on it – if it’s a sports one, or it’s just a particularly hot day – soak it in cold water as soon as possible after taking it off. Hot water will ‘set’ sweat stains and make them permanent. 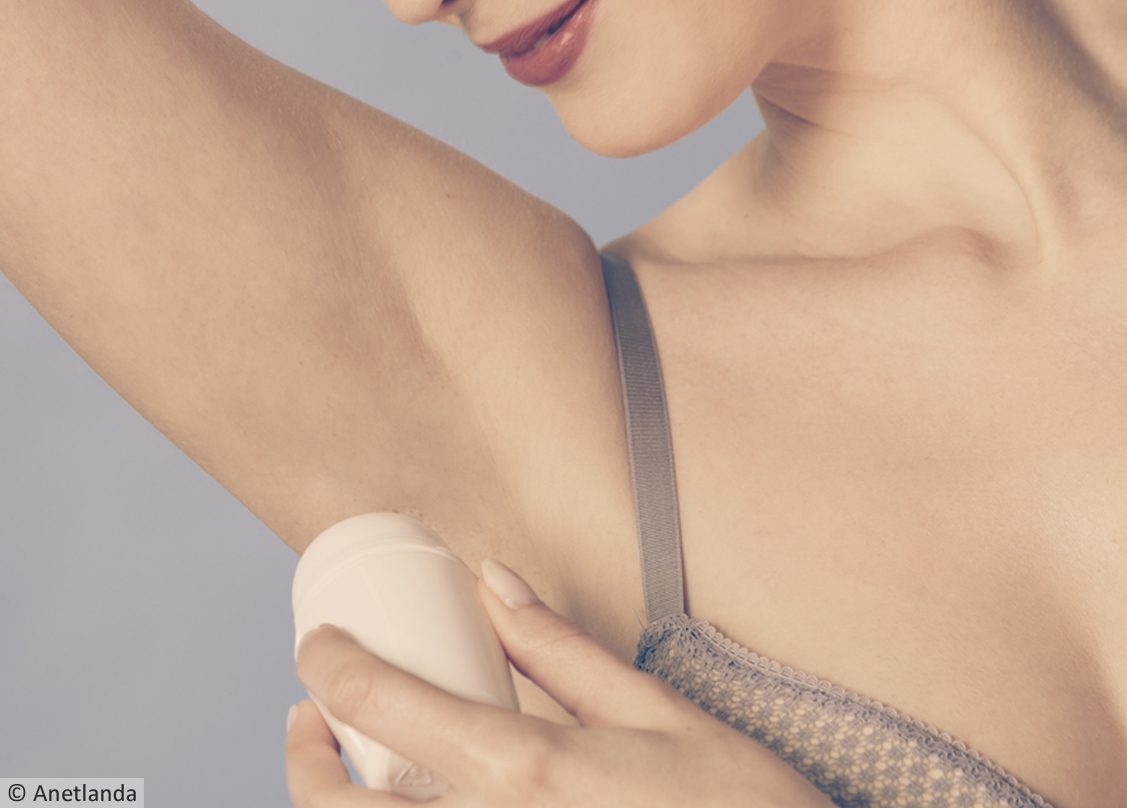 If you’re noticing white, chalky-looking stains, try switching to a clear liquid antiperspirant or deodorant. But whatever you use, always let it dry completely before you put your bra on. When washing your bras, take a little detergent and gently rub it into the inner underarm area to help dissolve and dislodge any residue build-up. 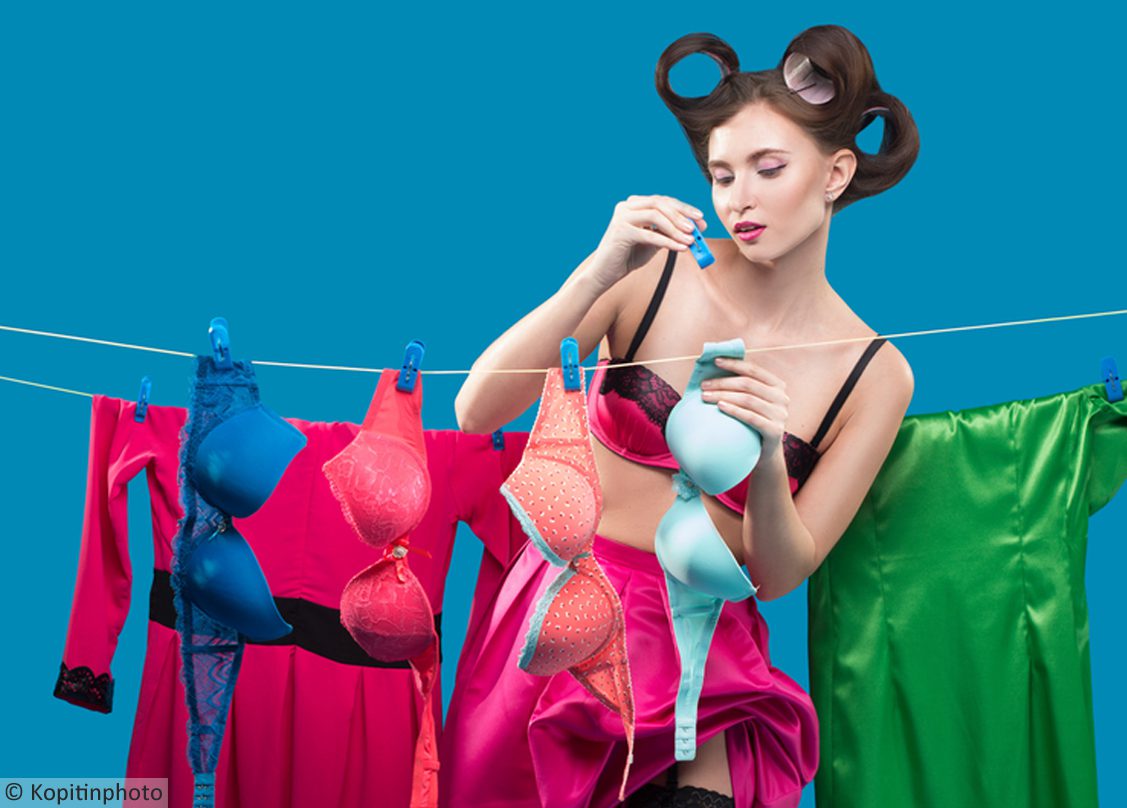 Washing With Other Colours

The waste water from your washing machine is called greywater for a reason! You’ll see this for yourself if you hand-wash your lingerie – by the time your smalls are done soaking, the water’s no longer crystal clear. Some of that is the dirt you’ve just washed out, but a lot of it is leaked dye from the fabric.

This is by far the biggest reason that bright whites tend to turn grey, and leaving a light-coloured bra to soak bundled up with a dark-coloured one can lead to spot marks where dye leaks from one to the other in the places they’re touching. Trust me, these types of stains are very tough to get out, often impossible in fact!

The best thing to do it to avoid them entirely by washing your bras by colour group – white ones only with other whites, dark blues and blacks together, and so on. Red dye is one of the worst for leaking out in the wash, so definitely do a separate wash just for your red and dark pink delicates. 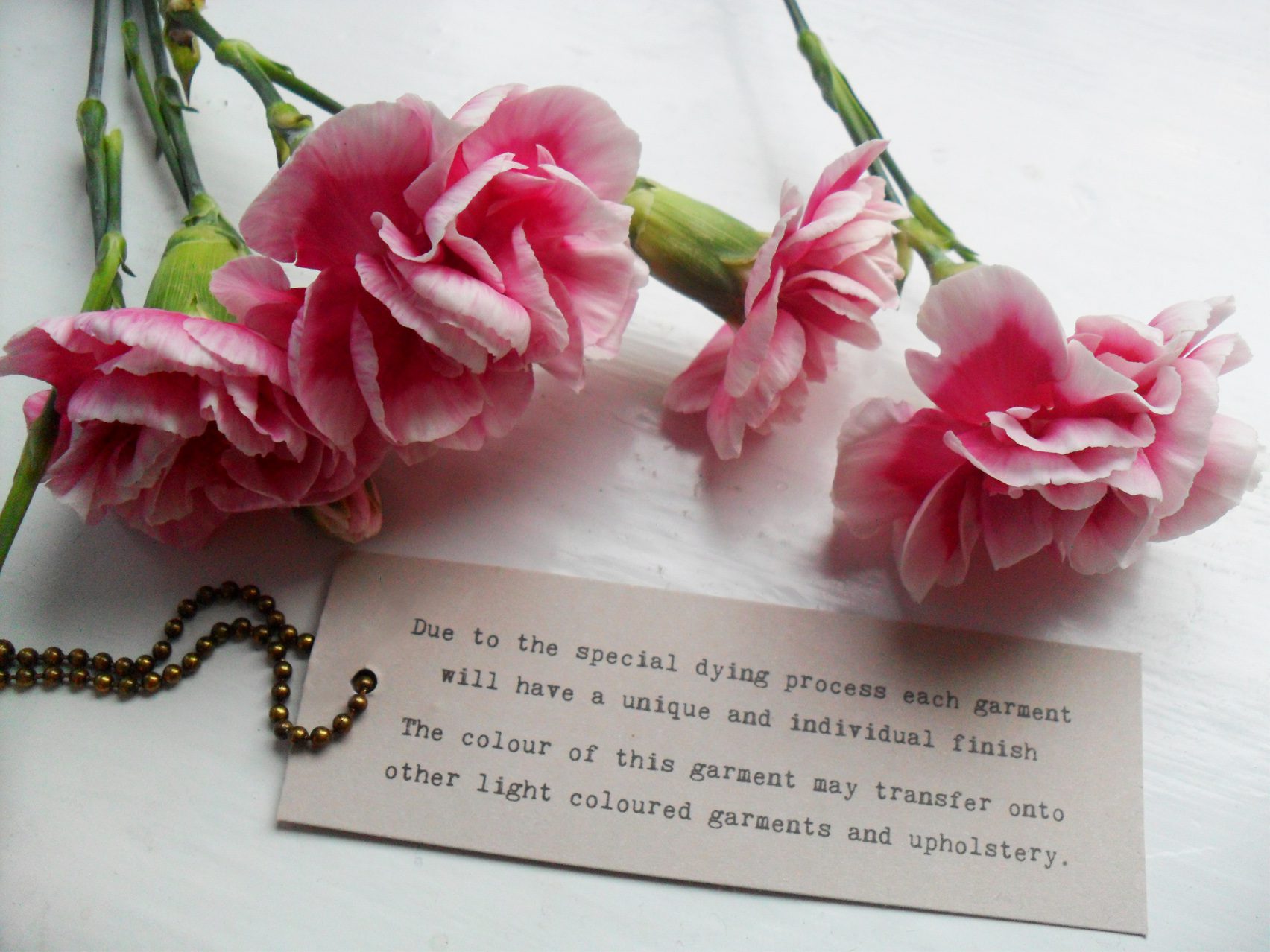 Wearing With Other Colours

It’s not just when your bras are in the wash that you need to be careful about the fabrics they touch – dye can rub off of your clothing onto the bra below too! Granted, this rarely happens, but the times you need to be the most careful are when you’re wearing something new on top of your bra. Clothing fresh from the store tends to have excess dye left in the fabric that will mostly come out with the first few times it’s washed. If you’re wearing a brand new navy dress over a cream bra, there’s a small chance the colour could transfer.

To avoid this happening, wash new clothes before you wear them to remove excess dye and other chemicals, and avoid wearing a light bra under dark clothing that’s brand new. Or pop a camisole in between to form a protective layer. 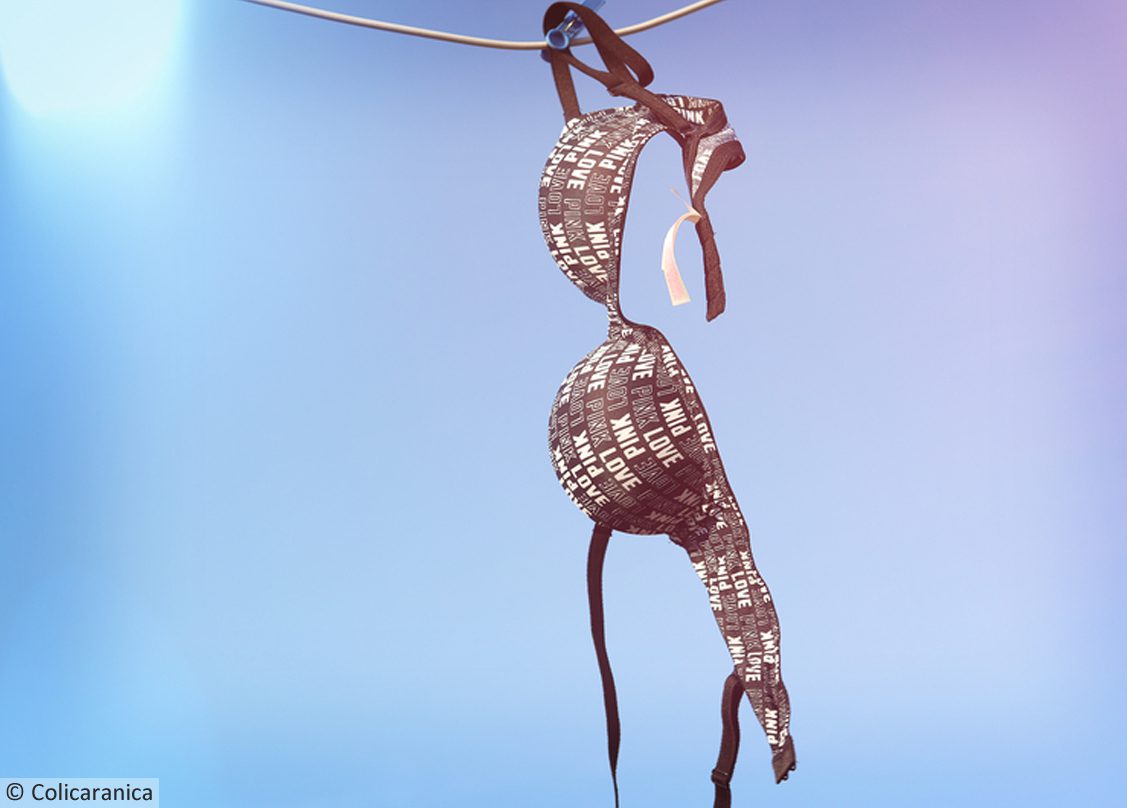 Bras should be laid flat or hung from the centre-gore to dry (ignore the picture above – the limitations of stock imagery!). If you’re drying yours outside on a washing line or rotary airer, be sure to avoid direct sunlight. Hanging your bras in the shade (or indoors) is better, because UV light will ‘bleach’ damp clothes over time, breaking down chemical bonds in the dye until the colours appear more faded.

On the other hand, direct sunlight may help to restore white bras closer to their original brightness, but do avoid leaving your bras out in the sun when it’s excessively hot – the heat can also cause damage such as making elastic lose its stretch. 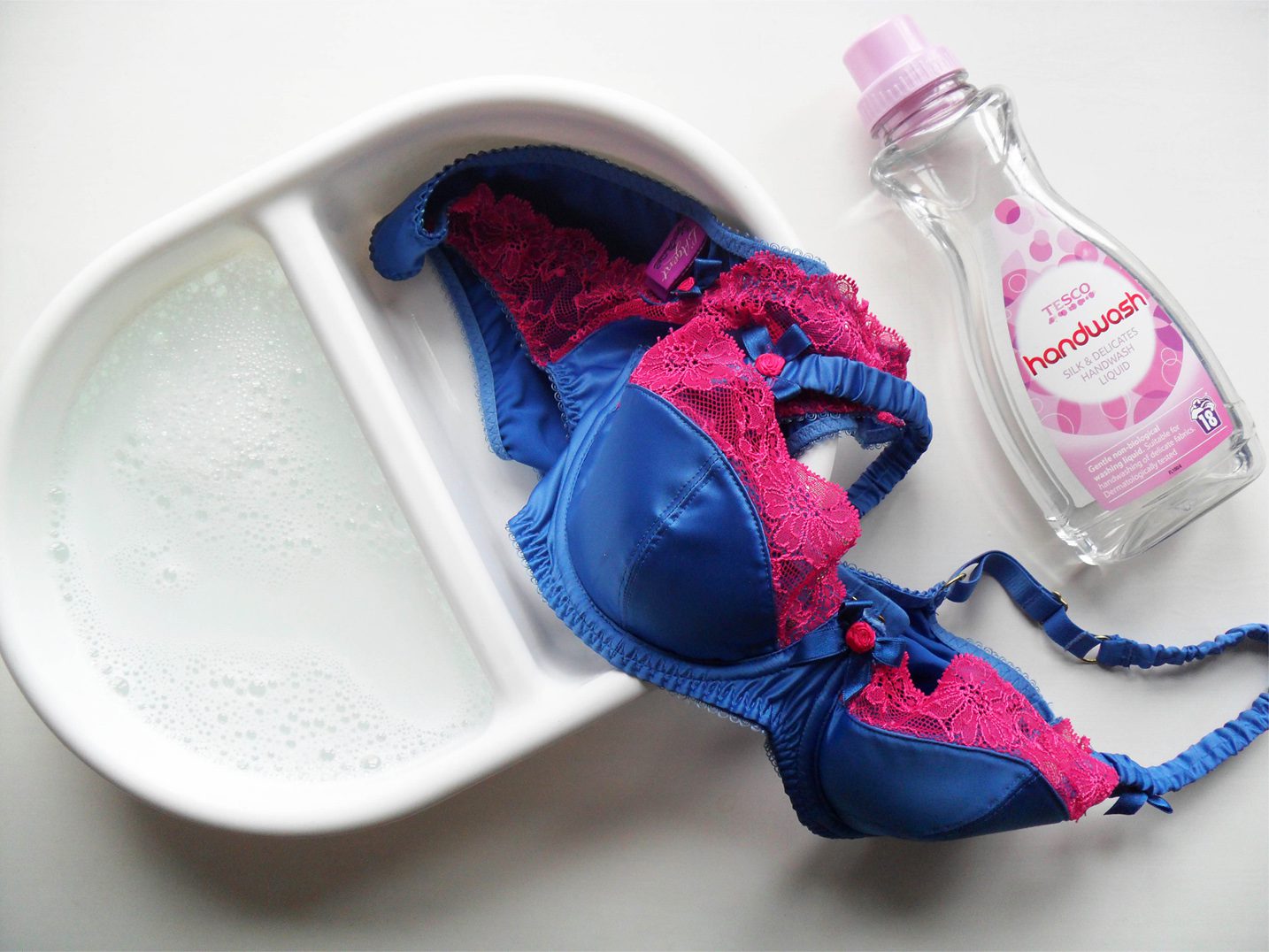 However you choose to wash and dry your bras, be sure that you do it often to get body oils and general dirt out before they have a chance to build up. As I mentioned further up, bras with sweat on them should be washed as soon as possible after being worn – ideally the same day. However for other bras, wearing them twice or even three times is okay before you pop them in the wash. Washing also gradually breaks down the fibres, so it’s a careful balance between not washing them too infrequently or too frequently.

I hope you’ve found this post useful! Would you like to read a follow-up on how to get stains out that are already there? Is there anything else about lingerie care that you’d like to know?

Soak Vs. Eucalan Lingerie Wash – Which is...

I bought this new lingerie, all white, all new; its been sitting in my drawer because I was waiting for the right time to wear it. I take it out and see that the bra padding had turned a bit stained yellow (weird because I never touched it), so I decided to bleach it. I come back to it and the whole padding turned yellow!! I’m so upset! What do I do?

Unfortunately, I’m pretty sure that bleach stains are permanent. Normally I would advise to dye the garment to cover them up, but obviously that won’t work on something that’s white. Honestly, I’d either just keep the bra as it is (discoloured padding isn’t nice, but at least it’s on the inside), or dye it a different colour and buy a new white set if I needed one that colour.

For future though, it’s worth noting that sometimes a box or even a wooden drawer that white clothing is in can cause a reaction that gradually turns it yellow. Wrapping items or lining your drawers in acid-free tissue paper can prevent this discolouration.