Why Are Bralettes so Popular?

I thought I’d kick 2016 off with a post on what turned out to be one of the biggest lingerie trends of the past year, and shows no signs of slowing down – bralettes. Just in case you’re unsure (because Ann Summers’ definition of a bralette can be rather different to mine!), I’m talking about soft, unwired, triangular-cupped bras.

Bralettes, or bralets, were once relegated to the rails of tweenage ‘first bras’, but now they’re everywhere. I think I finally realised just how popular bralettes have become last week, when I went on Ann Summers’ website and saw the new-in Ariel, Smokey Haze and Esme bralettes.

For those not familiar with Ann Summers, this is a company that has built its brand on its sexy image – a very rigid definition of sexy that is basically ‘big boobs and cleavage’. Swathes of molded cup bras sit alongside their pièce de résistance, the Boost range which claims to give you a look up to 3 cup sizes bigger thanks to “built-in, graduated padding PLUS extra air and foam filled pads“. So to see a brand like this suddenly bringing in soft, unstructured bralettes is pretty surprising. 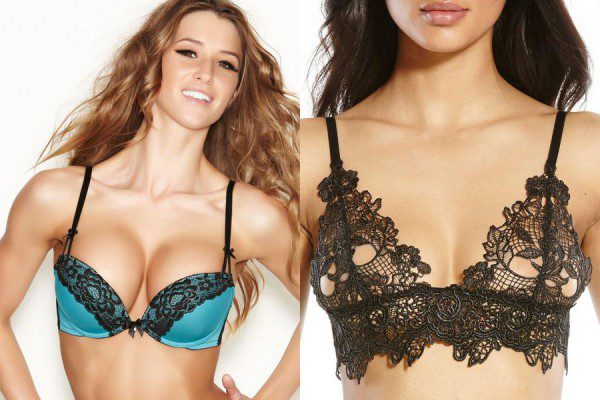 Left: Classic Ann Summers, a bra that “gives you your BIGGEST CLEAVAGE EVER” Right: One of their newer styles, “a sexy take on the soft cup trend”

So what has changed? I think a lot of it has to do with the growing popularity of buying ethically-made lingerie from independent designers. Lots of things such as the way that the internet and online shopping have exploded, the massive success of the Etsy website, and increased awareness of sweatshop working conditions have all combined to make knowing who made your lingerie, and knowing that they earned a fair wage from it, more important to more people.

And what does indie lingerie have to do with bralettes exactly? Quite simply – they are much, much easier to make than underwired bras! An underwired bra has many components and such a precise, complex fit that you can’t just learn to sew these expertly overnight.

Bralettes on the other hand have a much more forgiving fit, especially in a stretch fabric – you’ll often see them sold by Small, Medium, Large sizing rather than band and cup sizes. In their most simple form, the cup can also be constructed from a single piece of fabric, making them much quicker, much cheaper and much easier to sew – hence why the vast majority of bras you’ll find on Etsy are bralettes.

Not much more than a decade ago, if you wanted to be a lingerie designer you’d either need the technical skills to go work for someone else (a relevant degree, most likely) or the capital to launch your own brand in a world of expensive trade shows, factory-production and print advertising.

Nowadays, it seems like just about anyone can set up a brand from their sitting room, and that’s kind of the point. It just means that a lot of designer-owners are appearing who don’t have the technical know-how to make the kinds of bras we’re used to buying on the high-street, or the budget to invest in offering the much bigger size range that underwired bras ideally need to be sold in. 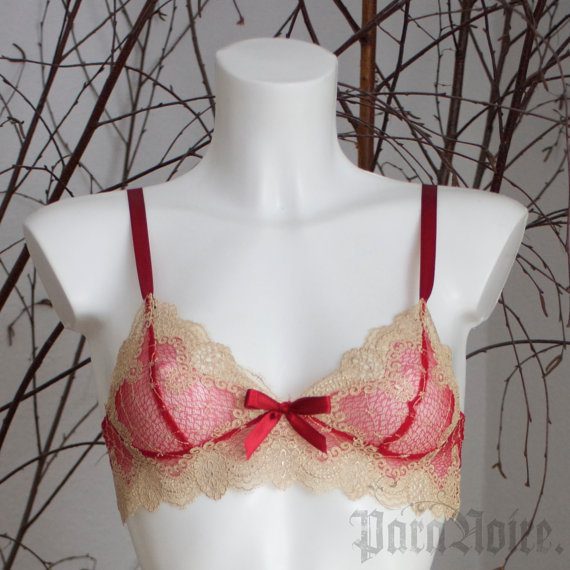 I don’t think that all of this is the only reason bralettes are becoming more popular though. After all, we don’t tend to buy something we don’t like just because it’s readily-available – especially not when it comes to fashion.

I think that the body positive movement, which started a couple of years ago, has had some impact on our growing love for bralettes. It’s not a movement focussed specifically on anything to do with breasts or lingerie – it’s about creating representation for marginalised groups, such as plus-sized or disabled people – but at its core, the message is ‘your body is perfectly fine just the way it is’. 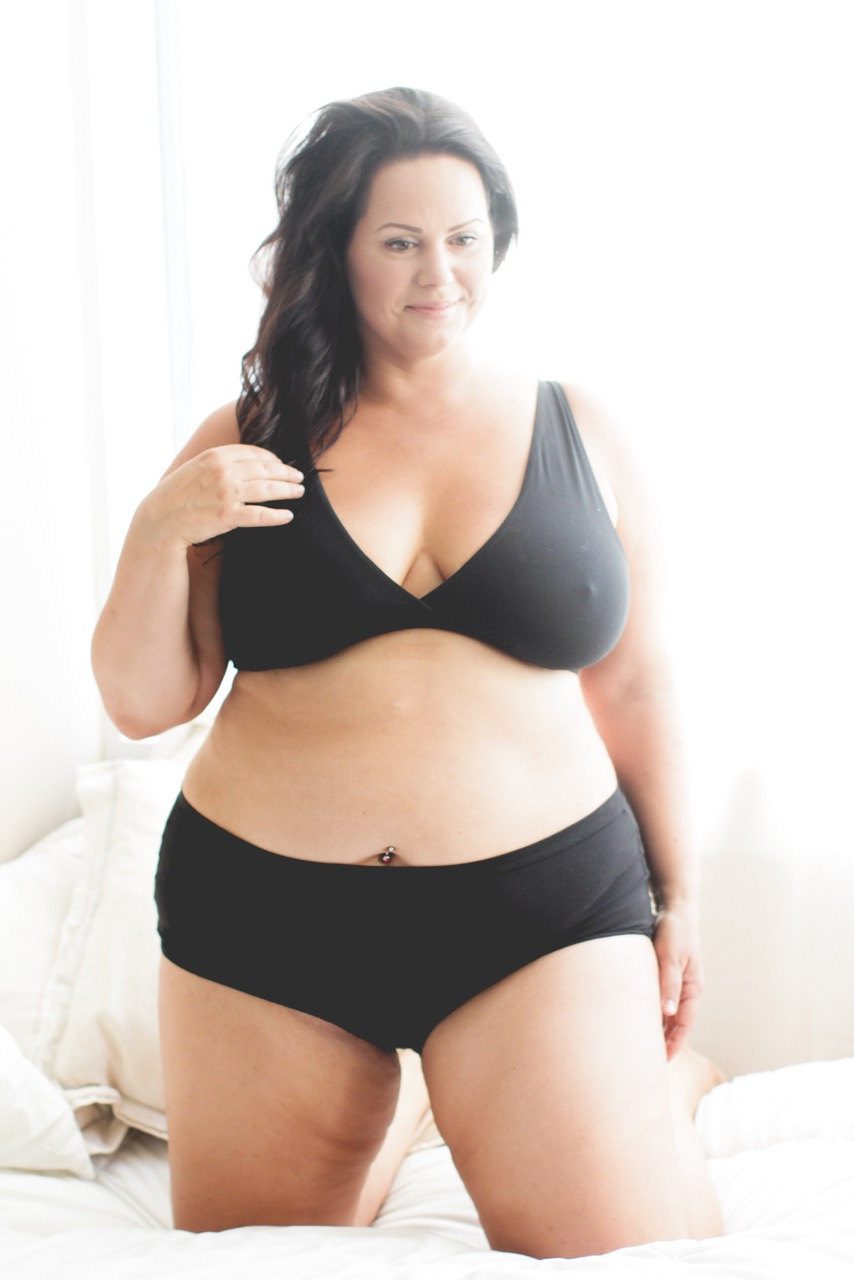 The Lyta bralette by indie brand Hannah Broer, whose editorial photo shoots include one with this plus-sized model, Nicole

And that message does have some relevance to a lingerie industry that’s intent on changing the way our bodies look. Push-up bras, padded bras, molded bras, ‘smoothing’ knickers and other shapewear… all of these are high-street lingerie staples that reinforce the idea that only a particular, smoothed-out, pushed-up body shape is attractive and desirable. This isn’t anything new – just think back to the bullet bras and girdles of the 50s or the Wonderbra of the 90s.

So as we, in general, become more comfortable with our natural shape it makes sense that we’re happier to opt for unstructured bra styles that let our chests just be, instead of squishing, pushing and padding them into a different shape. Brands like Neon Moon have arisen, which describes itself as “feminist lingerie for body positive women“. Designer Hayat says her lingerie “doesn’t pressurise anyone to look any certain way“, and the only bras you’ll find here are of the unpadded, unwired, bralette variety. 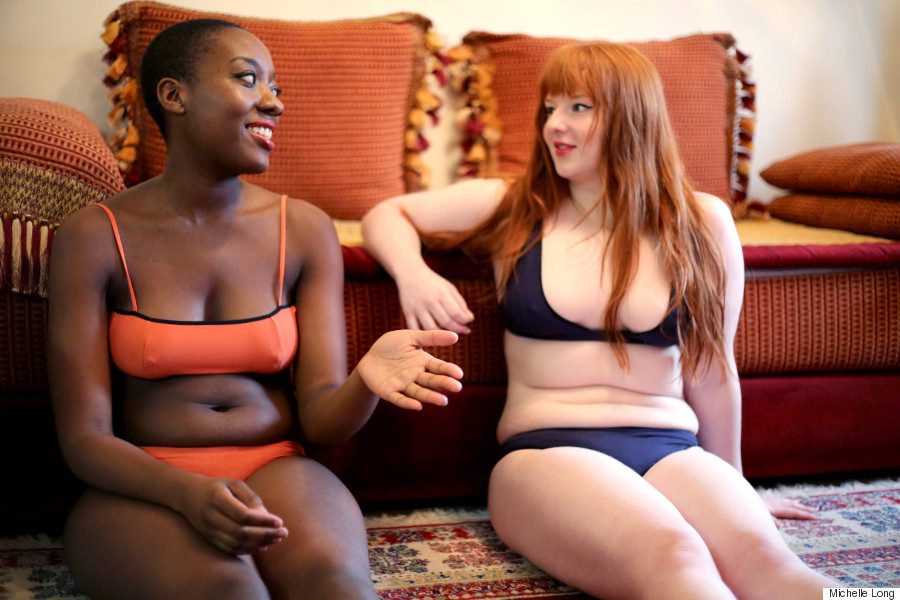 Of course, I don’t think brands like Ann Summers have any interest in selling ‘body positive’ lingerie, and it’s certainly not an independent brand – they’re just cottoning on to what they see as a fashion trend and cashing in. On the plus side though, they’re helping to boost the popularity of bralettes which may have a knock-on effect on the many indies also selling them!

Are you a fan of bralettes? Can you think of any other reasons for their sudden popularity? And what do you think of big brands like Ann Summers starting to jump on the bandwagon?

This was a really interesting read, and something which I have never really thought of. I definitely see your point and agree with what you said about being more comfortable with our natural shape without feeling the need to change that. As indeed, this is certainly how I feel about bralettes as I slowly feel less and less of a need to always look like I have nice round boobs with the use of moulded, padded bras.

Personally I’m still not a bralette fan because I like the support of underwires, but over the past 2-3 years I’ve definitely moved away from only wearing molded cups (and before that, often gel-padded ones!) to unlined bras. I’m not bothered about having that big, rounded shape anymore, and you can see the details on lace so much better when it’s sheer 🙂