10 Reasons Indie Designers are Vital to the Lingerie Community

Large lingerie companies are risk adverse – this is why you see the same tried and true silhouettes with updated colours each year. Indie companies are more likely to take risks to create products they think should be in the marketplace.

This for example is why companies like Knix, Lunapads and sheTHINX are the ones making period underwear and not Victoria’s Secret (who dominates the US lingerie market at roughly 62%). 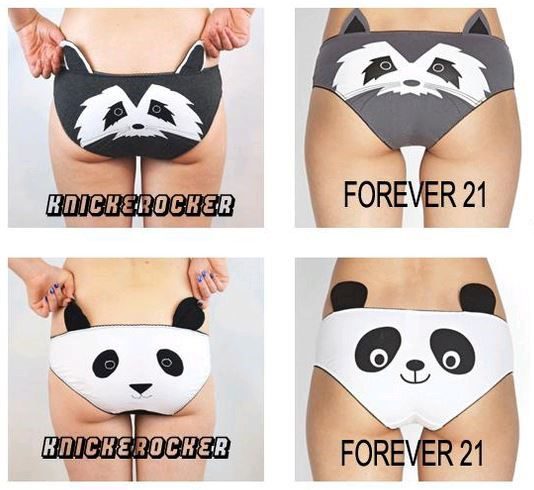 Knickerocker designs that were stolen by Forever 21

Since indie designers are more likely to innovate, they are often the catalyst for new trends in the lingerie industry; big brands jump on board and often steal designs once risk is lower – once the trend has gained ground and proven to be profitable.

Fleur of England’s appliqué bras have been mimicked by brands such as Of Love and Lemons and ASOS. Creepyyeha was one of the brands at the forefront of a strappy, goth harness trend. Other indie designers like Knickerocker have even seen their designs stolen by big companies like Forever 21.

What are the chances that your feedback to Wacoal, Victoria’s Secret, or Freya is going to result in design changes? Pretty slim unless there is a mass outcry! However, indie designers frequently make changes to their lingerie based on just a few pieces of customer feedback. Recently, Dottie’s Delights made fit changes to the Sugar Candy babydoll based on reviews by Holly at The Full Figured Chest and by Sweet Nothings. I know that Tutti Rouge too has modified their bra fit several times based on customer feedback.

While there are downsides, this ability to react and change the product based on customer feedback creates an open dialogue between customer and company. Most indie brands I know of actually care about feedback from customers and want to perfect the fit of their garments. 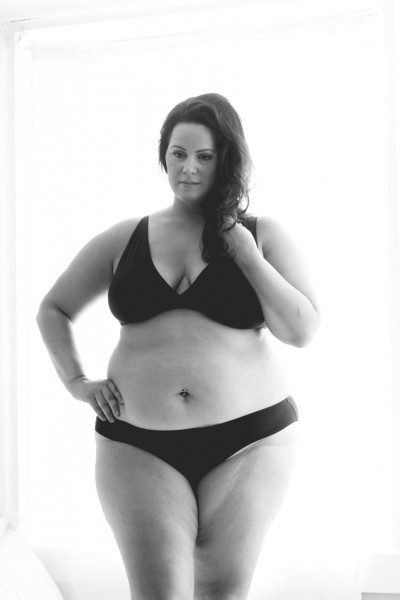 When a bralette comes in XS-XXL, it’s rare to see a brand pick a model that’s not XS-M. Would a mainstream lingerie brand do the same? Plain Lyta bralette by indie designer Hannah Broer

The larger the company, the more conservative its social policies seem to be. I like to pick on Victoria’s Secret because, despite parading around girls in lingerie, they are actually quite conservative. Their girls all fit this cookie-cutter image of the tall, thin, pretty girl next door. Indie companies are more likely to reject cis-gender, heteronormative advertising.

There exists an array of niche markets not served by mainstream lingerie brands. Mainstream companies fail these markets for a variety of reasons: they assume the niche is too small for profit; they are risk adverse and will not expand into these markets without proven demand; they are conservative and do not wish to align their brand image with those of the niche market; and other such reasons.

This is where indie brands flourish through innovation and risk-taking. Nude Barre saw a need in the dance world: there were no skin tone tights for women of colour. Thus, their company was born and boasts an array of 12 shades of nude. Corsets are no longer mainstream foundational garments, yet many indie companies including What Katie Did are still serving this niche market. The transgender niche market is now being served by a growing number of companies designing binders, including f2m Binders. 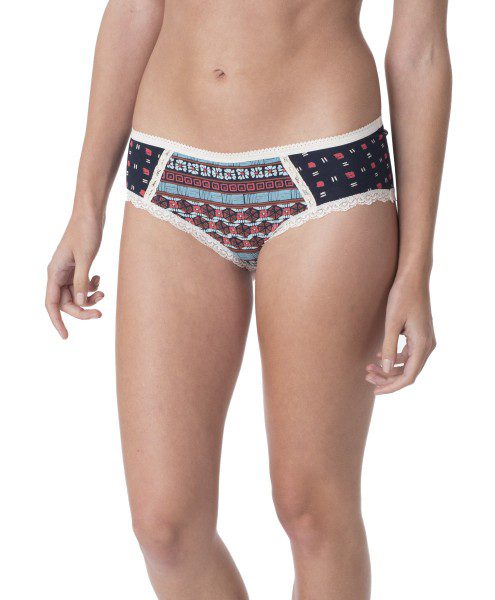 Nearly all of your mass-produced bras are made by underpaid workers in unsafe countries like China. They may be forced to work long hours, with no breaks, in terrible working conditions. This doesn’t even address the plight of other workers along the supply chain (like cotton pickers), the pesticides sprayed on crops, or the chemicals used in manufacturing.

Victoria’s Secret doesn’t care about people or the earth but many indie companies do. PACT provides lingerie basics like undershirts, underwear, and socks with:

Independent lingerie companies like PACT show us that lingerie can be produced in an ethical fashion and it can be profitable as well. 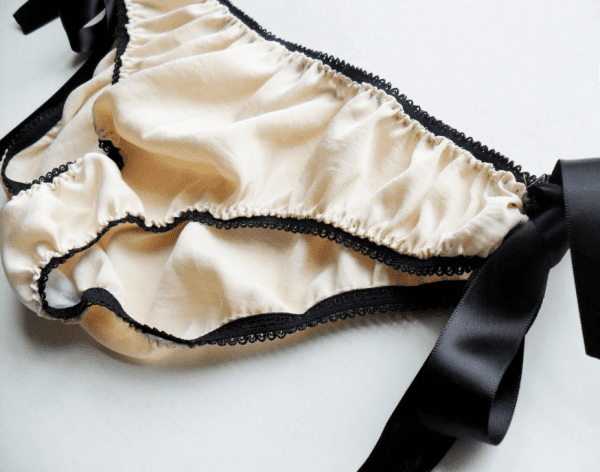 Indie designers often source end of roll fabrics and trim extras (like lace) that other large companies have left over. This excess yardage is redeemed and reused by indie designers such as Kiss Me Deadly – check out this awesome article from Rock the Curves matching Fantasie and Panache bras with Kiss Me Deadly pieces made using big-brand excess fabric.

Globalisation has resulted in manufacturing being sent to third-world countries, yet many indie designers are fighting this trend. You can ethically manufacture overseas but this is an exception, not the rule, when it comes to who makes your lingerie and how it gets made. In first-world countries, minimum wages are far closer to a living wage and there are much stricter health and safety regulations. Child and slave labour is also forbidden in countries such as Canada, the USA, and the UK.

Supporting local manufacturing is not only about ethics: it is about creating jobs and sustaining your own economy. When you manufacture within your own country, the money you put into manufacturing stays in your country. Between The Sheets and Hanky Panky are both proudly made in the USA. Nettle’s Tale and Fortnight Lingerie manufacture in Canada. Ayten Gasson and Miss Crofton make their lingerie in the UK. 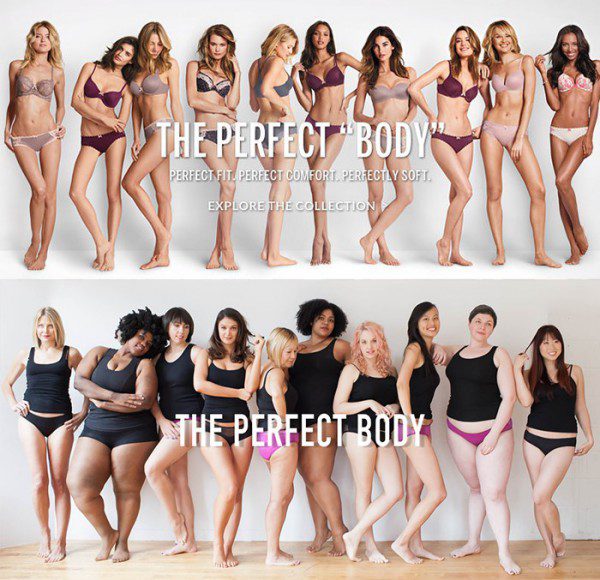 Victoria’s Secret misstepped when they released their The Perfect Body ad showing skinny, tall, mostly white women. Dear Kate’s counter lingerie ad featured women of different shapes, sizes, and ethnicities in the same style as the original ad. The message was clear: the perfect body is the one you have.

Indie brands often act as a mirror to the lingerie giants. They show not only these large companies, but also us consumers, that the status quo is not the only option. They fight back against societal norms for beauty and even point out decidedly racist, sexist, and exclusionary advertising, language, and assumptions.

Go back five years and you would be hard pressed to find nude lingerie for women of colour. Sure, you could find brown bras but they were generally modelled on white women and sold as a brown bra, not as a nude bra for darker-skinned women. Enter Nubian Skin, an indie brand that makes nude lingerie specifically for women of colour. Since then, other brands have taken notice and nude lingerie for different skin tones is gaining in popularity: just this year Naja released their own range of inclusive skin tone lingerie.

Indie designers are in a unique position to tell customers things they do not know and may not want to hear. There is a trend on social media where people with minor sewing skills berate luxury lingerie designers for their prices and then claim they could make that same piece of lingerie for a fraction of the cost.

Enter Karolina Laskowska who breaks down the cost to make one of her sets in DIY Lingerie: Can You Make It Cheaper? and Angela Friedman who wrote The Real Value of Handmade Lingerie: Part I – Direct Costs and Part II – Indirect Costs & Value on The Lingerie Addict. Both women are independent designers lifting the veil on the designing, sourcing, and manufacturing of lingerie.

Designers tell us other hard truths as well. As consumers, we wail on about how Photoshop creates unrealistic standards for women. Then indie designer Catherine from Kiss Me Deadly comes around and writes 9 ways fashion photos are unrealistic – without any photoshop at all! There are myriad topics I could bring up under the ‘hard truths’ category. Bigger bras are more expensive to make. Medium sells much better than XXL. The list goes on.

If you follow small indie designers, you will quickly learn that many designers have full-time jobs just to make ends meet because they do not make enough profit or sell enough items to make lingerie their full time job. Indie designers remind us that the majority of indie designers are not getting rich off their customers; they do it because it is a passion. It is perhaps these hard truths lifting the veil on our own ignorance that make indie designers indispensable to the lingerie community as a whole.

Why do you think indie lingerie designers are vital to the lingerie community? Add your own reasons in the comments below.

Indie designers round out the industry and give shape to what could very well be a dull underwear industry. Thanks for the post, it’s putting me on a hunt for new options for [link removed]