It’s been quite some time since Agent Provocateur has released either a campaign or collection that piqued my interest enough to write about it. All the way since 2014 in fact. But their Spring/Summer 2019 campaign*, titled Pump It Up, has really connected with me.

I won’t lie, partly I’m just biased towards liking anything that features a nod to gymnastics. That sport was a really big part of my life growing up, and I still love watching it. But it’s more than that. The video for Pump It Up just has this really fantastic energy, the kind that makes you want to dance around the house in your underwear. The choreography is great, the music is just perfect, and the lingerie is not bad either.

Lately, Agent Provocateur’s campaigns have mostly veered between feeling bland and uninspired,  ultra male gaze-y (who remembers 2017’s foot fetish photo shoot? 2018’s Valentine’s videos?), or just bizarre in terms of styling. And okay, maybe Pump It Up has a little of those last two things. But it’s also really fun. I mean, hitting up the poolside with stockings and a suspender belt over your swimsuit? Boxing and lifting weights in high heels? The absurdness is what makes it work – you know no one would wear these in real life, so it’s just simple fashion escapism. 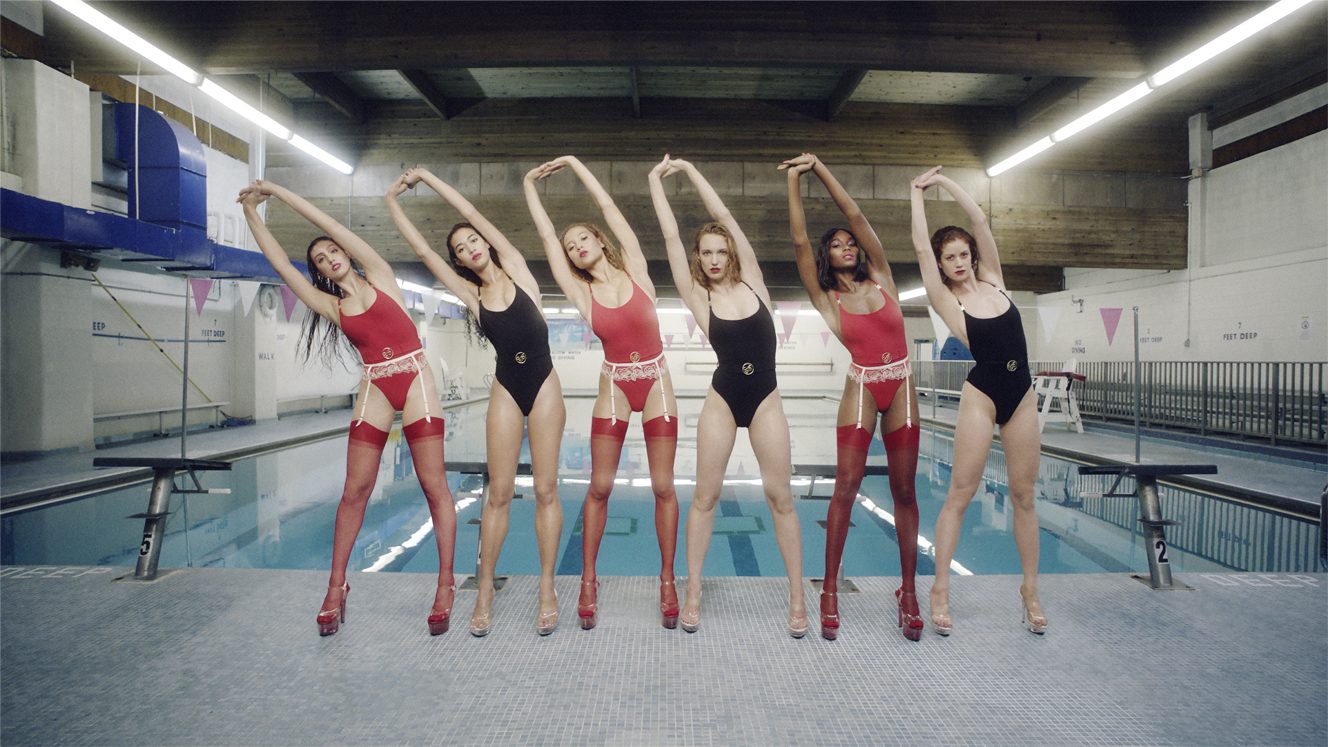 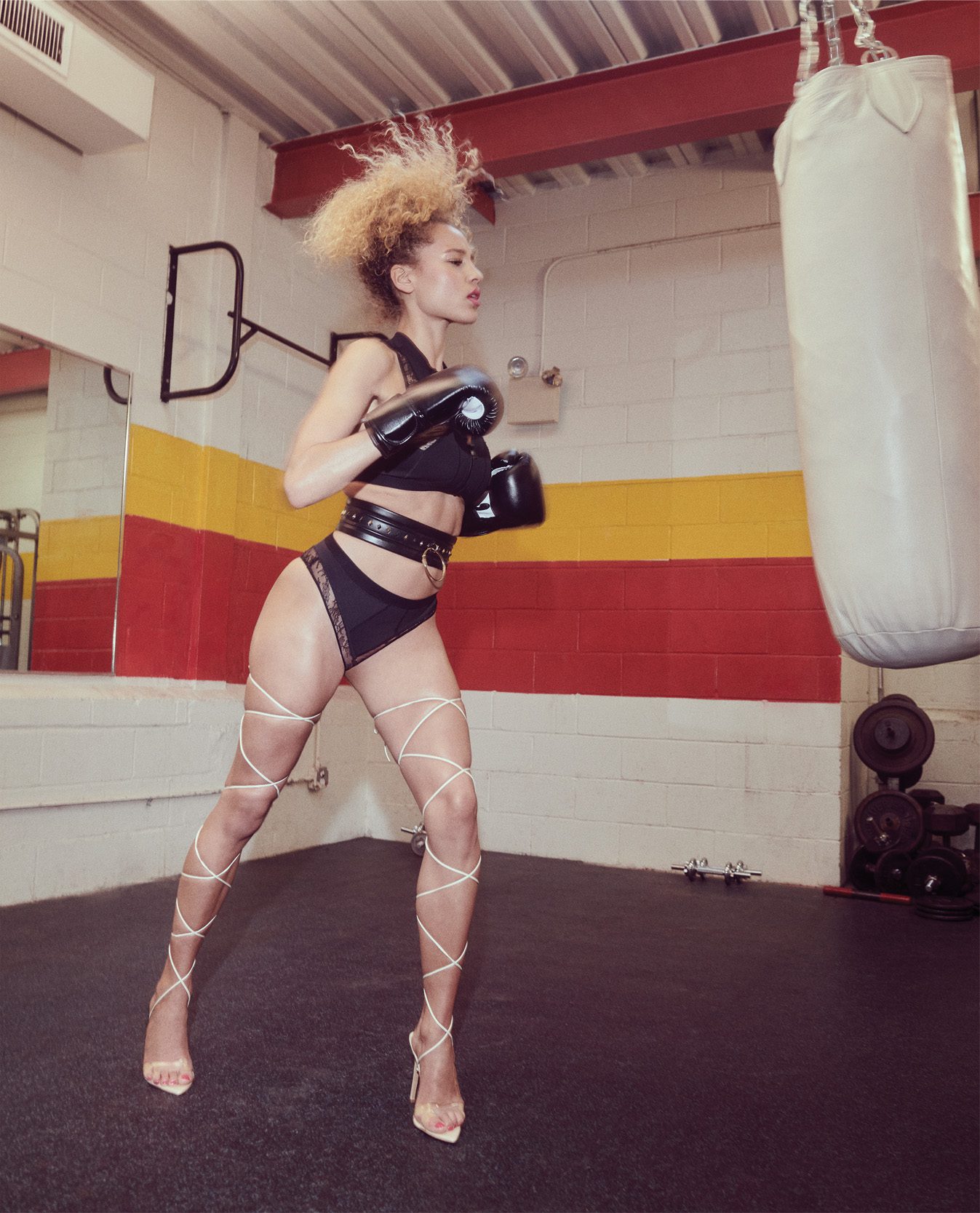 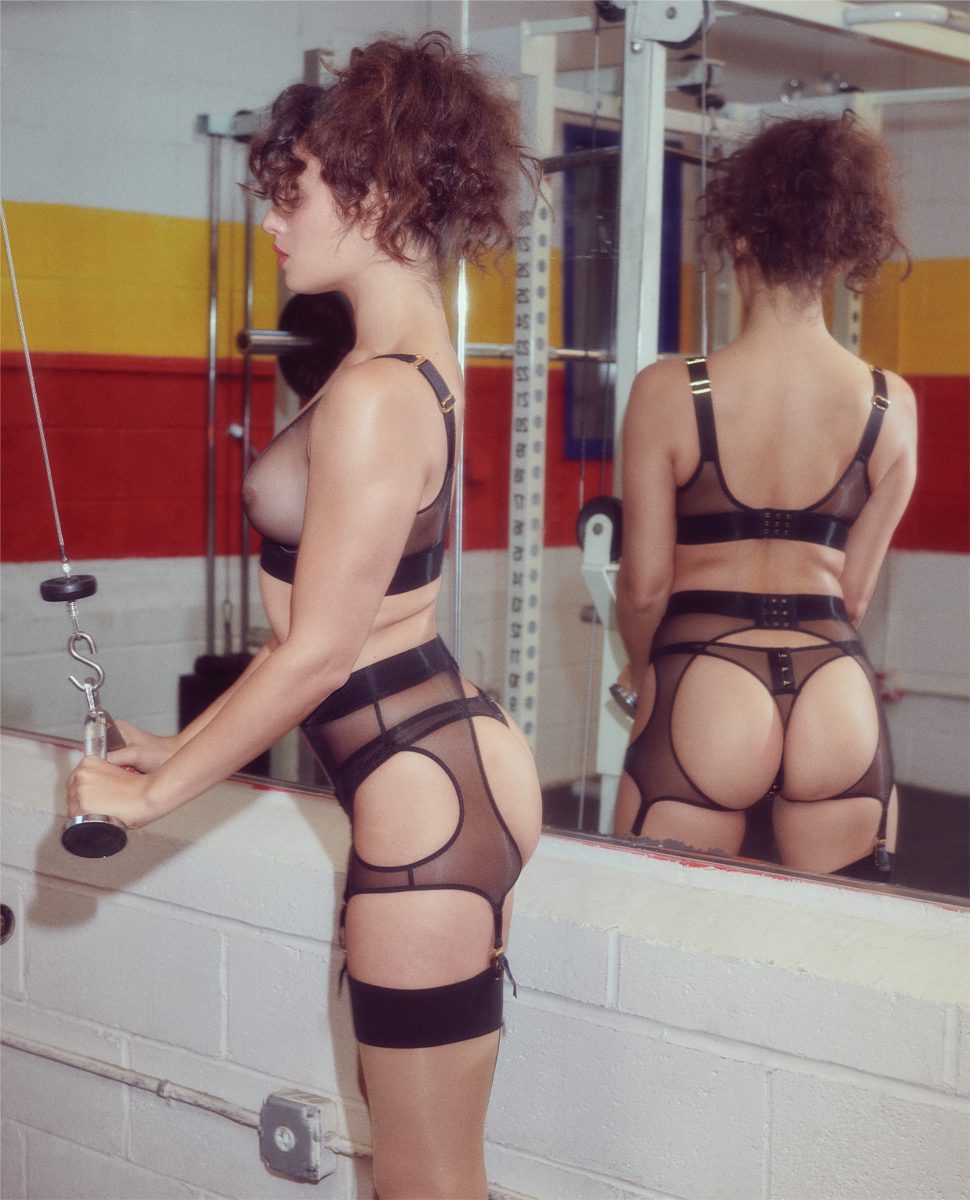 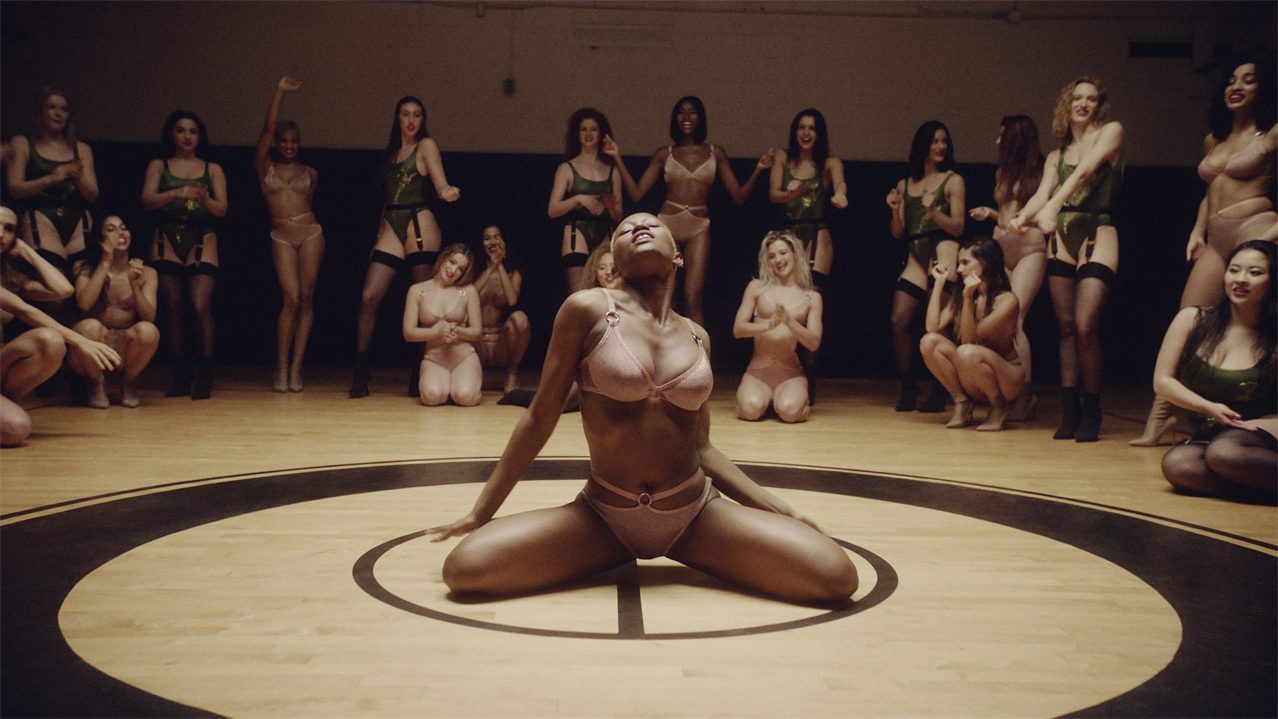 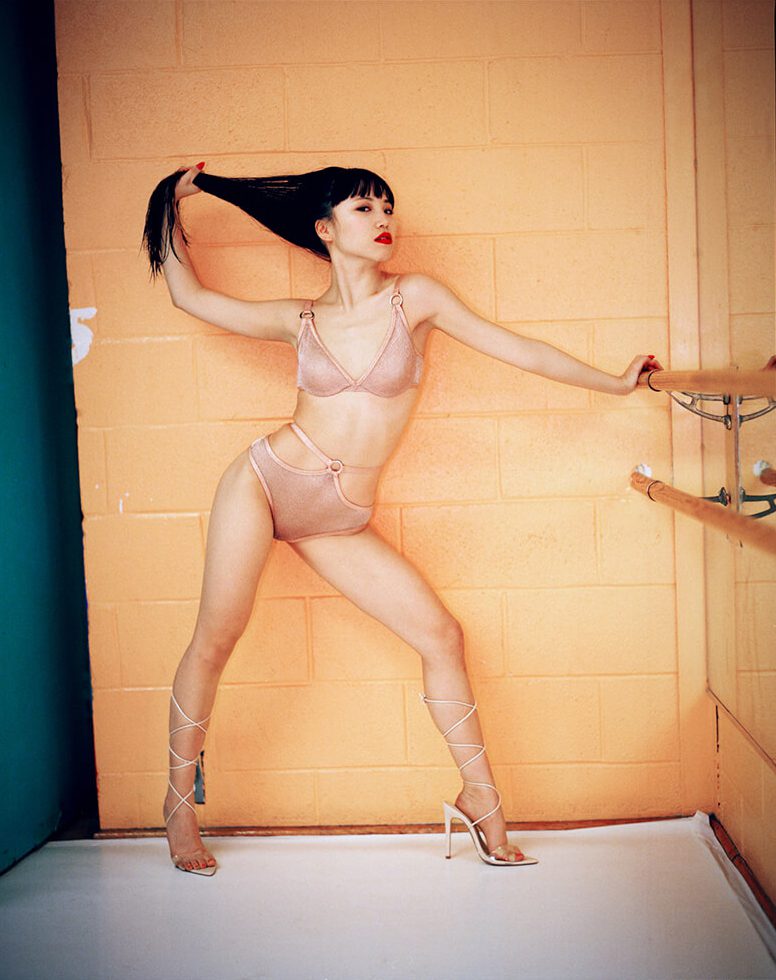 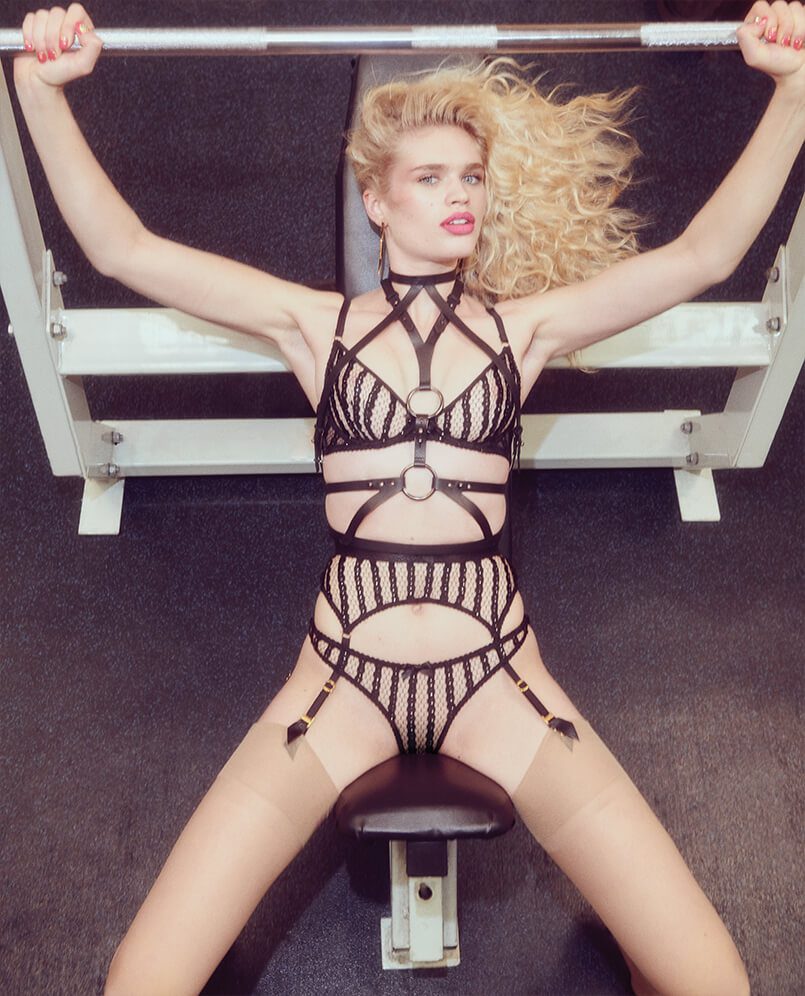 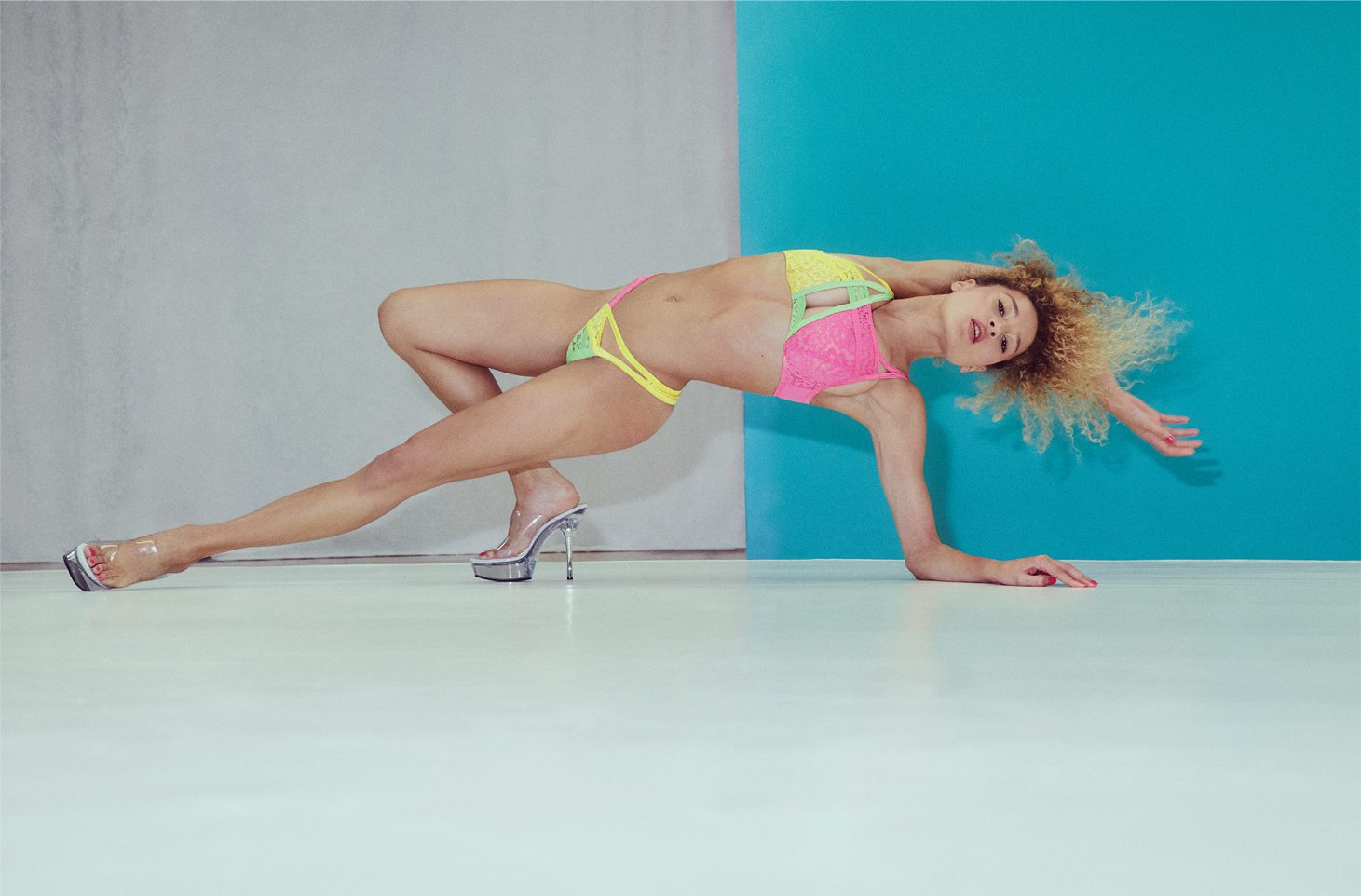 The campaign has been shot in a gym using professional dancers as models, and the garments in the campaign have apparently been picked with minimalism (to let the dancers’ moves take centre stage) and freedom of movement in mind. I can see that in the looks they’ve chosen to use in the video, like the the sheer Dora set*. And the collection as a whole has some athletic undertones.

The scuba-jersey Perry set* is clearly sportswear-inspired for example. And the Kai bodysuit* really reminds me of gymnastics leotards. But Spring/Summer 2019 includes the usual Agent Provocateur fare too. You’ve still got floaty nightwear, frilly babydolls, delicate lace bra sets, and an ultra-decadent robe.

Also, randomly, a leather bodice* that looks like it was inspired by the Renaissance era, and which has been styled over a 70s-esque blouse bodysuit*! Plus a Creepyyeha-like ‘bondage belt’ with a giant O-ring to come soon too. The collection is all a bit of a mish-mash really in terms of aesthetics, but there’s some nice stuff in there. This is Agent Provocateur after all. 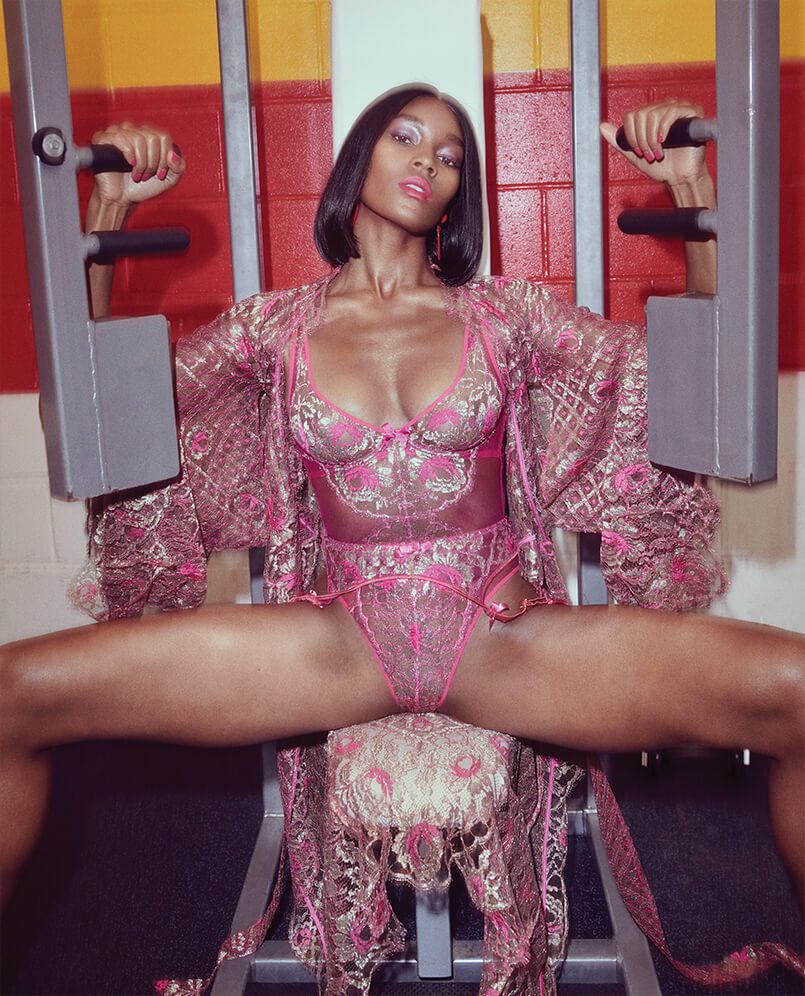 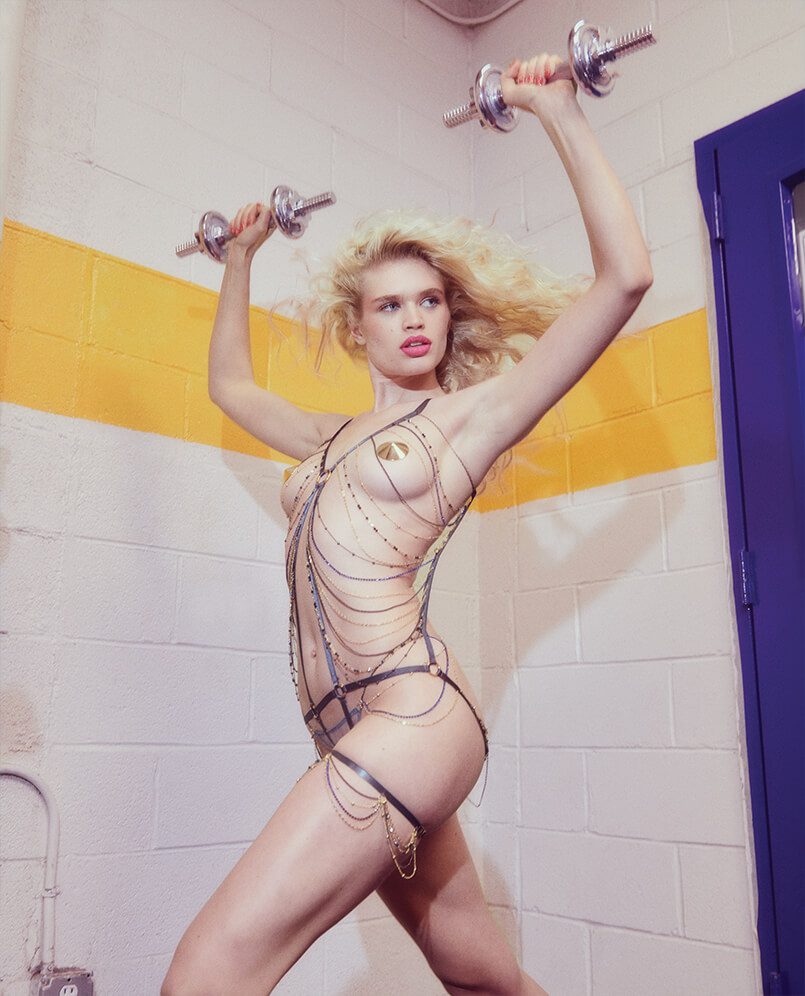 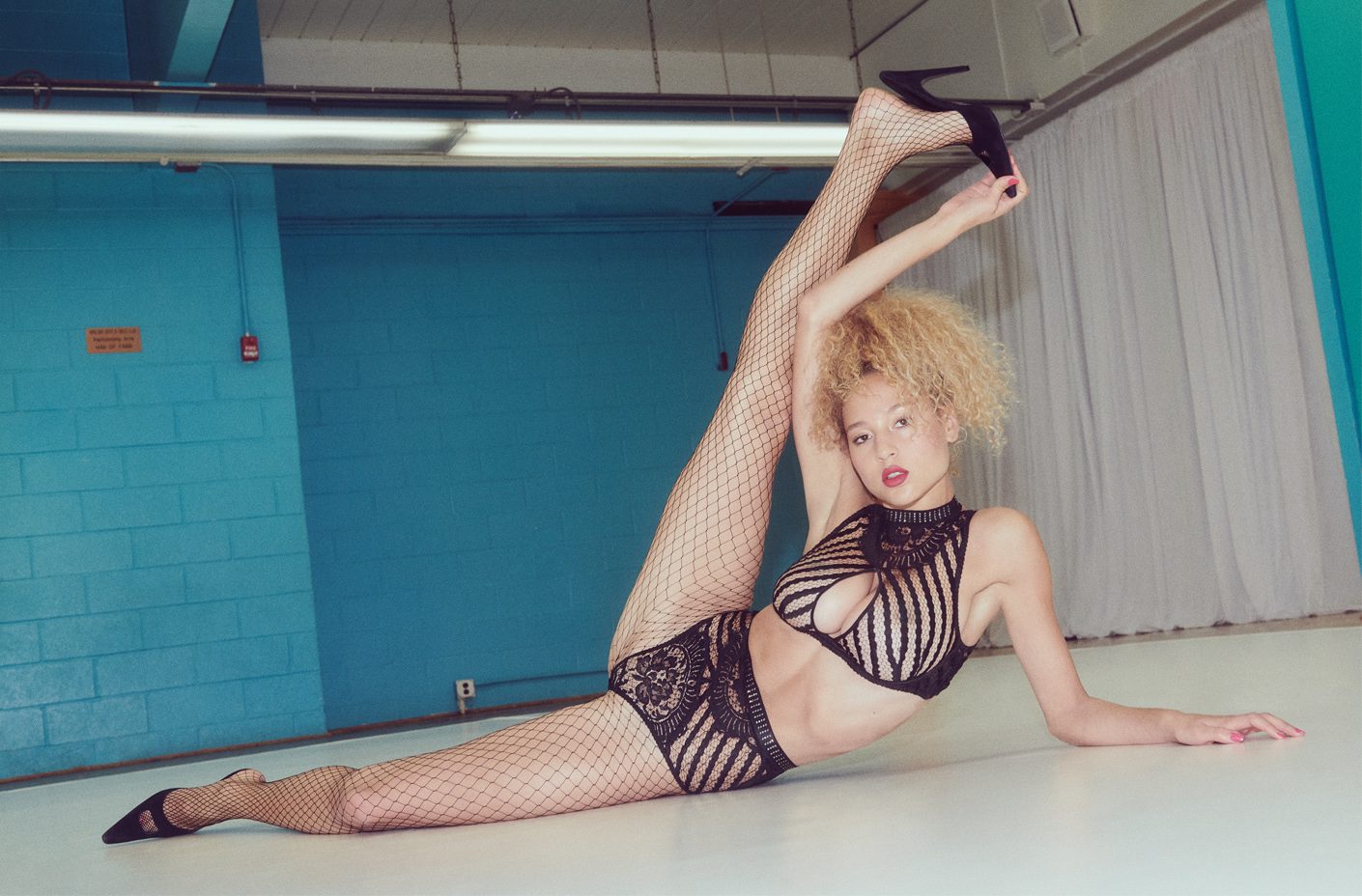 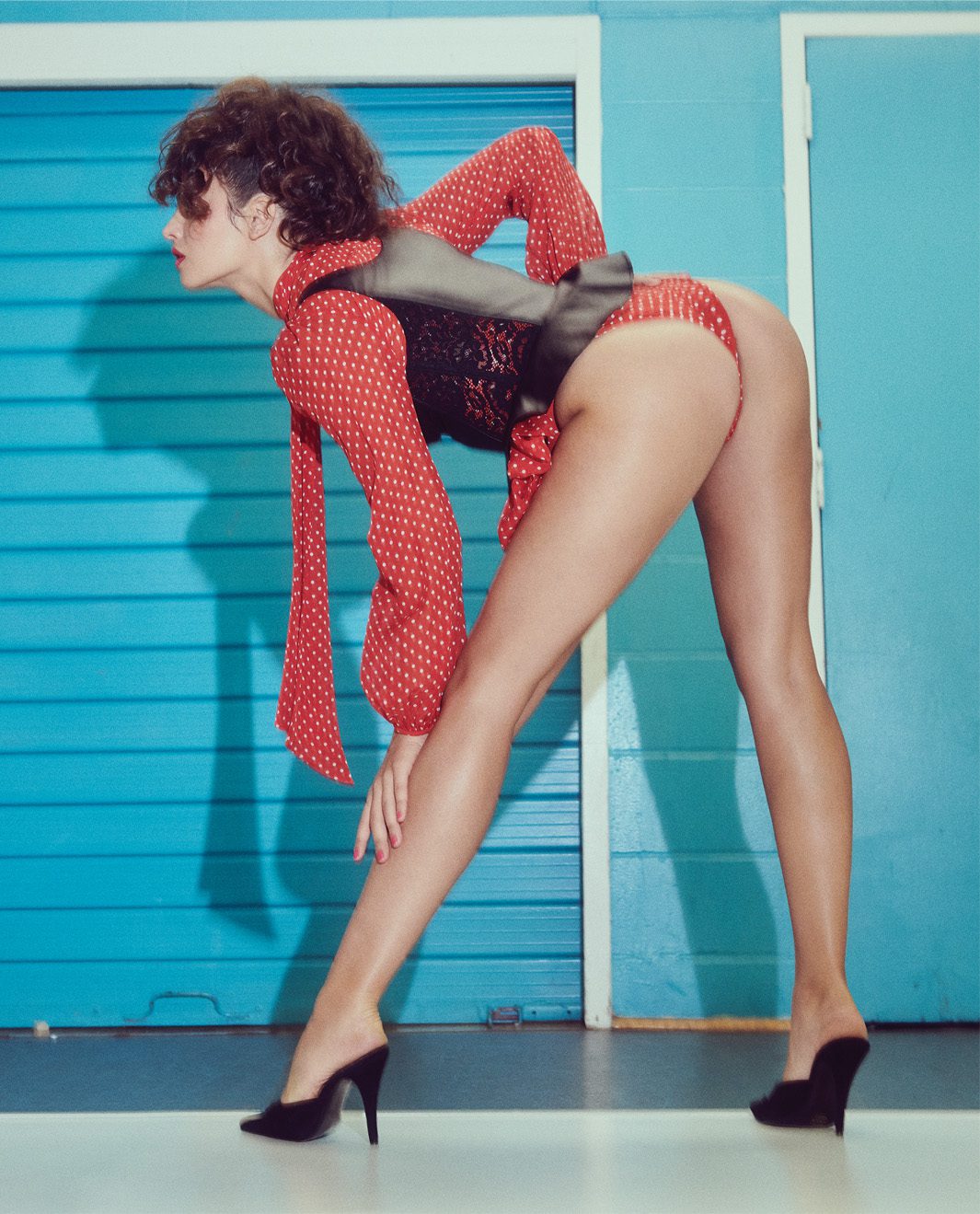 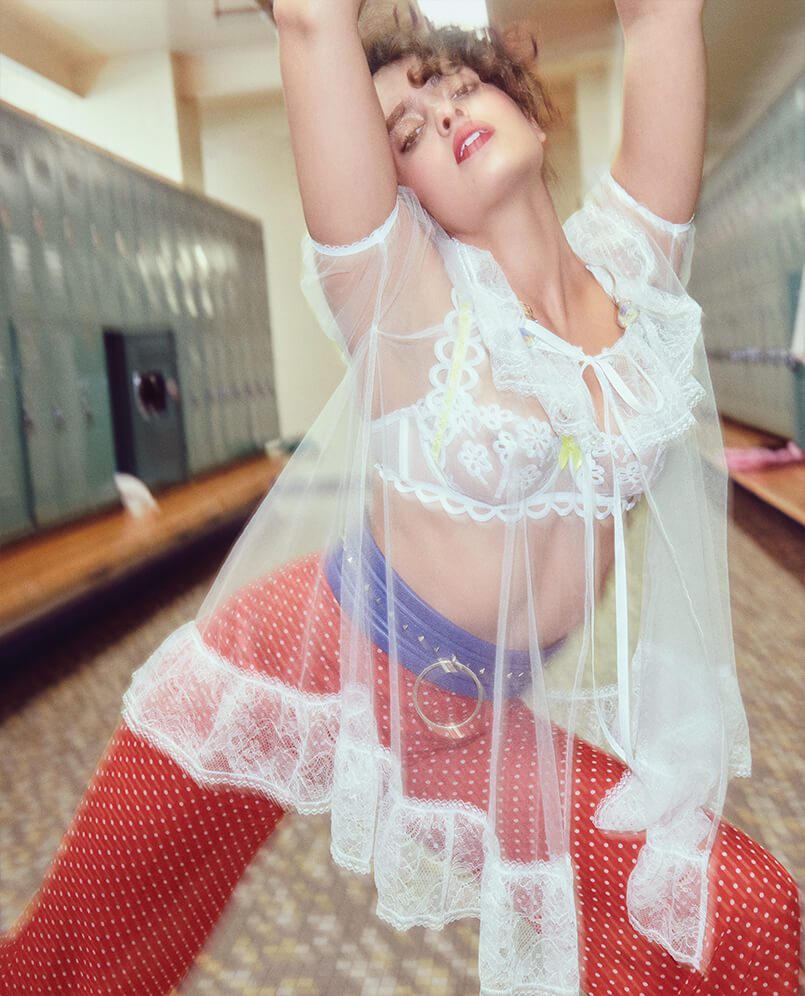 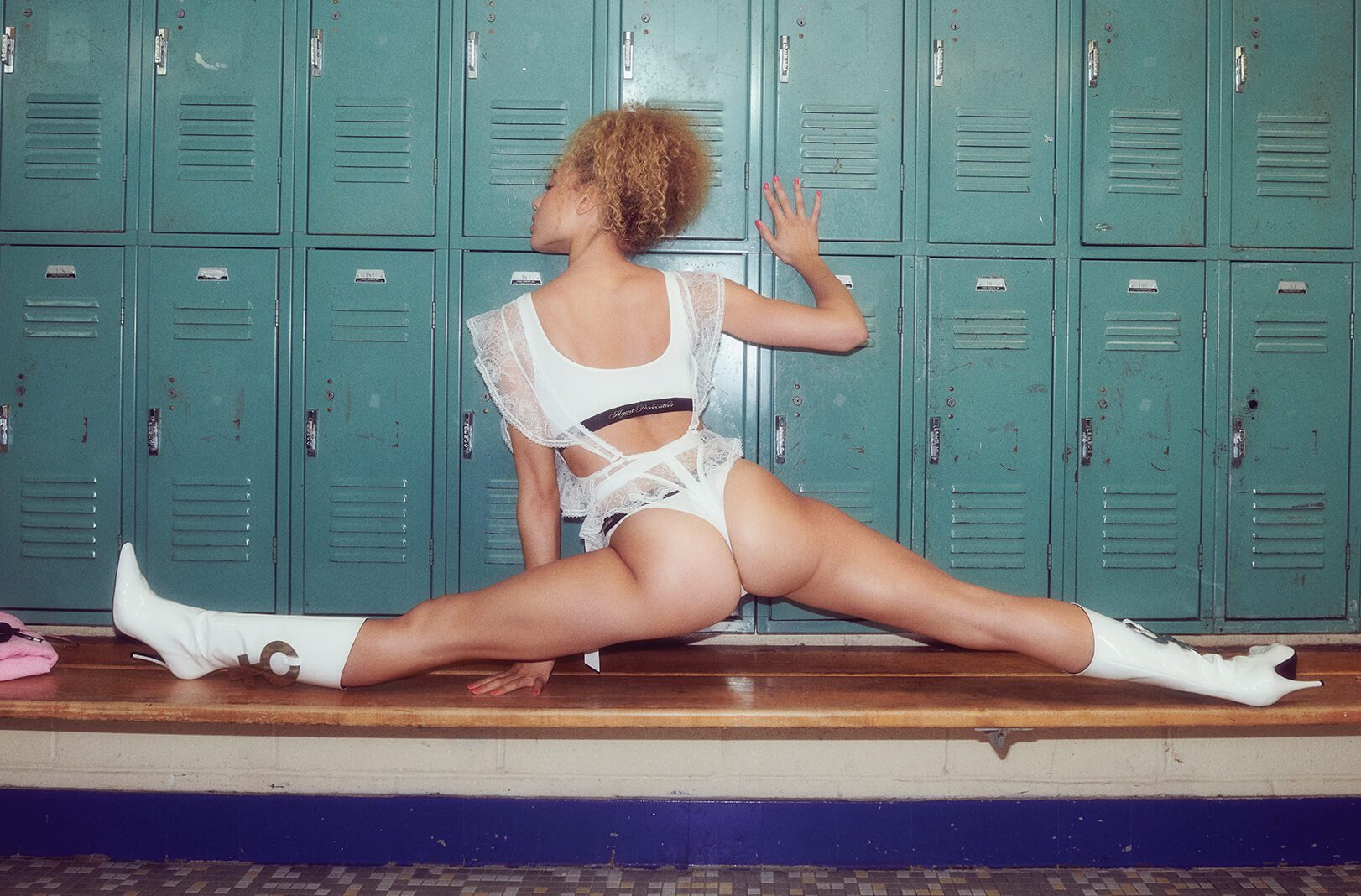 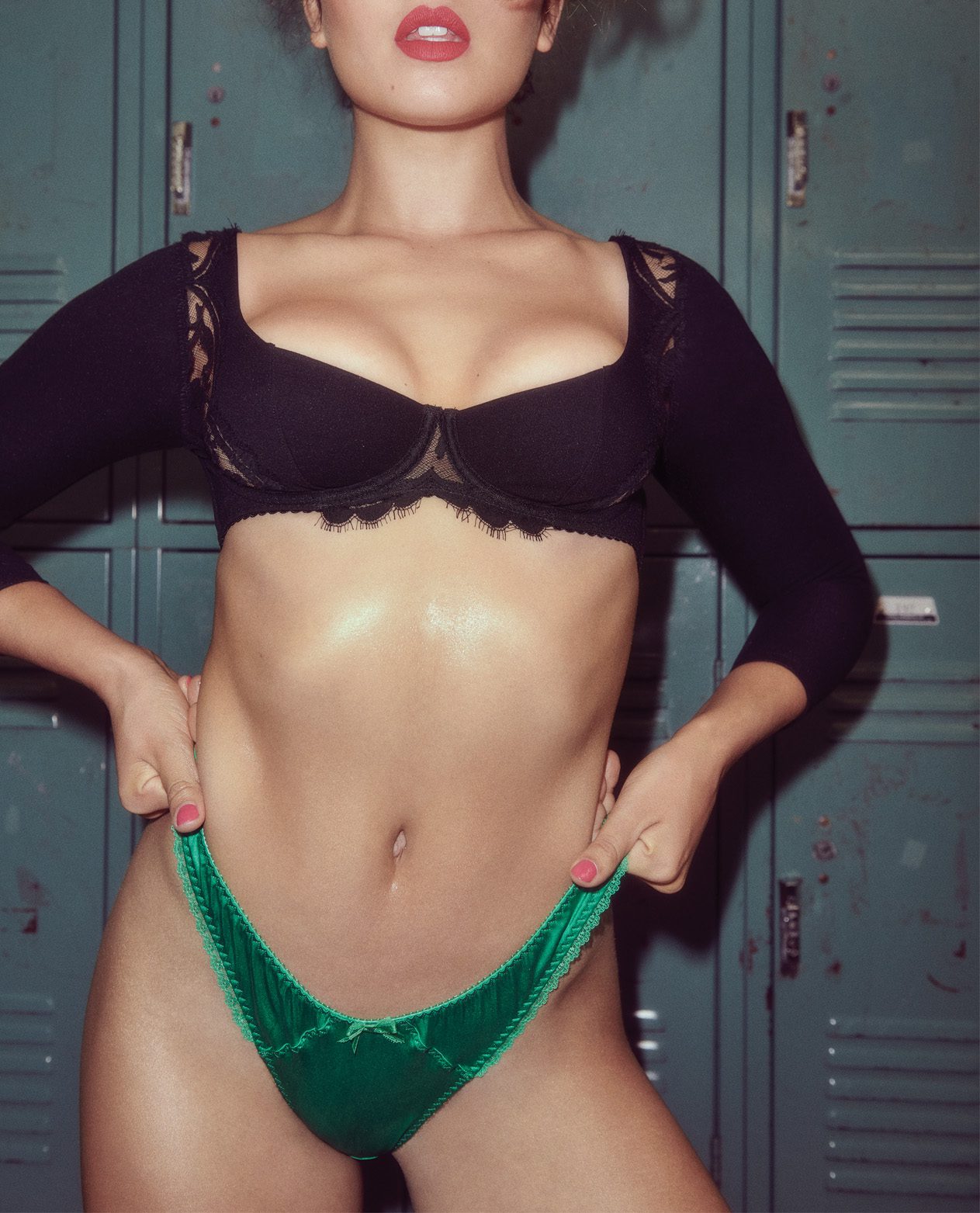 The lookbook imagery doesn’t kill me, but I do love the video. It really brings the campaign to life. All the upbeat energy of an aerobics class, but with pretty lingerie! According to the press release, the aim “is to make women everywhere feel powerful and energetic, like they want to go out and dance all night (in Agent Provocateur, naturally). It is also a message of motivation: pump it up in every aspect of your life and give it everything you’ve got.”

I wish they’d left it at that. As a fun, energetic campaign, Pump It Up works wonderfully. But then they went and tried to sell it as a body-positive one too: “The aim was to showcase a group of talented, strong women with diverse body types”. Only, these models’ shapes and sizes hardly differ.

Body positivity is a big marketing trend for brands right now, but it’s supposed to be more than just a tagline to use when they want to seem relevant. There’s no need to shoehorn a campaign under that umbrella that really has nothing to do with it. (If Agent Provocateur really is committed to embracing larger sizes, then more like this year’s Valentine’s campaign please. It might not have gone far enough, but at least it was a genuine step in that direction).

That sentence of the press release aside, I really like Pump It Up. Is there any lingerie here I feel like I must own? No. But it sure does make me want to skip the sporty tank tops and put on a fancy leotard or bodysuit next time I’m practising my splits!

Pump It Up is styled by Ursina Gysi and directed by Charlotte Wales.

What do you think of Agent Provocateur’s SS19 Pump It Up campaign? And the lingerie and swimwear featured in it?

The product recommendations directly above are affiliate links
agent provocateurlookbook

Elyse On Mars: Handmade, Hand-Dyed Lingerie Up to...