Disclosure: I received this set free of charge (except for customs fees) from Burgundy Fox when reviewing their lingerie subscription service – you can read that piece here. I decided I wanted to review the lingerie itself too, but this article is unaffiliated with either Burgundy Fox or Blush.

As the disclosure says, I received this set in a subscription box. I had no idea what was going to be inside, and it’s not something I’d ever have chosen for myself. The shape, the colour… it’s just not my usual style. But it fit well and felt comfy on, so I started wearing it, and then something strange happened – I realised I’d actually been wearing it a lot.

I haven’t owned any lingerie by Blush before. They’ve been around since 1988 but are based in Canada, and with shipping to Europe being somewhat pricey, I’ve never really paid the brand much attention. Whilst writing this review I also spotted that they’re charging non-Canadian customers more for their products. A 25 CAD item becomes a 25 USD item for everyone outside the country, which equates to a 33% price hike. Since moving to Spain I’ve noticed just how many brands do this – the EUR version of an item is so often more expensive than the GBP one – but common as it may be, it still feels pretty shady.

But I’m digressing, let’s get onto the review! 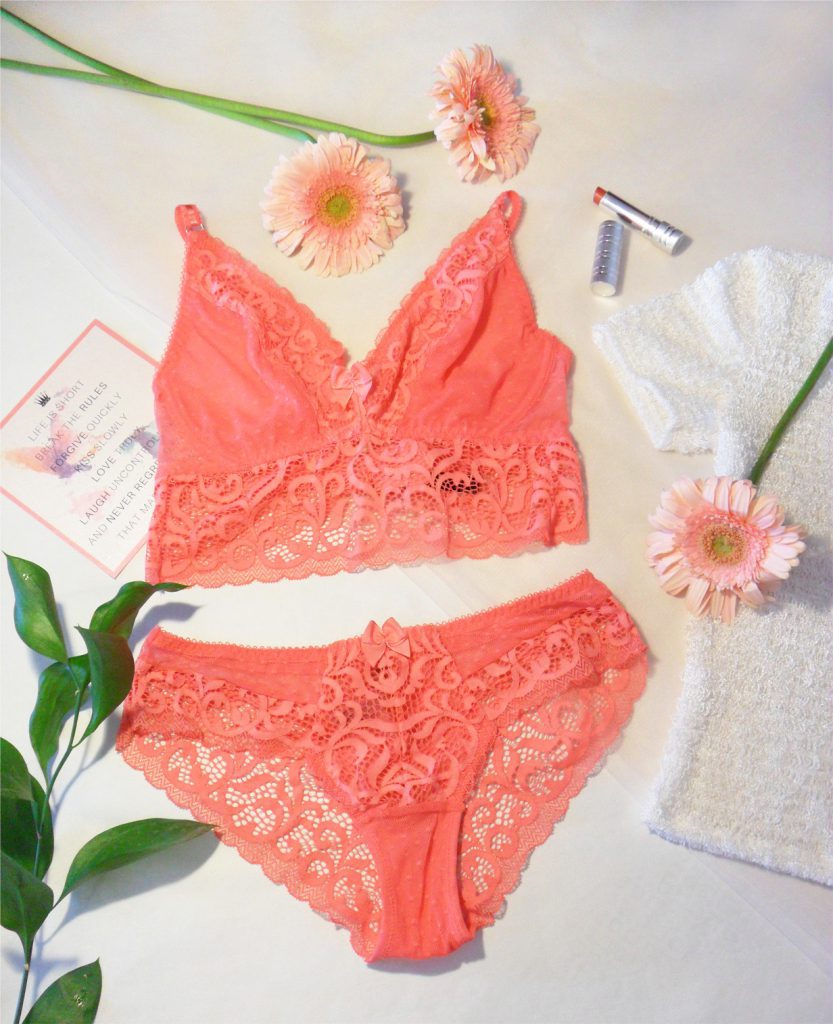 Although I’ve said that Reverie isn’t my typical style, there is one thing I like about this range – the lace. It’s made from a wide net with a flat, embroidery-like floral pattern. I particularly like the longline bra band as a way to show its pattern off.

The lace is broken up with polkadot mesh, and the straps are nice – satin-striped elastic with picot edging and gold-tone hardware. It’s overall a cute, simple-but-sweet basic that’s really rather pretty. 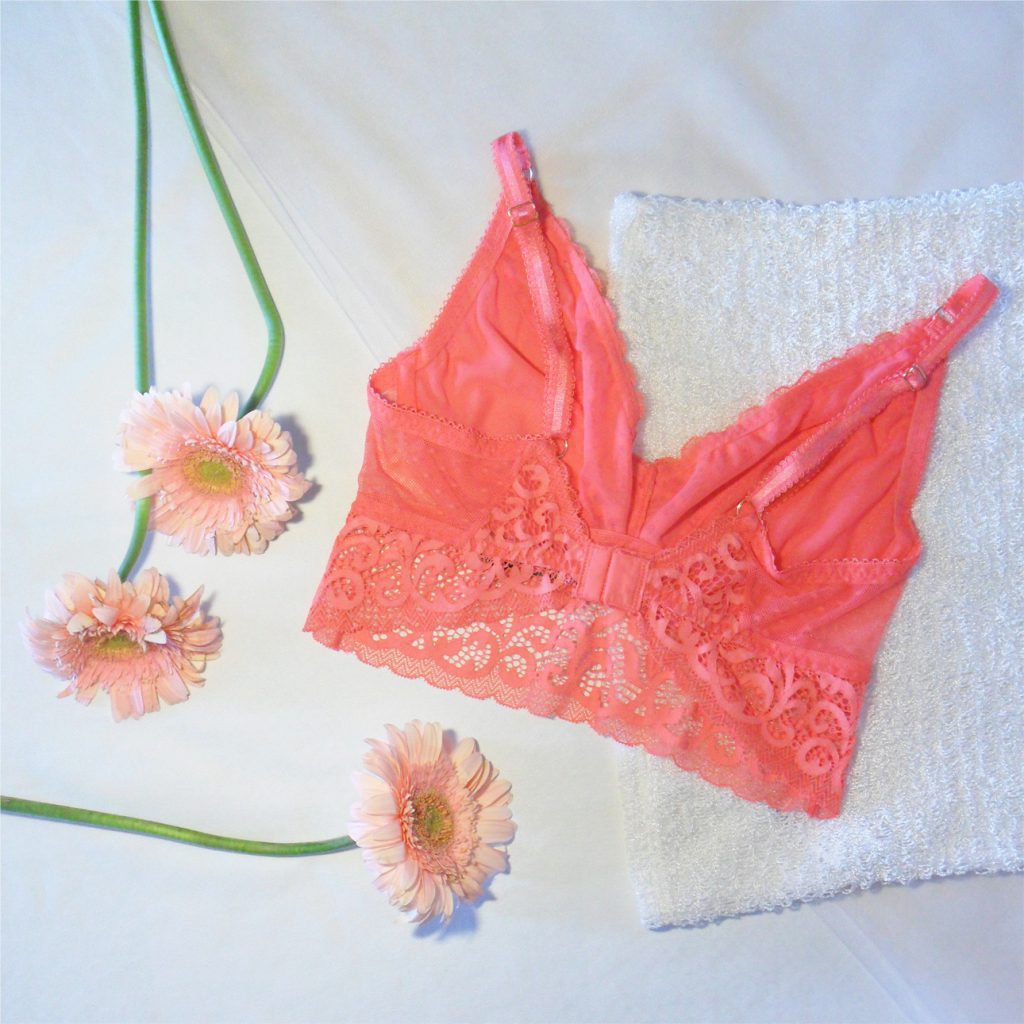 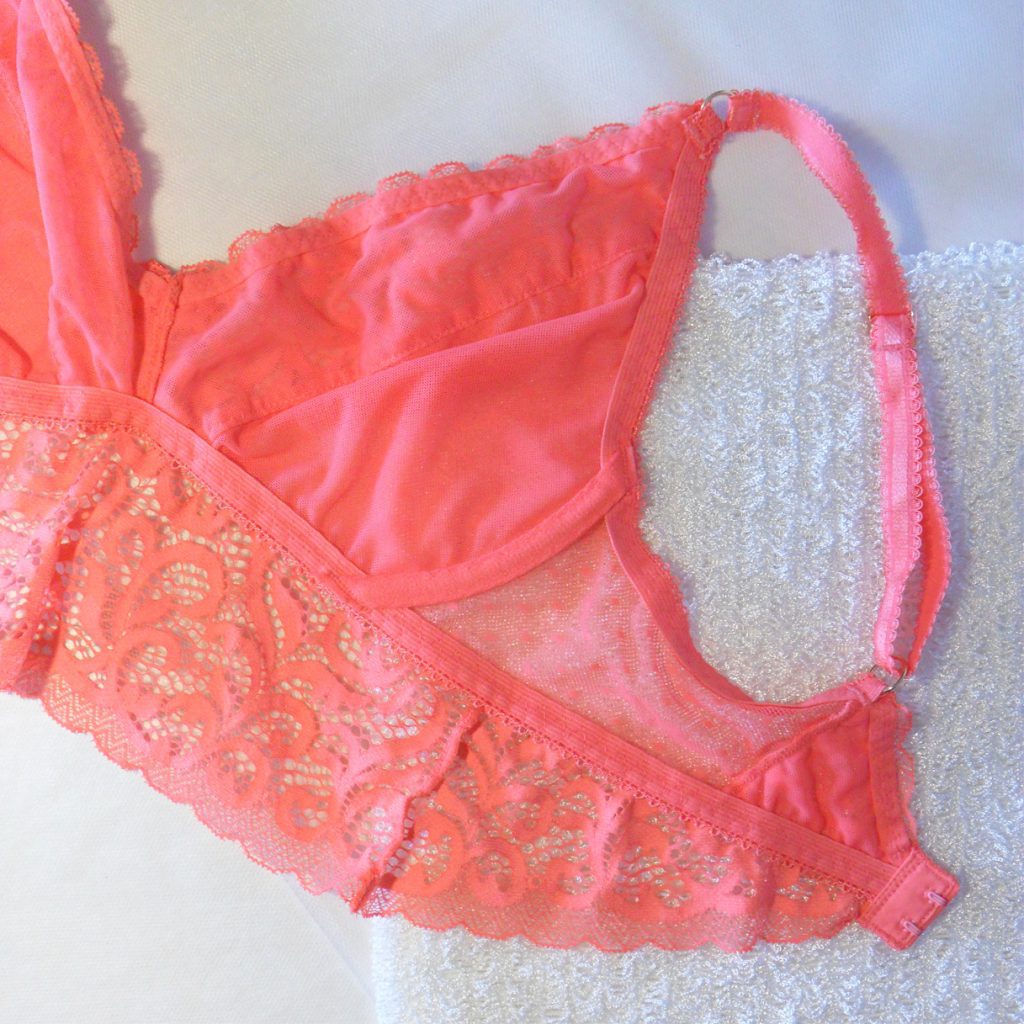 The Reverie bralette and hipster are both well-made, with neat and secure sewing throughout. The cups and centre-back of the band (either side of the hook-and-eyes) are backed with mesh for added support. The most interesting feature though is what Blush describes as a “1/4 wire”, something quite a few of their bralettes come with.

You know how some bralettes have a short plastic bone at the side of the cups to add stability to the band? This is similar, except instead of boning, it’s a little piece of bra wire that follows the curve of the breast. Which is unusual – not a construction detail I’ve ever seen before! It’s not an underwire so don’t expect it to offer any lift – this is still essentially a wireless bralette. But if you’ve got breasts that splay out sideways, you may find that the wire helps to keep breast tissue forward and inside the cups. It also anchors those cups in place. 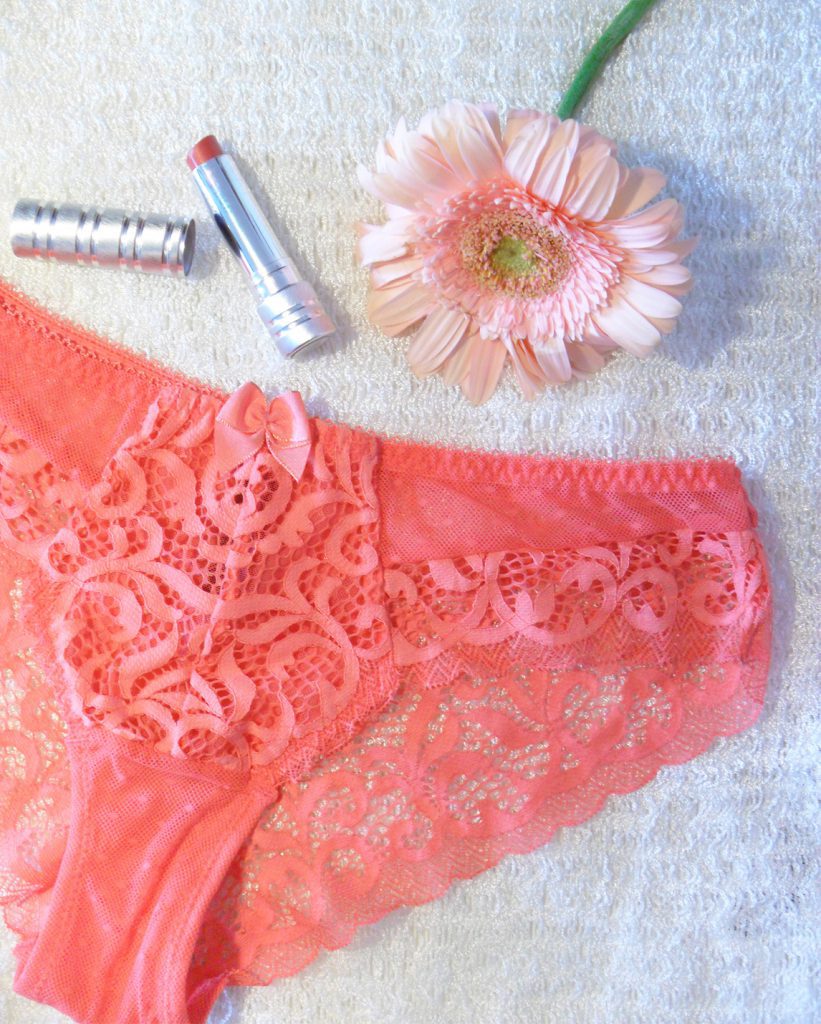 I was sent an XS brief and size S bralette, and as I’ve already mentioned, the fit is great. For reference, XS is my go-to for all clothing, so the bottoms fit true to size. They’re elastic-free all round the legline too and the lace is nice and stretchy, so there’s absolutely no cutting in.

In bras, I usually wear a 30DD. The band here feels like a 32 because it rides up just a tad. The cups are stretchy and sit perfectly flush against my chest, but could accommodate a cup size larger or smaller just fine. According to Blush’s size chart, it’s supposed to fit a 32C-D or 34A-B, which I think sounds about right. I would have preferred the tighter band of the XS bralette but then the cups would have been too small, so overall I’m very happy with the way it fits me. 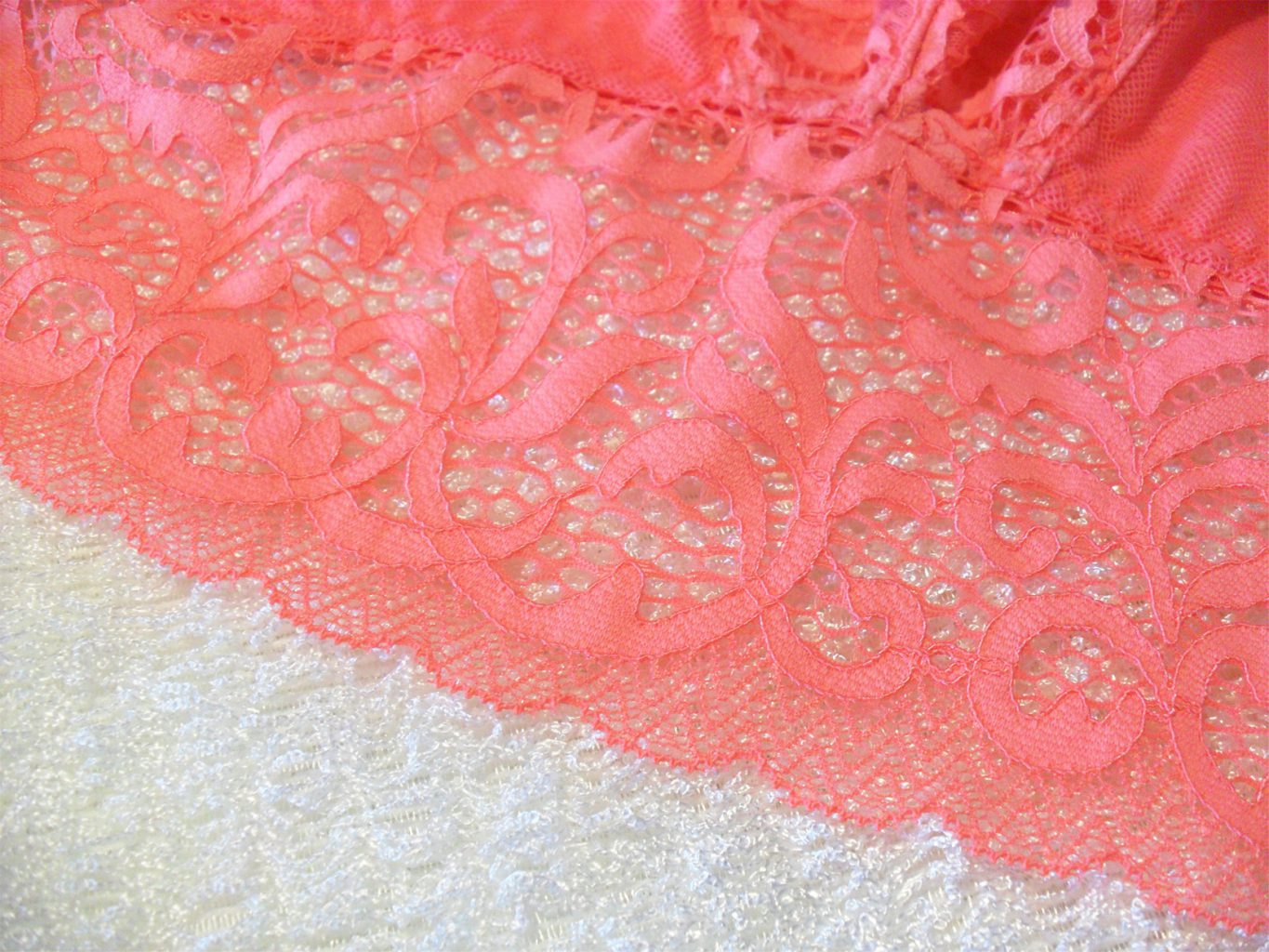 I’ve had this set since January and have been wearing it once or twice a fortnight, and it still looks practically new! I’ve been checking it for at least some little sign of wear to mention, and there’s just nothing. Both pieces have been hand-washed, however only the bra says to hand-wash on the label; the knickers can be machine washed for easy care.

I’ll go with the USD prices since that’s what I would have paid as a European customer (to pay in CAD, you can only ship to a Canadian delivery address). The Reverie bralette costs $52 (~£39 / ~45€) and the Reverie hipster is $32 (~£24 / ~28€). It’s not particularly cheap for being a non-cup-sized, made-in-China bralette. For comparison, Boux Avenue (which I feel is of similar quality) has lacy, longline bralettes from £12 to £24, albeit without the side-wire feature.

However, it’s not crazy expensive either. And for how well the set has held up to regular wear, I definitely think you’ll get your money’s worth. 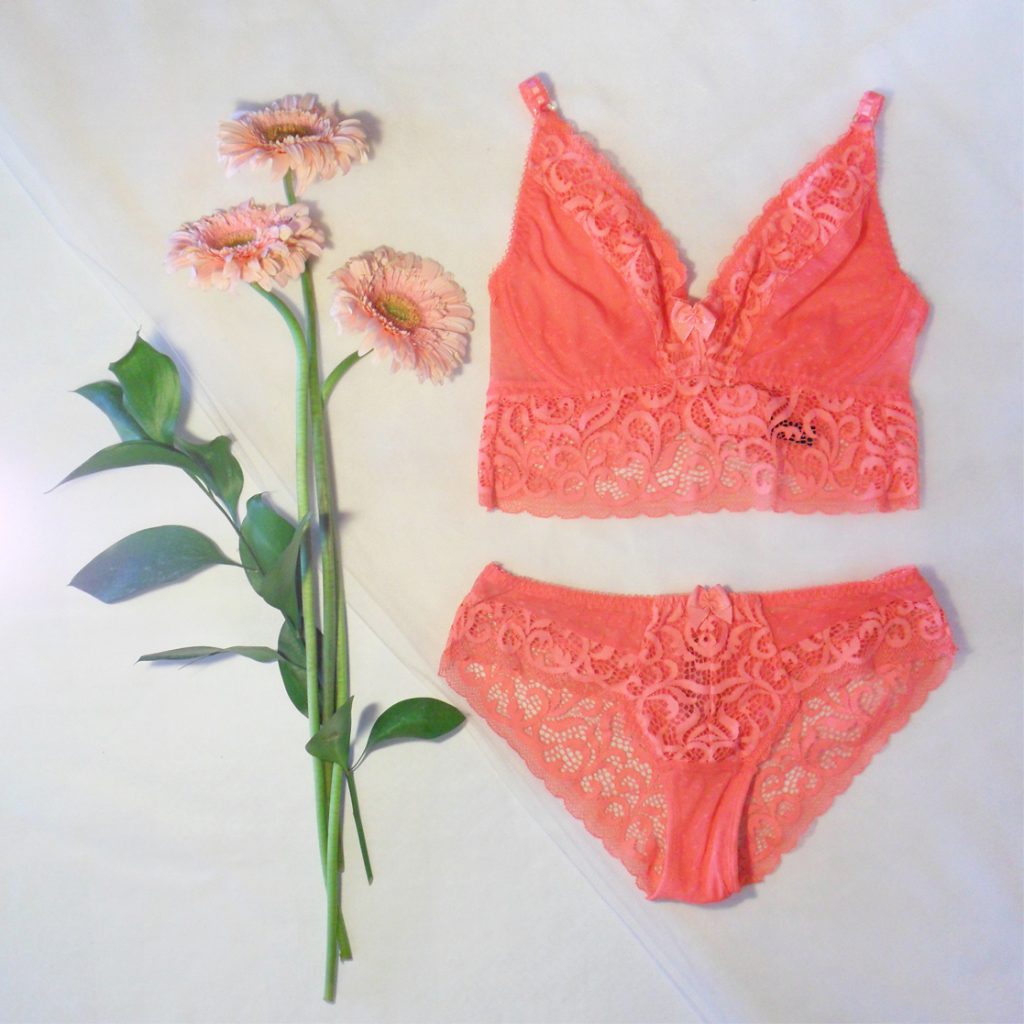 The Reverie bralette set also comes in black, cream and a purpleish-navy. Or if you’re loving the coral but not these particular pieces, there’s also a structured chemise and thong available. Sizing on everything runs from XS to XL, to fit up to a 36E/38DD and UK size 20-22.

Have you ever bought from Blush lingerie? What do you think of this Reverie set?

The product recommendations directly above are affiliate links
blushbralettescanadian lingeriereview

Hello ladies,
I want to give this is my current experience with Blush Lingerie. Well, I do not put this review out of anger; but I care about customer rights and the wholeness of online shopping business especially we are increasingly dependent on this particularly in this pandemic. So, i take my precious time to write this experience for you to learn and avoid trouble for yourself.

I ordered two sheer bikinis from Blush Lingerie. This is my first time ever to shop with this online store. I saw their website with the bikinis I like the style and color. So I ordered two pairs of that bikinis.

They shipped to me; when I opened the box, there are only two panties! and large size that I am pretty sure too large for me. I never try them on because I knew something wrong and wait until straighten it out.

I contact Blush. They said they sold separately tops and bottoms and they do not have bikinis, only lingeries and lingeris are all final sale, but not return!!

I told them that this is wrong because you put wrong information that I took them as bikinis and you do have return policy and I have met all the requirements for return.

they still refuse my consumer rights.

Well, this is really bad online shopping experiences I have had for a long time because I decided not to buy much from online.

I would leave them one star for terrible services that coerce me into buying something and gives me different things and falsify for their wrongdoing and even worse is taking away my consumer’s rights of able to return the merchandise.

They violate all the most ethical crucial points for a long term and healthy business just trying to steal my little money!!
That is obviously not smart strategy for a business to survive.

We should make online shopping a much more ethical and respectful consumers’ rights. I do not abuse my rights of return. I meet all the criteria and I was mistaken the item because of their intentional deficit information.

So, i let you know. Please take my lesson and KNOW YOUR RIGHTS!!

Sorry to hear you had a bad experience with this brand. Is it possible that you did mistakenly buy lingerie rather than swimwear though? ‘Bikini’ is the name of a style of knickers/panties. Blush does sell swimwear so I don’t know why they’d say they don’t, but I can’t see any sheer swimwear on their site right now.

Hello, I do not know. Obviously, there is some confusing information how they present the website; and that is not my fault especially I am the first time customer to visit them. Well, I think they should agree for me to return the intact items at least. That shows a good business. I never wear them, never do anything, even not open the plastic. I think they do not respect my customer rights. I think any online shopping on a long run business, they should respect customer rights to be able to compete in a healthy online shopping environment. If customers are afraid of things like this, how can they continue to shop with them? Just common sense.

Unfortunately, I checked Blush’s returns policy and they do state that items marked ‘final sale’ can’t be returned. Here in Europe that would not be allowed, but since Blush is in Canada it looks like you’re out of luck.

Some retailers have a strict ‘no returns’ policy on lingerie or swimwear products for hygiene reasons, regardless of whether the packaging has been opened. While I don’t necessarily agree that that should be the case, if it’s their policy and it’s not against local law, there isn’t much you can do. I would definitely recommend checking the returns policy before buying lingerie or swimwear in future!

Hii! Im kinda worried about their sizing! Do theu fit Larger or smaller? I just followed their size and fit chart! So i got a 31 waist and 40 hips! I based on their skze chart now Im worried that it will fit Larger on me!

Hi Mary, based on this set and two fitted chemises I’ve tried on by Blush, I’d say the brand generally fits ‘true to size’ so you should be fine in your usual sizes.